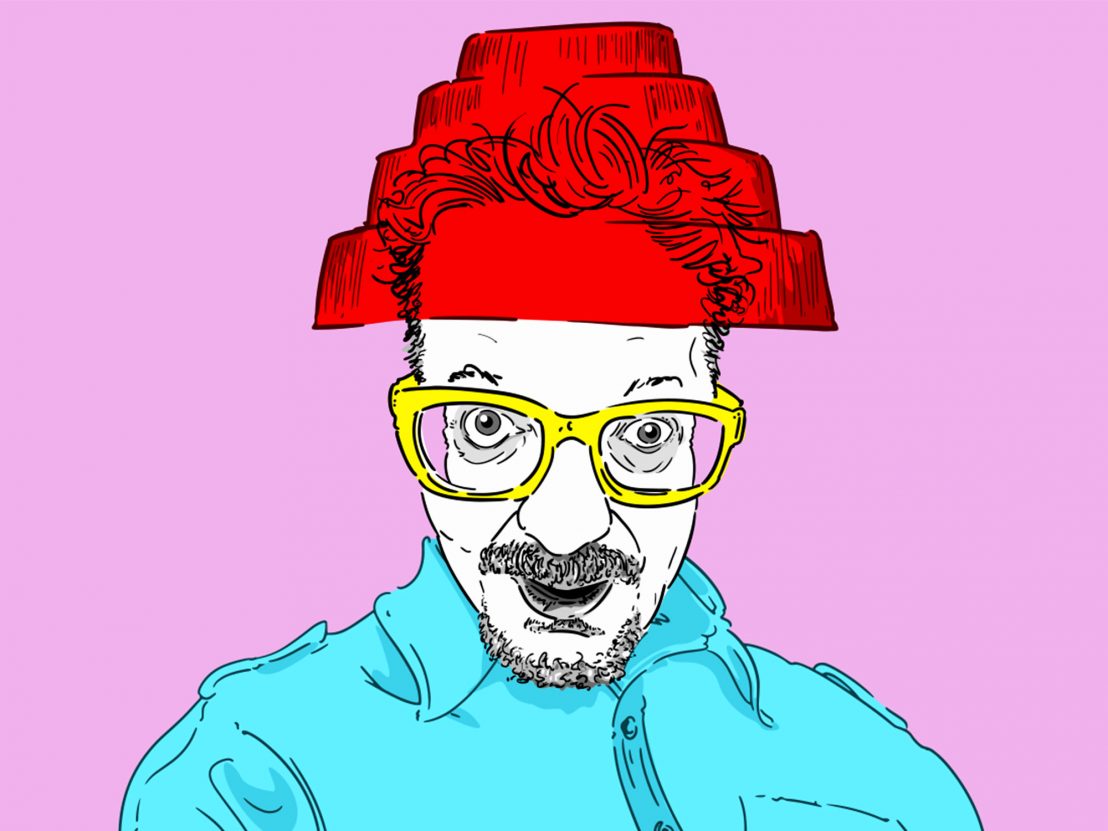 As the co-founder, lead singer and keyboard player of pioneering new wave band Devo, Mark Mothersbaugh carved a reputation as one of the most distinctive frontmen in rock music, with the band’s striking dome hats, unique sound and satirical, often surreal, live shows garnering a cult following. As a composer, he has scored a number of TV series, notably including all nine seasons of Rugrats, while his film work has straddled multiple genres including regular collaborations with Phil Lord and Chris Miller on the likes of Cloudy with a Chance of Meatballs, the Jump Street series and The Lego Movie.

Yet it’s Mothersbaugh’s work with Wes Anderson that remains among his most memorably and well known. Having first met in the mid-’90s, the pair have since gone on to develop a fruitful partnership over four films. With the Criterion Collection releasing The Royal Tenenbaums on Blu-ray in the UK for the first time, we sat down with Mothersbaugh to reflect on his work with Wes, the duo’s plans for a theme park and everything in between.

On seeing Bottle Rocket for the first time

“There was a woman, Pam Lillig, who worked at Sony in the music department and she said, ‘I know you’ve never heard of the guy, but you should come and check this film out. He needs a composer and any of the suggestions that his producers or the film company are giving him, he doesn’t want to use any of those people.’ So I went to a screening out in Santa Monica and it was one of those things where kids got to go for free. They ate their free food and they left right in the middle of the movie. I remember him telling me a couple of days later, ‘You know, Mark, they told me that that was the biggest walkout that they’ve ever had for any of their films.’ It’s kind of the way they do their focus groups. People were writing things like, ‘We didn’t see any tits,’ or whatever. Those were the comments that were coming back, but I saw this film with the temp music and knew right away that this guy had an original voice and an interesting take on our times.”

“Wes was fresh out of college and had done a smaller version Bottle Rocket while he was at school, but he was telling me that the producers were kind of panicked. They’d go, ‘How come it looks like your student film?’ and he’d say, ‘Well, what did you think I was making?’… And we talked about music and he said, ‘They don’t get my music ideas at all.’ But he was very articulate and he was a passionate artist. You don’t meet people like that every day. I’m in a business where you read a script and you go, ‘How are they gonna mess this up?’ And then you sign on, they give you a copy of the film and you go, ‘Oh, that’s how they’re gonna mess it up.’ There are so many things that can go wrong. At first I thought, ‘How can there be so many bad films?’ After I worked in Hollywood for a while, I went, ‘How can anybody make a good film?”

“In Bottle Rocket, Wes wanted all these very high-pitched sounds. By the end of the first day, I understood that he didn’t like bass sounds. He didn’t like brass. He liked plucky instruments and bells and flutes and piccolos. He developed a palette over the course of those first four films to the point where he became comfortable enough to use an orchestra and to even record outside of my studio. For a while he would just want to sit in here with me. We couldn’t go to a soundstage. And because I didn’t have a big enough room to bring in a 40-piece orchestra, we’d bring in six to eight people at a time and they’d leave and something that would have taken one afternoon on a soundstage would take us a week.”

“Wes had something that he played me, some Italian opera. It sounds hard to believe when you listen to that score for Rushmore, but he was playing opera and when we would listen to Vince Guaraldi in the first film, by the second film we were listening to other things, including going a little more jazzy, like at the beginning with [the musical cue] ‘Hardest Geometry Problem in the World’. That one we still recorded it in an empty bedroom at my house, so we were still recording up in the hills in Hollywood at that point.”

On scoring The Royal Tenenbaums

“Wes loves harpsichords. There was this grumpy old lady on Larchmont Boulevard, who does harpsichord rentals for the orchestras in town, and he enjoyed going with me there and playing all the clavichords and harpsichords and trying them all out to find which one of them was going to be used in the film. By the time we got to that film we had worked together long enough that I was already sending him music while he was still shooting. So he would have music to play through headphones while he was directing; a number of the themes for that film were written already by the time he was shooting.”

On covering The Beatles and George Harrison’s death

“I remember recording ‘Hey Jude’ at my studio and him coming out and singing and I put together singers for it. Wes even does some Michael Jackson yells in it. He was getting so excited that he went and grabbed the mic and started doing some little yells while we recorded it. It was right after George Harrison passed away. We knew he was ill and we heard about it and, just, it was kind of a really sad coincidence.”

On scoring The Life Aquatic

“Wes was living at, I think, the Chateau Marmont; my studio is on Sunset Boulevard, just a quarter mile walk away, so he would come over and sit on the couch and work on his script. One day he came over and I was writing some music for him. He said to me, ‘You know, Mark, this boat, these guys – they’re kind of like loser Jacques Cousteaus. They haven’t had the same financial success that Jacques Cousteau had but they’ve been doing this since the ’70s, so while other people would have gotten new equipment by the ’80s, they’re still using the same old stuff that they bought when they first bought the boat. I was just wondering, what kind of synthesiser would they be using if they started out somewhere in the early ’70s?’ I said, ‘Well, let’s go downstairs and look in storage, because it would be all the early Devo stuff that I used to use. It would be the same synths.’ So we went downstairs and pulled some things out and pulled out an old Oberheim called a TVS1 and it had just a little eight-step sequencer in it, and that became an integral instrument. Thinking about what kind of instruments he would have on the boat was really fun.”

On turning down Spielberg and Zemeckis

“Wes scared me for a minute on The Life Aquatic. He said, ‘Would you want to be in the film?” And I said, ‘No way.’ I hate acting. I remember, I got offered film parts before. Steven Spielberg and Bob Zemeckis, I thought they wanted me to score a film and I came in and they said, ‘Well, we have this movie that we’re making where there’s this mad scientist and it’s called Back to the Future and we think you’d be perfect for it. We saw you on stage last week and we thought you’d be great for it.” I just went, ‘Oh, no, no. I don’t know how to act.’ And they go, ‘Come on. We saw your films that you’ve made.’ And I go, ‘Yeah, but I made that stuff up. I can’t do what you want me to do. I have to do what I do.’ I just remember leaving thinking, ‘Man, I thought they were gonna ask me to score it,’ and being kind of bummed out.”

On plans for a Wes Anderson theme park

“The blueprints are being put down for it. After my catalogue, ‘Beautiful Mutants’, came out, I got quite a few resumes from people who all wanted to work on it. It was kind of interesting to get all these things from people who were like, ‘Yes, I’ve worked on theme parks in Japan and I would love to work on your theme park.’ We talk about it now and then and there are some people who are very serious about pushing us along on it. You never know…”

The Royal Tenenbaums is now available to buy on Blu-ray courtesy of the Criterion Collection.