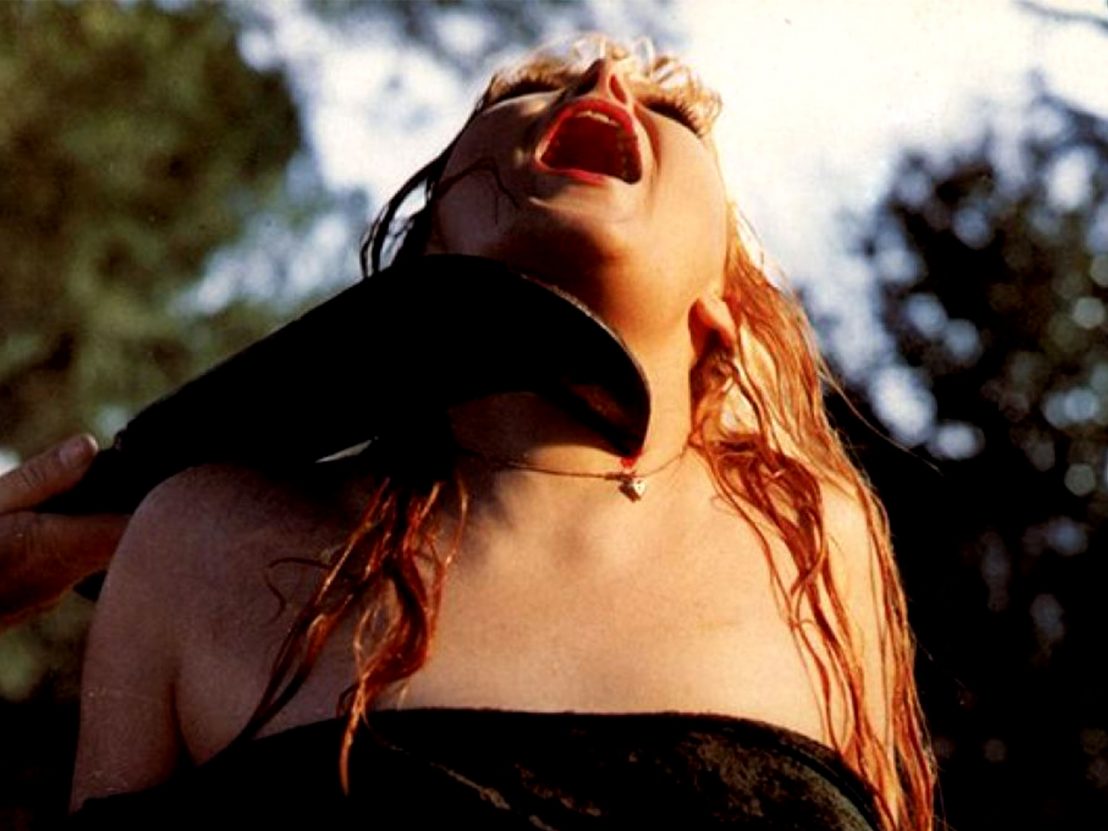 Mario Bava’s A Bay of Blood opens with a shadowy figure placing a low-hanging noose around the neck of elderly Countess Federica Donati (Isa Miranda) and kicking the wheelchair out from under her. This would appear to be a giallo – the Italian subgenre of stylised whodunnits that Bava helped invent with his influential films The Girl Who Knew Too Much and Blood and Black Lace – yet there are also signs that Bava is heading in a new direction.

The killer may, like the villain in a classic giallo, appear in shadow, with face out of shot and hands covered in black gloves. But then the camera pulls up to reveal his face, much as Bava’s Hatchet for the Honeymoon, from the previous year, had made no attempt to conceal the identity of its killer – who was also its protagonist. Then, in another twist of the knife, as the Countess’ killer, who we later learn is her playboy husband Filippo (Giovanni Nuvoletti), lays out a falsified suicide note for the Countess, he too is killed by an unseen assailant.

That is a double murder (and a pair of murderers) in just the opening few minutes of A Bay of Blood – and there will be many more of both, as the film’s baroque body count is nearly matched by the sheer number of its killers, in a pass-the-parcel clusterfuck of conflicting interests and crossed purposes that would have done the Coen brothers proud had they been old enough to watch this in 1971.

This sordid tale of multiple murders also comes with multiple titles. It was announced in Italy as Antefatto (‘Before the Fact’), but released as Ecologia del delitto (‘Ecology of Crime’), then withdrawn and rereleased under the new title Reazione a Catena (‘Chain Reaction’), and finally as Bahia de Sangre (Spanish for ‘Bay of Blood’) – all titles which resonate in different ways with the film’s themes.

In America it was released as A Bay of Blood, then Twitch of the Death Nerve (a fantastic, if not entirely relevant, title), and finally, in an absurd attempt to capitalise on the recent success of Wes Craven’s 1972 debut feature, variously as Last House on the Left – Part II, Last House – Part II and New House on the Left.

Bava’s film may share with Craven’s a vague interest in the shallow veneer of human civilisation, and in how little it takes to push us into savagery, but far from being a story of rape-revenge, it tracks disputes between the Countess’ extended family over the her legacy (her house, and the woodland and bay beyond), and between local residents over the future of these natural environs.

When in horror mode, Bava has always been a filmmaker of eyes, and here there are eyes everywhere. The Countess’ manor house, the neighbouring home of eccentric entomologist Paolo Fossati (Leopoldo Trieste) and his tarot-reading wife Anna (Laura Betti), the nearby residence of ambitious architect Franco Ventura (Chris Avram) and the hut of the Countess’s illegitimate son Simon (Claudio Volonté) are all within sight of one another.

And everyone is watching and being watched, while those who are not scoping out their next victims are compromising themselves as potential eyewitnesses in need of elimination, like the four doomed co-eds (Brigitte Skay, Paola Montenero, Guido Boccaccini, Roberto Bonanni) who wander into this area looking for fun, without realising that they have entered an elaborate crime scene.

The focus on a gorily grotesque bodycount (listen carefully, and you will hear the exact number of dead in the film being predicted by one of Anna’s tarot cards) would have a profound influence on the future slasher genre, while those early scenes of young people being stalked and slaughtered in a waterside setting would particularly foreshadow the Friday the 13th franchise (for example, 1981’s Friday the 13th Part 2 also featured a machete in the face, and two sexually entangled lovers skewered by a single weapon).

Bava, though, dispenses with this quartet of interlopers quickly, preferring to focus on the complicated machinations of the locals, and of the Countess’ estranged stepdaughter Renata (Claudine Auger) returning with husband Albert (Luigi Pistilli) to claim her branch on the family tree. With backstories revealed in flashback, and different characters’ plots colliding messily to confound one another and leave a trail of corpses, the narrative of A Bay of Blood is certainly convoluted, but what emerges from the chaos is a cynical vision of people undone by their own baser instincts of greed and violence.

“Children should stay with their parents,” says Albert, surprised at how willing his wife Renata is to leave their young son and daughter alone while pursuing her own legacy and its associated monetary reward. As the film’s shocking final scenes will show, these children too have been watching as much as everyone else, and learning from the aberrant conduct of the adults around them. This cycle of malice and murder is their inheritance, far more than any property left by the Countess. This is a brutal, bludgeoning film, utterly misanthropic in its outlook, and all the better for its refusal to compromise in exposing human nature at its ugly, imitable worst.

A Bay of Blood is out now on Blu-ray by Arrow Films as part of their Macabre Visions: The Films of Mario Bava boxset (also including Black Sunday, The Girl Who Knew Too Much, Black Sabbath, Kill, Baby… Kill!, Five Dolls For An August Moon, Baron Blood, Lisa and the Devil and Rabid Dogs).