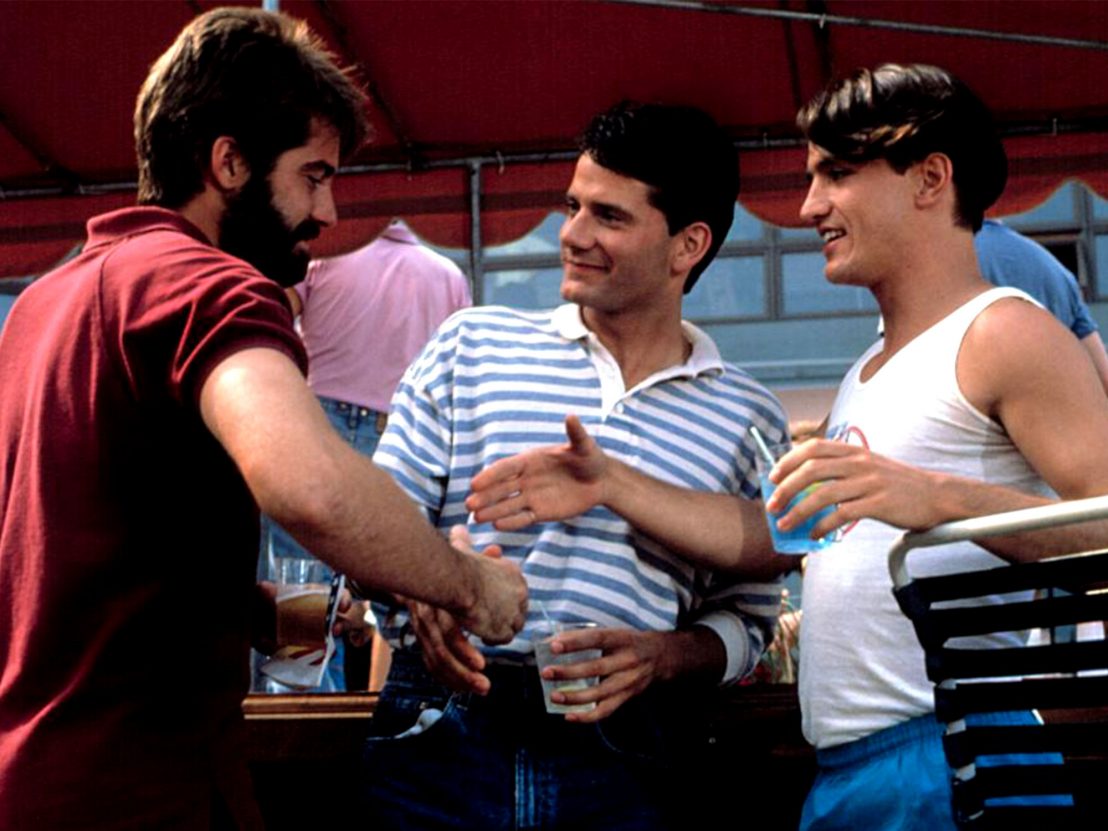 The 3rd of July, 1981 was a typical day for most New York City slickers. City transit fares had recently been raised from 60 to 75 cents, Kim Carnes’ ‘Bette Davis Eyes’ dominated the airwaves, pumping out of car radios and boomboxes, and Raiders of the Lost Ark was holding firm at the box office. But nestled 20 pages deep into that morning’s edition of The New York Times, catastrophe loomed in the form of a foreboding headline: ‘Rare Cancer Seen in 41 Homosexuals’.

This represents a watershed moment in queer history; the AIDS epidemic’s zero hour. This “rare cancer” was in fact Kaposi’s Sarcoma, one of the pathogen’s most prominently exhibited symptoms. While the infection had raged across America for at least a decade prior, it was no longer silent. It’s fitting, then, that the headline serves as the dramatic crux of Norman René’s Longtime Companion, the first film about the AIDS crisis to receive a wide theatrical release.

Spanning the first eight years of the epidemic, the film follows an eclectic group of gay men who spend their summers in the Fire Island Pines, a hyper-queer utopia of sweat, skin and sunshine. The central protagonists are introduced by way of montage – scenes juxtaposed between the Elysian parties in the Pines and New York City’s fast-paced urbanity as, one by one, they discover the article.

“I bought the paper every morning,” Longtime Companion screenwriter Craig Lucas tells LWLies. “I had turned to page 20, and I saw this thing: 41 cases. My blood ran cold. I called Peter Evans, who was an actor friend and a frequent lover. I said, ‘Pete, have you seen this thing?’ He said, ‘I know I have it. I’ve got to have it.’ And I knew that I had to have it, too. Everything that they were describing, here: the clap, genital herpes… I’d had every single thing that’s on this list. So I knew that I was going to die.”

Lucas eventually tested negative. The diagnosis of his then-partner Tim, who had slept with only two men prior to Lucas, came back positive.

In Longtime Companion, the community struggles to rationalise this sudden, apparently mortal threat; existential dread manifests through anxious phone calls and rampant denialism. “It’s the CIA trying to scare us out of having sex,” says John (Dermot Mulroney), an archetypal, energetic twink. A year later, John is dead. In the film’s transcendental denouement, the two remaining queer protagonists fantasise an ephemeral beachside reunion with the hundreds-upon-hundreds of friends that they’ve lost to the disease. “It was always my idea that there would be this mass illusion,” Lucas asserts, “It’s just a sort of wish.”

What makes Longtime Companion almost unique in mainstream American cinema is its humanist understanding of the epidemic’s staggering death toll. The title itself is lifted from the obituary pages of The New York Times, a euphemism used by editorial to describe the surviving partners of dead AIDS victims. In a shining example of the great queer aptness for dark self-depreciation, these columns would come to be colloquially known as the Gay Sports Page. “The subject of Longtime Companion was not simply HIV,” says Lucas, “it was about the transformation of a community.” Looking for their friends’ names in the obits became a daily ritual for urban queers.

This isn’t to say that the film’s broader existential study exists within a vacuum – there are a number of texts which take a similar community-centric approach. ‘How to Survive a Plague’, ‘And The Band Played On’ and ‘The Normal Heart’ all emanate the furious anger of queer action groups such as ACT UP and the Gay Men’s Health Crisis, struggling against legislative neglect to combat the crisis. Contemporary plays like ‘The Inheritance’ reflect the scale of the epidemic by pondering on the abject implications of losing an entire generation of queer men.

Longtime Companion’s pioneering stature is driven by René’s realist vision, one which defied the soap opera aesthetic of such television AIDS dramas as the 1985 made-for-TV movie An Early Frost. As Lucas explains, “Norman had the great aesthetic acumen to realise that if he shot the movie as if it was a documentary, with very flat light and not a lot of lush chiaroscuro, that you’d think a film crew had just walked in.”

The style now effectively goes hand-in-hand with the HIV/AIDS narrative; just look at recent releases like Dallas Buyers Club and 120 Beats Per Minute. It forces the audience to confront the disease at its most candid – not for the sake of exploitation, but to beckon empathy.

Lucas and René’s first collaboration was the 1981 play ‘Marry Me a Little’, but their relationship transcended professional ties. “We were close, we were very close,” Lucas recalls after a brief pause. “I think I pissed him off a lot. And I think he found me unacceptable on a number of levels, because we were so different. But we loved each other.”

René, who was diagnosed with HIV in 1987 – by Lucas’ partner, a medical practitioner – had to obscure his positive status from the producers of Longtime Companion, lying on medical insurance forms. “We were risking our own wellbeing,” adds Lucas. “If he had gotten sick, and it had been proven that we had all lied, we would’ve been carted off to prison.”

René died due to complications of AIDS in 1996, the same year the first protease inhibitors were authorised by the FDA, ushering in a combination of drugs which would eventually decimate the epidemic’s mortality rate. But access was not immediate. Unjust death prevailed. “There were very strict protocols for who could get them,” recalls Lucas. “I tried to get my partner Tim on them, he didn’t qualify, and he died. Same with Norman. It was enraging at the time and It’s enraging now.”

René’s is one of many names on the tragic list of New Queer Cinema auteurs claimed by the epidemic, alongside the likes of Bill Sherwood, Derek Jarman, and Arthur J Bressan Jr. These men suffered immensely, their suffering only propagated by the neglect of an impassive government. But 30 years later the legacy of Longtime Companion lives on. The legacy of the Fire Island Pines lives on. The legacy of Norman René lives on. Therein lies our responsibility: to never forget.