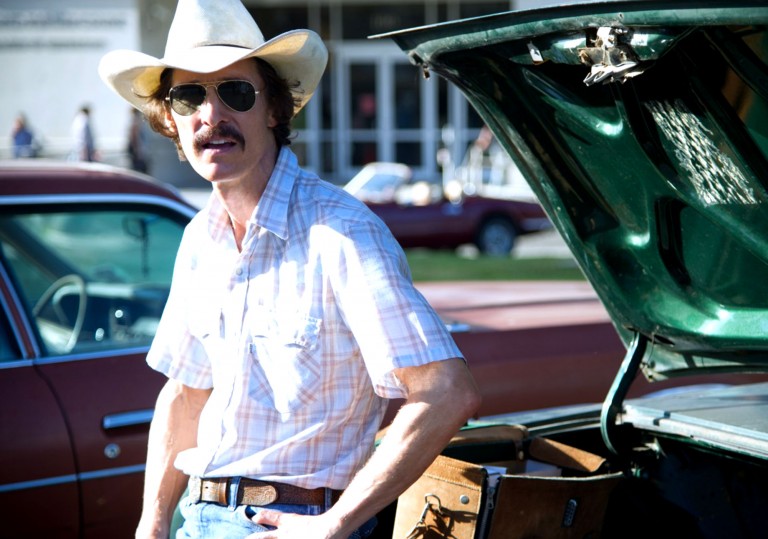 Jean-Marc Vallée follows up his sensitive portrayal of homosexuality from 2005, C.R.A.Z.Y.

A calculated prestige picture that never bothers to ask broader questions about the AIDS epidemic.

“I ain’t ready to crawl into a corner. I just ain’t fuckin’ ready.” These are the desperate words of a desperate man. Ron Woodroof (Matthew McConaughey), hellbent on outliving the 30-day projection of his doctor following an HIV diagnosis, transforms from an ironically homophobic, rodeo-loving electrician into a conscientious businessman and activist. Jean-Marc Vallée’s Dallas Buyers Club is based on the real story of Woodroof, who, after contracting the virus from unprotected sex, refused to participate in double-blind, placebo clinical trials for AZT (a highly toxic drug) in case he was fed sugar pills.

Woodroof finds help in Mexico from an unlicensed doctor (played by an undistinguishable Griffin Dunne) to manage his condition through a cocktail of proteins, supplements and drugs unapproved by the FDA. Woodroof sees the business opportunity in smuggling the drugs back to the US, though what begins as a cold business practice turns Woodroof from a homophobic entrepreneur into a sympathetic activist. In the ’80s, buyers clubs cropped up all over the US and provided self-administered alternative medical treatment to HIV-affected individuals in the form of monthly subscriptions.

Vallée’s seventh feature is a character study about Woodroof’s personal (and physical) transformation and his fight against the governmental institutions which delayed proper, affordable treatment for a disease primarily effecting marginalised communities. The film mostly ignores the milieu of the movement that galvanised thousands of gay activists, with an occasional reference here or there, like Woodroof’s vulgar reference to ACT UP: “the faggots up in New York City.” The face of ’80s American homosexuality is represented by a singular character, a transgender person named Rayon (Jared Leto), whom Woodroof begrudgingly befriends in hospital. They later become business partners, as Rayon’s stereotypically sassy sociability proves invaluable in moving the semi-illegal product in the subculture Woodroof knows nothing about.

It’s perhaps unfair to suggest that Dallas Buyers Club presents Woodroof as a heterosexual white male saviour for HIV-infected homosexuals, though occasionally it does leave that impression, if inadvertently — for example, the paternal approach he cultivates with Rayon as he tries to keep him/her on track from abusing drugs, and a pivotal scene in which he physically forces a homophobic friend to shake Rayon’s hand. It’s hard not to see through film’s emotional pandering, yet ultimately it’s most successful when demonstrating Woodroof’s self-righteous momentum and tenacity in fighting the system.

Even these scenes, however, leave something to be desired, namely, opponents who do more than dismiss Woodroof or alternative medicine. Like Rayon, Dr Eve Saks (Jennifer Garner) is a perfunctory representative of an entire stratum of society; in her case, the compassionate medical professionals stuck between a rock and a hard place in doing the best for their patients.

Dallas Buyers Club proves at least intermittently that Vallée is capable of hinting at the subtle dualities within Woodroof’s complex character and his life-changing journey, but more often than not it impulsively switches gear into prestige-picture mode, goading the audience into a highly codified and instructed path of emotions.

Jean-Marc Vallée follows up his sensitive portrayal of homosexuality from 2005, C.R.A.Z.Y.

A calculated prestige picture that never bothers to ask broader questions about the AIDS epidemic.