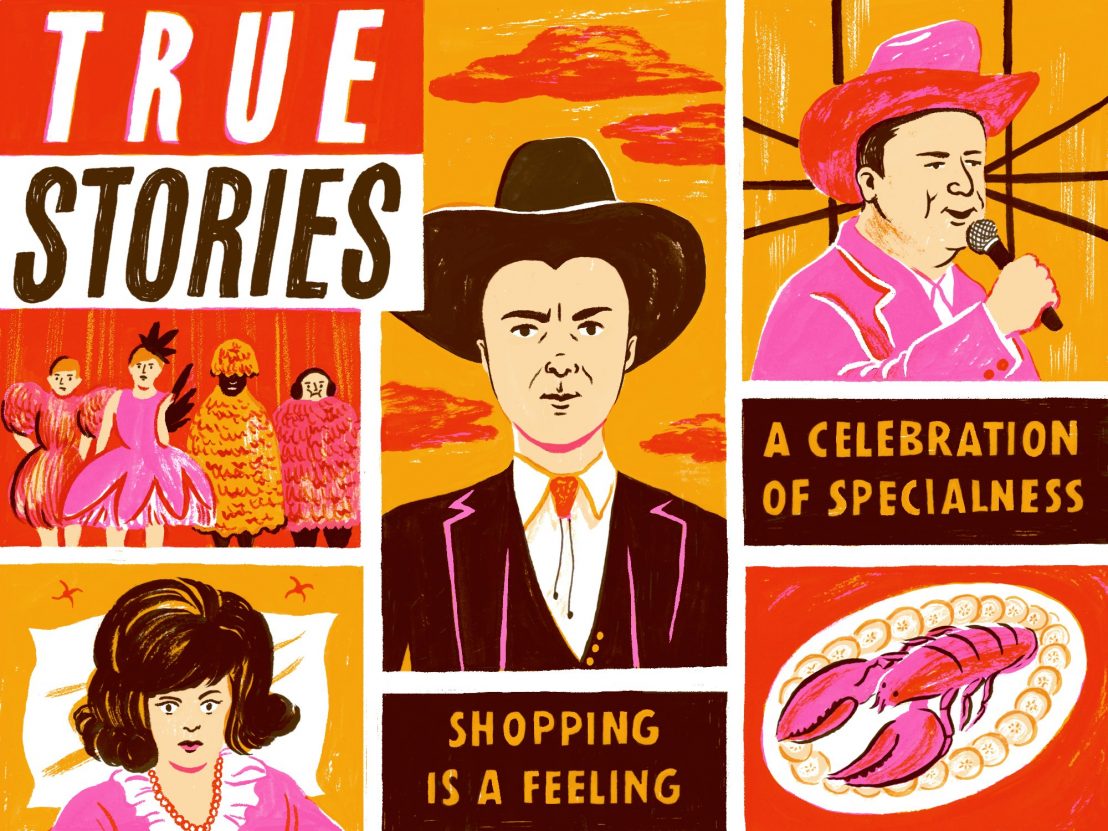 Depending on your perspective, David Byrne’s surrealist 1986 musical, True Stories, is either a satirical film that takes great pride in mocking America’s middle classes or an innocent celebration of everything that makes living in the suburbs so bizarre and unique.

Set in the fictional Texan town of Virgil, the film sees the Talking Heads frontman observe the locals as they prepare to host a concert marking Virgil’s 150th anniversary. Rocking a cowboy hat, Byrne’s unnamed character watches on intently as each of the residents gets fat, binges on bad television, and falls in love with one another.

True Stories bottles the mundanity of white, small town America, with one character (Miss Rollings, hilariously played by Swoosie Kurtz) never leaving her bed, seemingly content with the television acting as her entire universe. There’s also a preacher (John Ingle) who likes to sprout laughable conspiracy theories, a local loser (John Goodman) who is unlucky in love, and a married couple (Annie McEnroe and Spalding Gray) who only communicate to one another through other people. Byrne, meanwhile, finds magic in the ordinary, transforming everyday family dinners and trips to the mall into quirky musical numbers tailored to the MTV generation.

The film’s soundtrack made a big impression on composer Heather McIntosh, a onetime bass player in Gnarls Barkley who has scored the likes 2013’s Compliance and 2015’s Z for Zachariah, both of which are filled with grandiose strings and quirky synths. “My uncle gave me the film as a birthday present,” McIntosh recalls, “the music broke my brain, but in a good way! It’s so charming and I love how wide-eyed all the songs are. They’re all very patriotic and bottle this idea of Americans happily skipping a long to the beat of consumerism and not really questioning anything.”

McIntosh was particularly fascinated by one iconic family meal sequence, where the dinner table starts spawning psychedelic lights and a plate of lobster giddily spins around. It made her realise, even as a child, that the most boring interaction in a film can be transformed into something magical simply through the right choice of song.

“That scene is just so ahead of its time,” she says. “There’s a spinning lobster and brightly coloured peppers. All the different food is like a different cog in the wheel. When the small girl says, ‘Where is the music coming from?’ and David Byrne’s character says, ‘Is she okay?’ – it’s just such a twisted sense of humour. He turns a mundane situation into a music video and shows you can find fantasy in normality. The string arrangement that plays over the scene really takes you to another world. It inspired me to become a musician as I wanted to create that same feeling.”

Another musical number, ‘People Like Us’, sees John Goodman beautifully channelling the idea that human beings work best when they’re around other people. Singing over a quintessentially 1980s pop production, he croons: “We don’t want freedom / We don’t want justice / We just want someone to love.”

“That song shows that even in this oddball pocket of the world, cut these people to their core and they’re just like the rest of us: they want to be loved,” McIntosh adds. “It’s such a goofy song, so charming in its delivery and kind of captures the weirdness of Texas, which is quite a lonely place to drive through. I’ve heard people say Byrne is poking fun at small town folk, but I think he’s revelling in their eccentricities. The music really finds the joy in these oddball characters, who might be weird, but are ultimately sincere and just trying to find their place in the world.”

After Goodman sings the song, the reclusive Miss Rollings character calls him backstage and asks him to be her husband. The film then cuts to their wedding ceremony, which is conducted right from Miss Rollings’ bed. The pair choose to spend their honeymoon in bed together watching television. This could be read as a bleak piece of social commentary from Byrne, who appears to suggest that Americans prefer alternate reality to actually going out and living their lives.

Yet McIntosh, whose most recent film work includes the Jesse Eisenberg black comedy The Art of Self-Defense, doesn’t see it that way. “It’s absolutely a happy ending; everybody wins! Miss Rollings gets to watch TV and John Goodman gets a wife. There is something oddly joyous about it. Scenes like that helped me get through my own mundane life in the suburbs and taught me that I could still be happy even in the most ordinary situations.”

True Stories ultimately made McIntosh realise that being uncool could be the coolest thing in the world. In Byrne she found a kindred spirit, someone whose music made being weird seem like a lot of fun. “True Stories shows that if just use your imagination, sitting in bed or having a family dinner can be the most exciting thing in the world. The film changed my life, and I hope more people can be won over by its charms. The music is about celebrating the small details in life and realising how wondrous they can be.”