Why I love Kathy Bates’ performance in Misery

In her breakthrough lead role, Bates plays a reclusive nurse who takes her fandom to horrifying extremes. 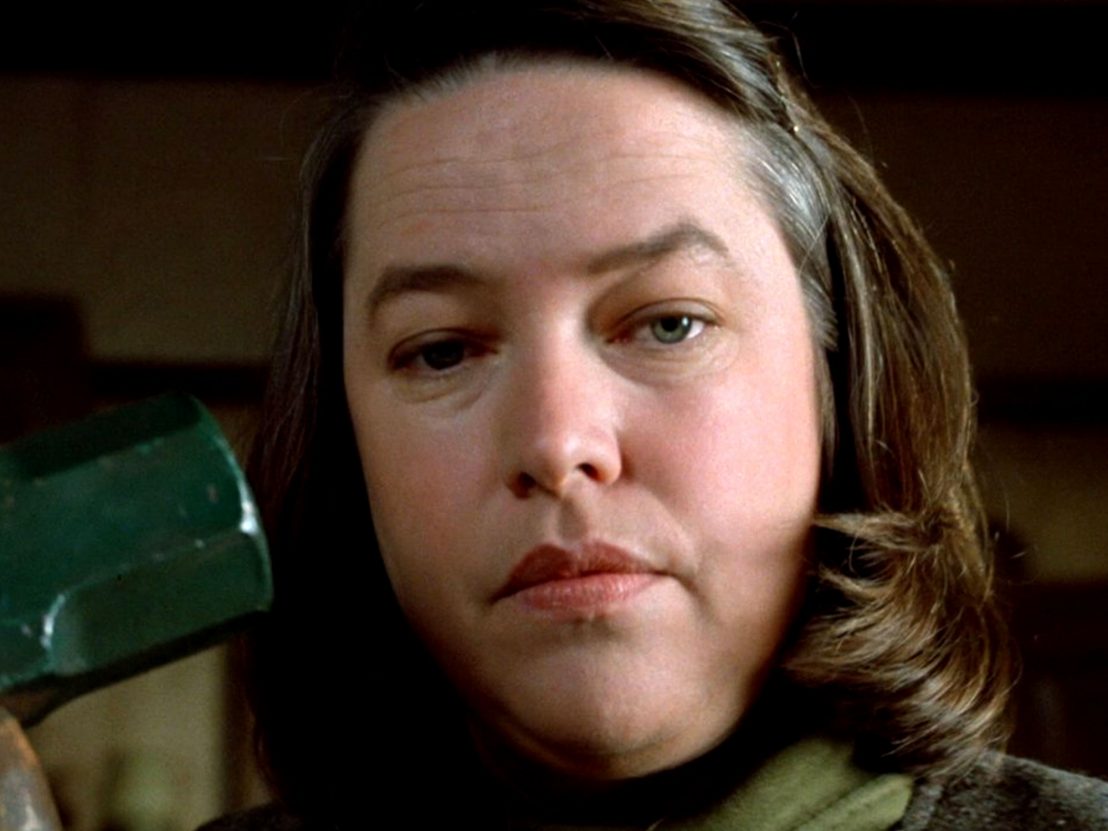 Content in her spinsterhood, a delusional romanticist and the number one fan of romance novelist Paul Sheldon, Kathy Bates invites the audience to underestimate her as Annie Wilkes in Rob Reiner’s 1990 chamber thriller, Misery. In her remote Colorado cabin, she nurtures her favourite author, Paul Sheldon (played by James Caan), back to health after rescuing him in a blizzard. Over the course of the film, she turns from warm to volatile and back again until finally reaching breaking point.

Adapted from Stephen King’s 1987 novel of the same name, Misery serves as an allegory for the author’s drug use, making Annie his most personal ghoul. For this reason, King was protective of his intellectual property and unwilling to sell the film rights to anyone. But Reiner, who previously brought Stand by Me (based on King’s novella ‘The Body’) to the screen, was an exception. (Reiner wasn’t the only person King would be keen to work with again; following Misery he wrote ‘Dolores Claiborne’ in 1992 with Bates’ in mind.)

In her quaint guest bedroom, Annie tends to her bedridden hero like an injured bird, his purple legs strapped in makeshift splints. In her dulcet voice she tells him while spoon-feeding him that the roads are blocked and the phone lines are down. She appears benign and unassuming at first, albeit a source of annoyance for her patient.

Her femininity is seen as pathetic; she worships Paul’s trashy ‘Misery’ book series, is offended by profanity, and watches TV dating shows. Annie is more akin to Bette Davis’ mad child-adult in psycho-biddy classic What Ever Happened to Baby Jane? than the femme fatales of erotic thrillers past, or those embraced by feminists like Carrie – Brian De Palma’s 1976 horror about male fear of the female body, has become a symbol of female rage. In fact, what Bates had to work with was a blank slate. She was 41 at the time of filming; women of her age were usually invisible on screen, rarely the lead role, and she often plays into this.

“You’ll never know the fear of losing someone like you if you’re someone like me,” she tells Paul as he shows signs of recovery. Her eyes heavy and her face drained of colour, she draws a gun from her pocket. In this moment, she’s most difficult to read, and shows a rare glimpse of vulnerability.

Most of the film is carried by Bates and Caan, with Paul largely reacting to and appeasing Annie’s behaviour. When she reads the final instalment of his series, in which her beloved Misery dies, she admits that he is her prisoner, not patient, and forces him to write one more novel: Misery’s Return.

With the help of Reiner’s camerawork, Bates’ performance is suffocating. He shoots her from below, closing in on her face in moments of aggravation which contorts as her voice turns from soothing to deranged. She delivers her dialogue like a monologue before returning to her plain, baby-talk inflected speech (“Cock-a-doodie,” “Oogie,” “Oh, pooh,” “Did I do good?”).

Annie’s discovery of the hair clip Paul has been using to escape from his room is the catalyst for her most reckless meltdown. In the infamous ‘hobbling scene’, she ties Paul down, places a piece of wood between his ankles, and breaks them both with a mallet. She rationalises her actions to him and smiles in her pseudo-maternal manner. A facade further diminished by Paul’s earlier discovery: newspaper cuttings of Annie on trial for murdering numerous infants in the infirmary. ‘Misery’ quotes used by Annie throughout the case brings the town’s sheriff to the cabin.

There are sparks of humour in Bates’ performance, too, as she waltzes around after reading of Misery’s resurrection and announces she will play her Liberace records. Or when she wildly snorts at her pig – named after the book’s heroine. Yet Bates’ Annie doesn’t stray into camp territory despite the overtly suspenseful music that soundtracks much of her rage. She plays the part with just the right amount of restraint, enough so that you always know she is a threat, while keeping you apprehensive about her next move.