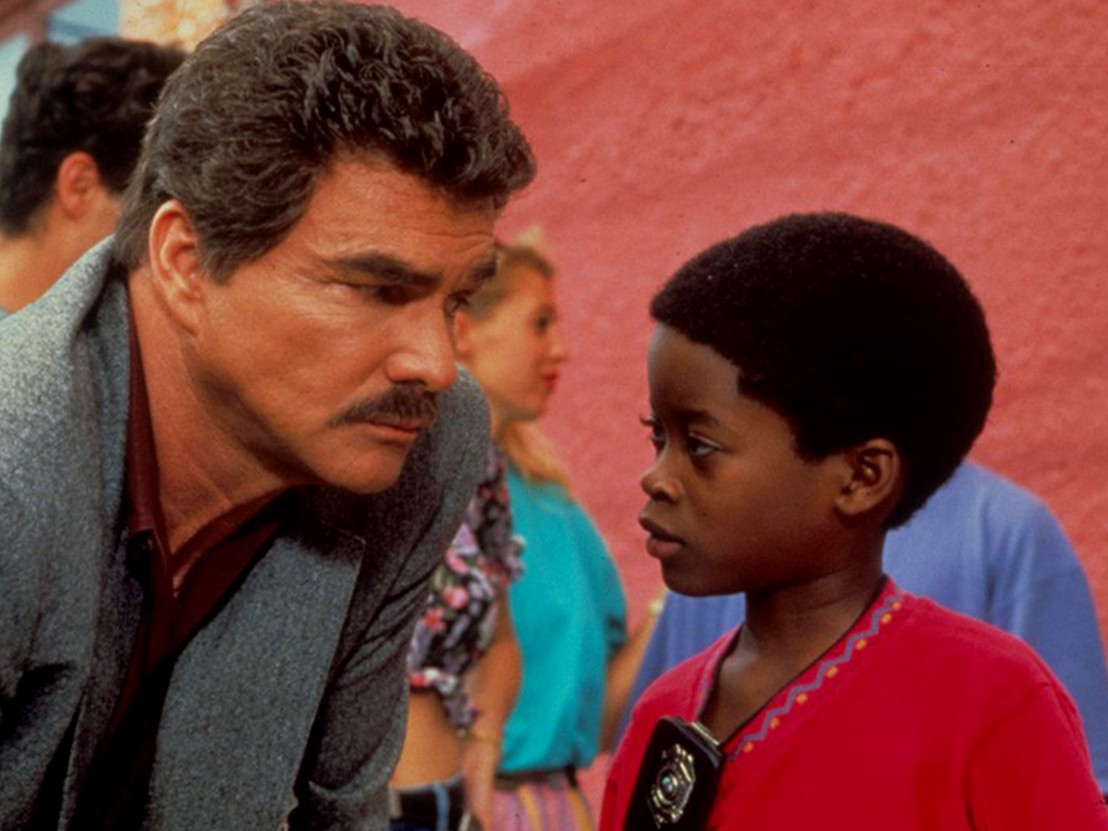 It began, as so many things seem to these days, on Twitter. Late one evening, I noticed that Little White Lies editor David Jenkins had tweeted a somewhat mischievous contribution to the Twitter trend #oneperfectshot: a still from 1993’s oddball buddy cop movie Cop and a Half, which starred a pre-Specsavers Burt Reynolds as the eponymous, permanently-enraged officer who ends up saddled with a plucky, pre-pubescent apprentice (Norman D Golden II).

Readers of a certain age will remember Cop and a Half as belonging to that peculiar subset of high-concept, soft-centred, family-friendly films that would screen, without fail, on Bank Holiday afternoon terrestrial TV. See: Ghost Dad, K-9, Three Fugitives, Vice Versa, Three Men and a Little Lady, and so on…

I have pleasant memories of watching Cop and a Half as a child. I don’t remember it being a classic, but it was sweet, had least one fairly exciting chase sequence, and was good for a chuckle. So when I gave it a cursory search on a couple of collative film critic websites, I was alarmed to discover the opprobrium with which it was treated: “A hemorrhoid-and-a-half to whoever sits through this abjectly painful comedy, which does for Burt Reynolds’ career what Stop! Or My Mom Will Shoot did for Sylvester Stallone’s,” said Leonard Maltin.

I’ll stand my assessment of the film (and not just for nostalgia’s sake). And there’s at least one other person keeping the film’s legacy alive. When Jenkins’ tweet went out, it was soon spotted by the eagle-eyed Golden II (aka ‘a Half’), who identified himself and asked, quite reasonably, if he might be interviewed. Up to this point I’d been a mere observer, listlessly nursing a cup of cocoa from the comfort of my bed. I could have put the cup down, rolled over, and gone to sleep. But I knew it was time for action.

A couple of private messages later, and Golden II and I were corresponding like there was no tomorrow. Here are some highlights from our online pow-wow.

Golden II: I was inspired by watching The Cosby Show with my family. I would see the kids on the show and thought it looked like they were having so much fun. I expressed an interest in acting, and around the same time one of my parents’ friends suggested that they enrol me in a commercial workshop, which they did. The workshop lasted for six weeks and at the last class there were agents there scouting and three of them wanted to sign me. So as they say, the rest was history!

What are your major memories of making Cop and a Half?

The preparation — learning things about law enforcement and how to skateboard, etc… I remember the overall shoot, but interacting with fans was most memorable. Burt Reynolds gets a bad rap sometimes in the media but he’s such a wonderful man and working with him was a great experience. I enjoyed every minute of it… even the very humid Florida weather.

He was an incredible guy, very focused. I presume because he wanted to make a good impression on one of his first directorial projects, but he was also great to work with.

If you watch the film today, Burt Reynolds seems legitimately pissed off at times – like he’s not even acting. What was he like to work with? Did you keep in touch?

Lol – Yes those scenes were pretty authentic. There were often times when he would disagree with a direction that Henry was giving, but he always kept his cool with me. I learned a lot from him on and off screen. I remember how gracious he was with his fans and him telling me that no matter what, remain true to who you are and treat your fans right because at the end of the day, if there are no more roles coming in, those are the ones who will remember you. I know it might sound like hefty advice to give to a kid but he’d always say that I wasn’t your average kid. I haven’t been in touch with Burt for a while but my goal is to reconnect with him soon. I heard his health was failing and I’d like to reach out to him and actually thank him for being the driving force behind my having such an incredible opportunity and making my dreams come true.

One of your Cop and a Half co-stars was the great Ruby Dee, who sadly passed away recently. What was it like working with her?

The passing of Ruby Dee was like losing my real-life grandma. When I heard the news of her death I was brought to tears. I remember her jokes and laughter, she had such a warm and nurturing spirit with me that, during filming, her role of grandma transcended the screen. During downtimes, she would come and hang out in my dressing room and practice braiding my two sisters’ hair while we were on set and tell stories of how it was when she was growing up. She also made me aware of my newly acquired ‘celebrity’ status and, like Burt, reminded me to stay grounded in the artistry and not get lost in being ‘famous’.

Generally, the critics weren’t too keen on the film. Aside from Roger Ebert [“I can say that Norman D Golden II does a splendid job of playing the pint-sized cop”], the reviews were pretty negative. Were you hurt by any of the more personal criticism?

Aww, it’s okay man. Critics can be cruel but that’s what they get paid to do! I honestly wasn’t really exposed to much of what the critics were saying mostly because my parents did not want that to affect my creativity. But being the type of person I am, I never got offended by those “more personal” remarks. I actually thought the more personal jabs stemmed from sheer cruelty and were not worthy of my attention.

You didn’t act for too long after Cop and a Half. Were you put off by the experience? Or was it that other interests took over?

I absolutely loved the experience but there just wasn’t a lot of decent work that was being created/offered/available for my type. After Cop and a Half, I was signed with one of the major talent agencies which was awesome, but many times they were unsuccessful in pitching my talents because of the aforementioned. Of course this is not the sole reason for me not doing a lot of projects thereafter, however, it played a major part. Diversity, or lack thereof, in the industry has recently been a developing discussion and many actors and actresses, other industry types and media consumers have been joining the discourse. Last year was a great year for expansion of more diverse films (such as 12 Years a Slave) and role offerings, so I hope that Hollywood can expand on this trend so many more talented individuals of all types – like myself – will have an opportunity to creatively express. I also had other interests such as music that I took an opportunity to develop.

You’ve also performed as a rapper called Enormus. Do you still rap? Who were/are your inspirations?

Enormus is my other self lol. I love music (all types) and will forever express in that area, be it professionally or not. I am a rapper although jazz (Miles Davis, Thelonious Monk, Charlie Parker, etc…) has been a great inspiration music-wise. I also come from a very musical family with singers, musicians etc. As far as hip hop artists goes, I respect a lot of old school artists and those that usually don’t get their props but are awesomely talented: Little Brother, Big Krit, A Tribe Called Quest. Here is aperformance that I did with a musical mentor of mine, Mr Beanie Maupin, who composed on Miles Davis’ ‘Bitches Brew’.

According to your Twitter bio you’re producing and writing for TV now. What have you been up to in that field?

I have been writing screenplays and TV scripts (along with music lyrics) since I was about 14 years old. Growing up having read so many, you just kinda get the gist of it, ya know? I have collaborated on a few projects that didn’t fly unfortunately but those experiences allowed me to polish my chops. I have three television pilots of my own completed and a web series (loosely based on some of my experiences being a “former child actor”) that I am actually planning to produce soon.

Anything else you want to add?

I just want to thank you for extending the opportunity for me to interview, I want to give a special shout out and thanks to all of my fans that have been there from day one till now and say keep an eye out for new projects that I may have out such as the webseries mentioned before. I extend an invitation for those reading to follow me on twitter: @NormanGoldenll and add me on Facebook: Norman D. Golden II for updates on new projects and developments and just for conversation.

Norman’s album ‘Seeds vol. 1 Pick of the Litter’ is available via iTunes.