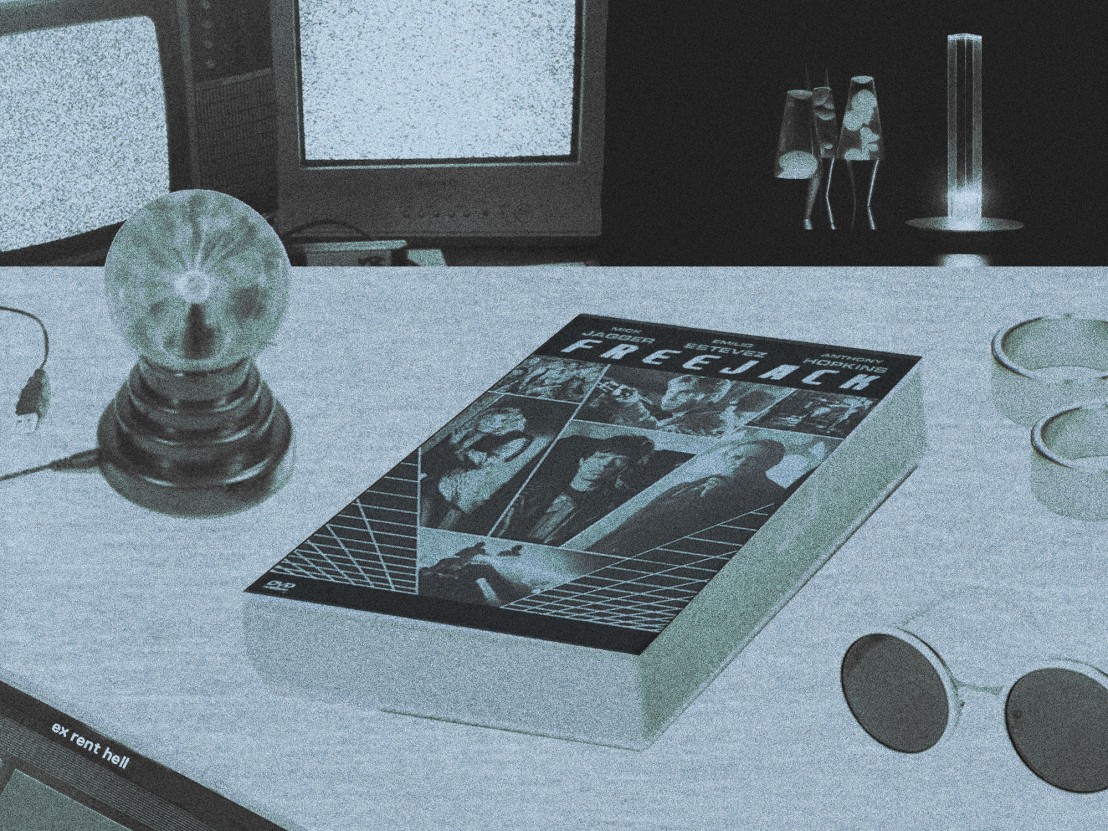 Tagline: Time flies. But to survive the year 2009, he’ll need to move a lot faster.

Trailers: The Flaming Globes of Sigmund, Interim Kaiser, A Fistful of Zen

Cherrypick: “Cos right now we over a abyss like the coyote in them Roadrunner cartoons. Ever seen that sick fuck? He all twisted up b’yond repair.”

There is a golden moment in the opening credits of rose-tinted US sitcom throwback Happy Days in which pipsqueak local hardman Arthur Fonzarelli takes time out from bullying Milwaukee’s gooniest High Schoolers to pop into the bathroom of Al’s Diner and freshen up. He is just about to run a comb through his proud Italian pompadour when his reflection reveals an inarguable truth: there is simply no way to improve upon his current state of exquisitely groomed physical perfection. He’s a snowflake. He’s a rainbow. He’s a tiny leather unicorn. Heyyy!

The Fonz’ promethean follicular epiphany (PFE) comes to mind upon reading amazon.com’s bald and withering outline of 1992 Jagger/Estevez sci-fi curiosity, Freejack. The hilarious one-line description boils the film down to its molecular building blocks thusly: “Bounty hunters from the future transport a doomed race-car driver to 2009 New York, where his mind will be replaced with that of a dead billionaire.” Sublime in its ridicule, it rivals a TV listing this column once saw which genuinely trumpeted a screening of Avatar with the line: “A paraplegic goes to the moon.”

A mix of Total Recall in reverse and Blade Runner on a sunny day, it is no surprise to learn that Freejack was adapted from stone-hatchet mad post-hippy literary psychonaut Philip K Dick’s short story ‘Quiet, the Bassoons of Tomorrow’. A Cartesian whirl of doubt, memory and zero-G future-sex first published in pulp staple Astoundingly Unlikely Tales, the original contained no bounty hunters, no motorsports and no strutting Cockney iguanas. No matter.

Flash forward to the ’90s. It’s Hammer time! We got product placement, we got Quantel Paintbox computer graphics, we got Emilio hot from Young Guns, we got Jagger hot from [citation needed], we got heavy-comers Jesus Jones on the soundtrack. The rest can surely take care of itself. And mostly it does. It’s about as exhilarating as experiencing continental shift on a real-time basis, but boxes are wearily ticked.

Estevez boasts bog-brush hair, a seamless, expressionless face, shiny button eyes, and could easily pass for an anthropoid Muppet. He scurries from one derivative sci-fi vignette to another bellowing “What year is this? Who’s the President?!?” Mick, resplendent in an outsized black fighter pilot’s helmet (the helmet is black, not the fighter pilot – there is no fighter pilot) that lends him the aspect an evil, wizened ant, is in mildly hot pursuit, with a performance that flits between camp, avuncular, joshing and white-eyed glossolalia. At one point he eats a Fabergé egg for no reason at all.

And yet His Satanic Majesty’s stunt casting is far from the only notable feature of Freejack. What about that dead billionaire? Like another epic sci-fi parable about man’s overreaching grasp, Freejack is two hours of ponderous vinegar strokes in search of a splashy money shot. But whereas the finale of 2001: A Space Odyssey was content to kaleidoscope beyond the infinite in search of its pitch black pearl, Freejack traverses far dimmer terrain: the flaking interior of Anthony ‘Hic!’ Hopkins’ dreamatorium.

Why is he dressed as Shakespeare? Are we in a cathedral? Oops – he’s behind you! “Have a cigar.” Now we’re on top of a skyscraper. In an igloo. So much stock footage… An eagle screams. Hoppo walks out of a mirror dressed in riding pinks and a sombrero. Jurassic Park is one short year away yet look at the state of this! Now there’s lightning. Coming out of his mouth. The dead billionaire’s mouth is alive with lightning. The doomed race-car driver has morphed into a Muppet. The bounty hunters dine on Dead Sea Scrolls while The Fonz screams in vain. We’re waiting for a train and the water in our head is not dissimilar from the landscape and a tortoise lays on its back, its belly baking in the hot sun. But we’re not helping. Why aren’t we helping, Amazon? Why?

This article was originally published in LWLies 59: the Tomorrowland issue.