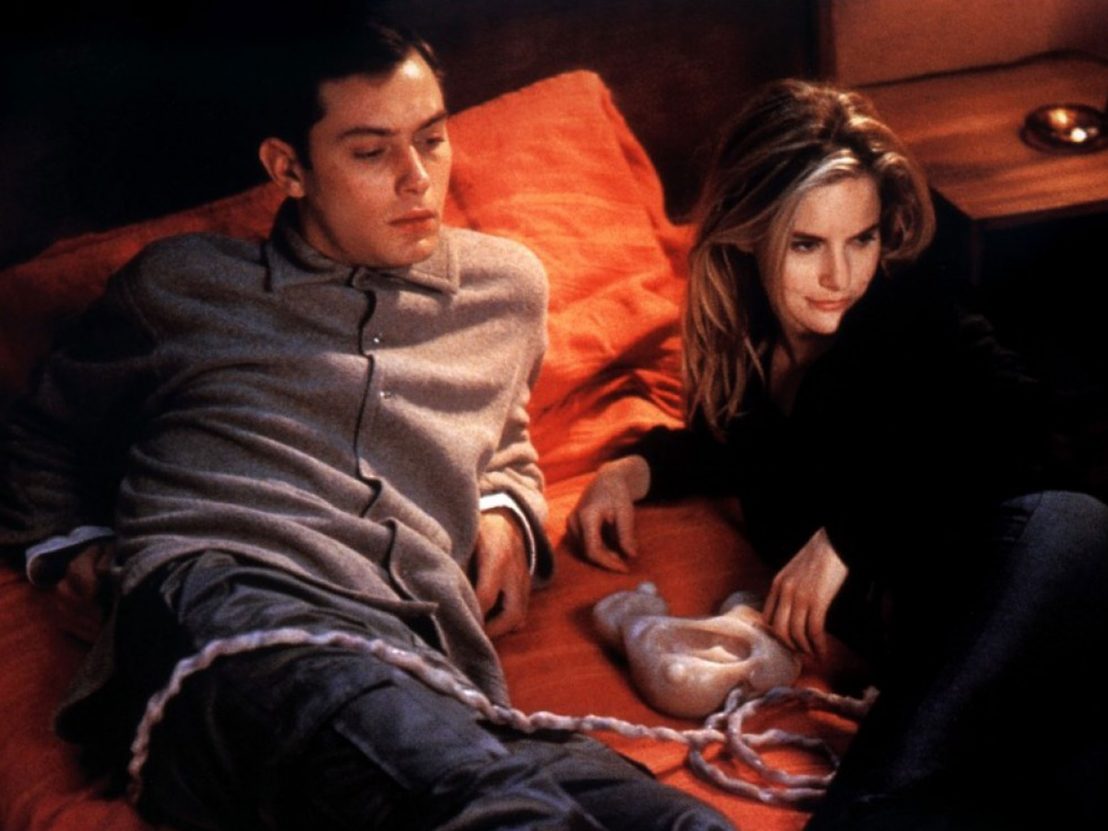 “I don’t like it here. I don’t know what’s going on, we’re both stumbling around together in this unformed world whose rules and objectives are largely unknown, seemingly indecipherable or even possibly non-existent. Always on the verge of being killed by forces that we don’t understand.”

‘PR nerd’ Ted Pikul (Jude Law) is a newcomer to virtual-reality gaming, and while his responsibility to keep superstar game designer Allegra Geller (Jennifer Jason Leigh) safe from a shadowy cadre of anti-game zealots requires him to plug in and play for his first time, diving deep into her constructed reality, his response to the all-encompassing experience is aways tempered with a measure of resistance. “I’m feeling a little disconnected from my real life. Kinda losing touch with the texture of it, do you know what I mean? I mean, I actually think there’s an element of psychosis here,” Ted tells Allegra at another time, before actually pausing the game for a breather. The problem is that there can be no real escape.

For eXistenZ – both Allegra’s latest beta release and David Cronenberg’s dizzying B-movie – makes the different textures of game, film and life increasingly difficult to tease apart, as Ted finds himself all at once seated in an audience, performing on stage, working through stages and levels to no obvious purpose, losing all sense of self (and all grip on autonomy), while also playing God. As Ted’s different worlds begin cross-infecting each other, his eXistenZial crisis matches the disorientation experienced by anyone engaged in fiction – or indeed living life.

Cross-infection, and the fear of viral contamination, are key to a film made in 1999, when anxieties over Y2K had everyone panicking about the possible dissolution of their online existences, and the profound disruption that this might cause to their real lives. Here, in keeping with Cronenberg’s usual obsession with what in Videodrome he termed ‘the new flesh’, the prototype consoles used by characters to port into Allegra’s virtual world are figured as biological ‘metaflesh’ game pods – organic, eroticised extensions of the body that have their own feelings and susceptibilities to damage and disease.

With nipples instead of buttons, these grotesque objects are stroked and palpated into action, and connected to players via an umbilicus, as though gaming were a procreative act. It is certainly – and perversely – sexualised. In order for Ted to get a gaming port, he needs to overcome his ‘fear of having [his] body penetrated’, and to allow illicit installer Gas (Willem Dafoe) quite literally to rip him a new hole – a hole which later will be rubbed with lube to make it more receptive to the insertion of ‘umby cords’ and other foreign objects. By the end, Ted is no longer a gaming virgin.

As the now intimately connected Allegra and Ted explore their strange new environments together – paranoid places full of conspiracy, double-crossing and violent rebellion – Cronenberg may emphasise the immersive, corporeal aspects of gaming, but he is no less interested in their corporate nature. His gaming worlds are reflexively populated by developers working in the gaming industry, and if their products – seen by some as a punishable sacrilege against reality, and by others as enviable playthings, or even articles of worship – are advertised to the viewer, so too are the means of their production.

For as development costs and profit margins are cited, and brand names and corporate slogans get bandied about with mantra-like regularity, we also glimpse the unethical exploitation of natural resources (in this case mutant reptiles and amphibians) to produce the game pods, and the insalubrious working conditions in the factories where they are put together – all a reminder that these games have more than one kind of occult attachment to the real world. 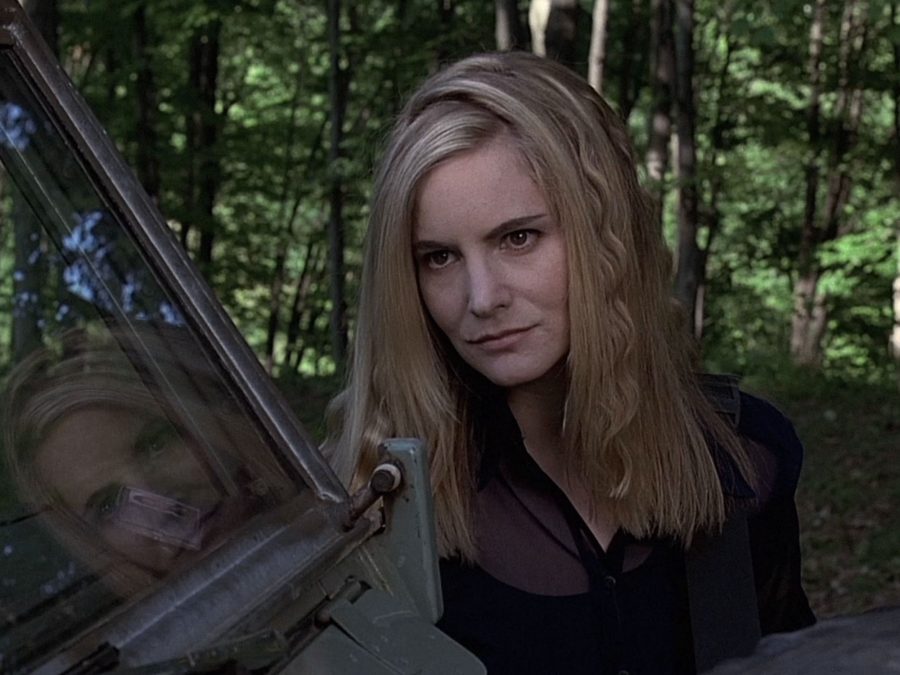 At the same time, the gaming worlds offer a metacinematic space wherein, even as the story unfolds, Allegra and others offer ongoing commentary on the quality of the dialogue, accents, etc. exhibited by the various ‘characters’ that they encounter or inhabit along the way. “Don’t you ever go to the movies?” Allegra asks at one point, incredulous that Gas cannot see the predictable trajectory of his narrative path. Meanwhile, one of the strongest hints that the ‘real world’ with which eXistenZ opens may already be part of the game is the obvious rear projection of backgrounds outside the car in which Ted helps Allegra flee her would-be assassins.

Here the artifices of cinema and the virtual reality of games are indivisible, as Cronenberg takes us on a “wild ride” through both. As the game taps into his brain and nervous system, replacing physical with imaginary experience while still retaining vestigial, mutated echoes of the real, newbie Ted serves as both cicerone and mirror to the viewer. After all, both are negotiating their suspension of disbelief as they struggle to find their conflicted place in an amazing, alienating world that they simultaneously welcome as their hospitable vacation spot and reject like a cancer.

Ultimately, though, eXistenz is as concerned with the nature of real life as with the unreal worlds of movies or games. Ted’s confusion, his occasional delusions of grandeur, his inexplicable and irresistible urges, his paradoxical desires both to stop and to continue (or, as Allegra puts it, “to see what’s so special about the special”), his not always happy surrender of control to a system or higher authority that he never quite comprehends – these are recognisable parts of the human condition, as Cronenberg captures us all as needy, frightened, horny, compulsive beings in search of escapist, transcendent experience that always lies just beyond our grasp. This quest is aptly framed in quasi-theological terms. In the film’s opening sequence, the game eXistenZ is being previewed to adoring fans in a building that is clearly a church.

When Gas recognises Allegra, he prostrates himself before her, because, he says, her “very spiritual” game ArtGod changed his life. And the bounty placed on Allegra’s head by a faction of fervently pro-realist ideologues is expressly styled a fatwa (indeed, Cronenberg got the idea for eXistenZ after interviewing Salman Rushdie in 1995, when he was under a fatwa for writing The Satanic Verses). For when gamers vie with each other and even with the maker(s) to survive and find meaning in a complex, irrational cosmos, they are confronted with issues of free will and determinism, and with an existential angst and ecstasy, that mark them as little different, mutatis mutandis, from ourselves.

eXistenZ is released on Blu-ray by 101 Films’ new Black Label on 21 May.