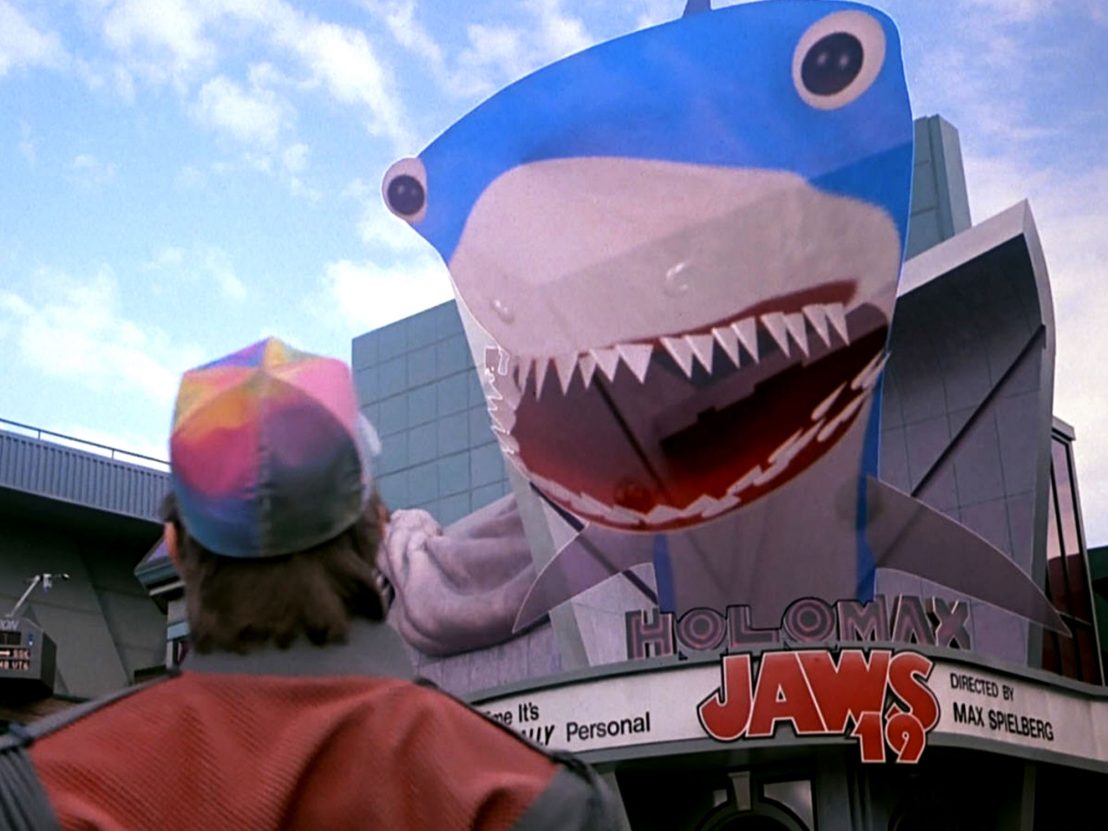 A girl’s bedroom at night. Jessica lies on her bed, a pen in her hand, writing a letter. Her TV glows, almost floating near the end of her bed, and the night sky outside tints everything in a tranquil blue sheen. Crickets croak in the undergrowth outside.

A sublime virtual reality film called Dear Angelica, by Saschka Unseld, takes the viewer on a journey through dreams, thoughts and fantasies. It’s an animated work made up of still images given life and motion by the fluidity of the art. Brushstrokes drift as if they are breathing with young Jessica, who is in the depths of slumber.

These lines are both clear stylistic elements of the design, yet fine detailing lends them a physical quality. It’s uncanny to see what is clearly an artistic representation of a bed have a three-dimensional presence. You could, if you wanted, crouch down and wrap your hands around the apparition of a bed post.

As a point of comparison, you might recall the huge shark hologram that attempts to take a bite out of Marty McFly in Back to the Future Part II’s vision of 2015. This pixellated effigy seemed fanciful at the time, but looking back, it’s one of the film’s more prophetic touches. The augmented reality advertisement for Jaws 19 hasn’t come into being, but instead we have something far more riveting and immersive. The emergent technology of Oculus Rift and its siblings offers the opportunity to take on different perspectives, explore new worlds and experience the atmosphere of a fictional space.

Dear Angelica truly comes alive when we hear the voice of Jessica (Mae Whitman) who begins to narrate her story. As she speaks her words are written in the air. Her mother, Angelica (Geena Davis), was an actress, a star of films that ranged from fantasy to science fiction to crime dramas. As if stepping into her dreams, we see Jessica accompany her in these different stories, while her narration describes how these roles defined their relationship, from rapture to calamity.

The act of stepping inside an unfolding story is an appealing one, but is it anything more than a gimmick? With regard to Dear Angelica, Tera Randall, Technology Communications Director for Oculus, thinks not: “People who come out of it have a range of emotions”, she said, “from having tears because the story really speaks to them in a personal way, to artists who are just really curious about how it was built and how it was created.”

As VR is still a relatively new medium, most new work has an experimental edge to it. Tera explained that the lead artist on Dear Angelica, Wesley Allsbrook, hand-illustrated the animation within the Oculus Rift, using a painting tool called Quill: “She could manoeuvre all the different characters and see what it’s going to look like in the final stages”. This is worked into the experience of watching the VR film, as this dynamic artform simulates the feeling of being inside the creative process.

While mostly a passive experience, there are subtle techniques employed to further engage a viewer and make them feel like a participant in the narrative. The use of sound is the only guiding hand in Dear Angelica, and what Tera refers to as a “critical piece to engagement”. With images emerging and moving around you, you decide what to focus on. You can tell the direction the narrating voice is coming from, meaning you can always return to the centre of the story after straying off-track. It was only revealed afterward the film had ended that, “in some scenes elements only start to come to life when you look at them, or when you get close to them”, meaning further viewings could reveal different aspects of Allsbrook’s design.

Yet, not every VR film is a peach. Ramiro Lopez Dau’s Oculus short Henry, an animation about a hedgehog who wishes for a friend on his birthday, creates an environment and allows the viewer to watch as a silent spectator. It’s impressive to be able to see the design of the house, but you only really watch the characters interact with the space in the same way as you would outside of VR. Similarly, Saschka Unseld’s Iron Giant-influenced Lost has you watching from the bushes as a gigantic anthropomorphic robotic hand searches for its body. After they are reunited, the giant bends down and spots you, acknowledging you as a presence within the story. Both are examples wherein the VR element is inessential.

These experiences are more akin to watching a video with control of a 360° camera than a true VR experience. The most interesting thing about witnessing a scene from a fixed point is that you can in effect take on the role of both the viewer and the director. There’s temptation to choose angles based on fluidity, comic timing and communication of information. During Eric Darnell’s comic alien short Invasion! your focus is drawn sharply to the right to follow the movement of a spaceship, not because it was going out of frame, but because of the instinct to make a directorial decision.

This kind of rudimentary interaction has much in common with video games, where you often act as naturally as possible when communicating with a non-playable character in an effort to avoid breaking the immersion of the scene. This new crop of VR shorts often feel like they exist on the boundary between film and gaming, where the definitions of both are blurred.

Something like Dear Angelica doesn’t can’t simply be equated to known channels of art, but steps into a different realm entirely. “You could take some of the things we’ve learned and used in traditional filmmaking, but most of what we’ve done in movies doesn’t apply”, Tera explains. “We’re learning something new”.

What’s exciting is that Virtual Reality filmmaking is still in its infancy, with much ground to cover before it can begin to challenge film as the dominant visual medium. This modernity that is frequently mentioned by Oculus and its competitors sometimes makes it feel more like a novelty, or a stunt that grabs your attention but is ultimately a hollow experience. Yet it is possible to use the medium to create a distinctive and profound experience that suggests great potential going forward. For storytelling and art, Dear Angelica represents the first words of a new language.