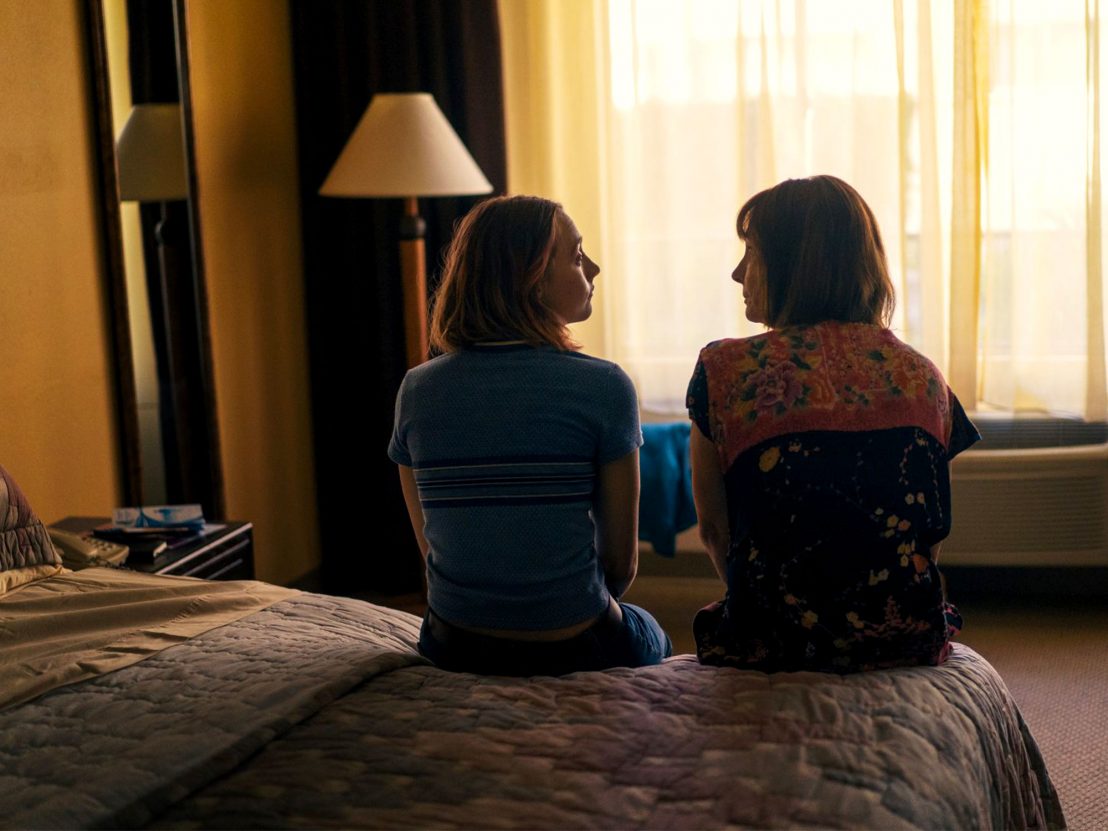 Among the many virtues of Greta Gerwig’s charming and incisive debut feature, Lady Bird, is the way it depicts mother-daughter relationships – with warmth, humour and unflinching honesty. Saoirse Ronan’s eponymous teen routinely clashes with her mother, as played by Laurie Metcalf, yet they also share moments of sincere affection. To celebrate the film’s release, we asked four of our regular female contributors to write a short letter to their own mother…

Remember the day I moved to Manchester? I can’t remember the weather, only that it was September, and by the time you’d helped me unpack my things it was getting dark outside. I felt weird when you left, impatient for my new life to start. Later, you told me that you’d cried in the car on the way home.

I’ve been thinking about all the times we’ve left each other. You, leaving me on the first day of school (me, sobbing so hard in protest that the school called you to come and collect me). Me, leaving you to go and study in the States for six months, gliding up the escalator at the airport – the image playing as a reversed version of Greta Gerwig descending an escalator to greet her parents in Frances Ha in my head. You, leaving me in London to live with people I didn’t yet know. Me, leaving you after Christmas and wishing I could stay a little longer.

In Lady Bird, Lady Bird’s mother Marion seems unbothered by her belligerent, beloved daughter’s college departure. She doesn’t even get out of the car to say goodbye. But as she laps the parking lot, her face crumples into an ugly cry. I thought of you while watching this scene, and I cried too.

I’ve always understood love as the ability to see another person as legible, but watching Lady Bird and Marion, I was reminded of how hard it can be to read your own family. We’re better at translating each other these days, but I’m still bad at leaving you.

Let me know when you’ve watched the film and if you cried too?

Today I met Dad for coffee in a little Lebanese place in Finsbury Park. We talked about how he is moving on from you while still loving you. He talked about how you didn’t go to university in the usual way. You took night classes and that’s how you got a degree. He asked if I remembered being on a family holiday in Barcelona. He said you almost didn’t have the confidence to apply for a Russian lecturer job. On that holiday the deadline was fast approaching and he was egging you on to apply. Finally you did and then… “of course, she got the job,” he said in a voice rich with pride.

That story made me feel at home.

I am relieved to know that my hesitance over my abilities is not a freak thing. It’s something you knew. I didn’t appreciate your emotional richness while you were alive. When I was making your life hell because I was locked in my own defensive spiral of adolescent unhappiness, you were juggling so much. I remember watching you applying eyeliner in the mirror of the house where dad still lives. Your face was tense and tight, with concentration but also with sadness. You looked so glum as you left me – a mess – to go to work, where you also had stress from colleagues.

I can’t bear how little patience I had for your suffering then. If anything, it infuriated me. I was the one with problems. You, an adult, were supposed to have your emotions together and tidy, but you were expansive in your sorrow like the great Russian authors whose books lined your study. I had an eating disorder, and it ate you up. You felt so guilty. You left your inbox open and I read the emails that you sent to your best friend in Moscow. Your laments about me felt like a knife twisting in my already unstable guts.

In retrospect, I’m glad that you had somebody to talk too. (Lena’s children were making her suffer so the pair of you commiserated.) The memorable stuff in our relationship was the intense clashing, but there were lighter, more tender times too, when your dry sense of humour managed to tickle me, and of course, later, once you were diagnosed with breast cancer I realised how much I stood to lose.

Now, looking back, I see how similar we are. Dad and Kieron have a stoicism while my emotions bubble up at the most unhelpful times. I fight it less and less, and accept raging bursts of feeling as our shared currency. I don’t have to miss you when you course through my blood.

The hardest part of growing up has been coming to terms with how shitty I was as a teenager, especially to you. Sure, hormones are partially to blame, but in reality… I had a pretty good idea that I was being selfish. It was always easier for me to target you as just “mom” rather than a fleshed out and complicated person trying to do their best.

It’s only recently that it really dawned on me that being an adult is not some magical state of being that affords you special knowledge and experience. That, just because you are thirty or forty, it doesn’t mean that you have your life together any more than someone who is 15. You never had to raise a teenager before me and it must have sucked, but you never made me feel like you didn’t have it completely under control. Knowing that you probably had doubts and you were probably hurt by how I acted only gives me more respect for you. If you were afraid, it didn’t show. You made raising us seem as natural as breathing, more than just something practiced but something written in your DNA.

I don’t know if I’ve ever met another person who has worked so hard at being the best the best version of themselves. I look at the way you live, and I am proud of how you push yourself to be more open, to be more healthy and to be the best you can. Most people won’t even admit to themselves that they are capable of change or being better versions of themselves and ever since I can remember, you’ve always pushed yourself to live the best possible life you could.

What I hope you know is that I love you more than anyone in this world. I think of you all the time, and if I were to look back at my life, I don’t know if there is anything you could have done differently to have been a better mother. You’ve worked hard so that other people could be happy, and I hope that in spite of hardships you are mostly happy too.

I’m sorry that I can be distant. I don’t want you to ever think I don’t want to spend time with you. It’s weird to admit, but I get a bit scared feeling that you love me so much. It’s not something I am good at dealing with in general, and as much as it hurts me that I could ever contribute to your loneliness, I’m still taking the easy way out. Even facing it down like this, I can’t even promise to be better because I’m not sure I can.

I just hope you know I love you and I will always love you,

There’s not an awful lot I remember about our relationship during the 2005-2010 period, but I think that’s largely because there’s not a lot I remember about that time full stop. I hated being a teenage girl. I didn’t go to school, I didn’t eat, I didn’t sleep. It was, all things considered, A Bad Time. We both know that I’ve gone to great lengths to forget the unique brand of hormonal malaise and indentured depression which overshadowed that period. I tried everything I could think of to shrug that burden off my back but always found it barrelling straight back down the metaphorical hill of life to crush me all over again. You used to tell me it gets easier, and I’d scream “When?!”

In time I got so used to the weight, I’d forget I was carrying it at all. I started to say “Something’s wrong with me,” forgetting that a) I was a teenage girl, so intrinsically there was stormy weather constantly on the horizon, and b) A chemical imbalance is not a character flaw. That doesn’t mean it hurts any less, of course, as it hurt when Dad walked out, as it hurt when we were broke, as it hurt when I thought I’d be stuck in the town I hated forever. I still don’t buy the idea there’s nothing wrong with me, but I’m slowly coming to terms with the notion that it’s the ‘wrong’ bits which make people interesting in the first place.

I spent many years in the curious adolescent limbo of simultaneously wanting to be both extraordinary and ordinary, caught between a push-pull of ‘stand out’ and ‘fit in’. I was frustrated that no one ‘got’ me. I think that’s why I turned to films, the natural medium of the outsider. When I think about being a teenager, I think about hurting, but I also think about other things too. Like listening to Radio 2 in the car when you drove me to psychiatric appointments. Like the numerous times you came to pick me up because I’d passed out at someone’s house party which you didn’t know I was at in the first place (sorry about that). Like going to the library on a Friday afternoon to rent a DVD for the weekend. I realised sometime later that you weren’t watching because you loved movies (you don’t) – you were watching them because you loved spending time with me.

You always believed in me when I didn’t believe in myself, and you always said “I have to, I’m your mum”, as if a sense of duty is all that compels a person to act so selflessly – and you really were selfless, because we didn’t have much, and I know everything you had you gave to me. I’m exhausting, and I’m not easy to love, and when I made it especially difficult, you never stopped trying. Even when I was being a little shit (which I suspect was most of the time).

We both know it’s not always easy, it’s never going to be easy. But thanks, at the very least, for teaching me if you keep going, eventually you might be able to laugh about things. And in the end, laughing about our own mortality, and marvelling at what tiny, insignificant specks of stardust we really are, is the best any of us can really hope for. I’m happy with that.