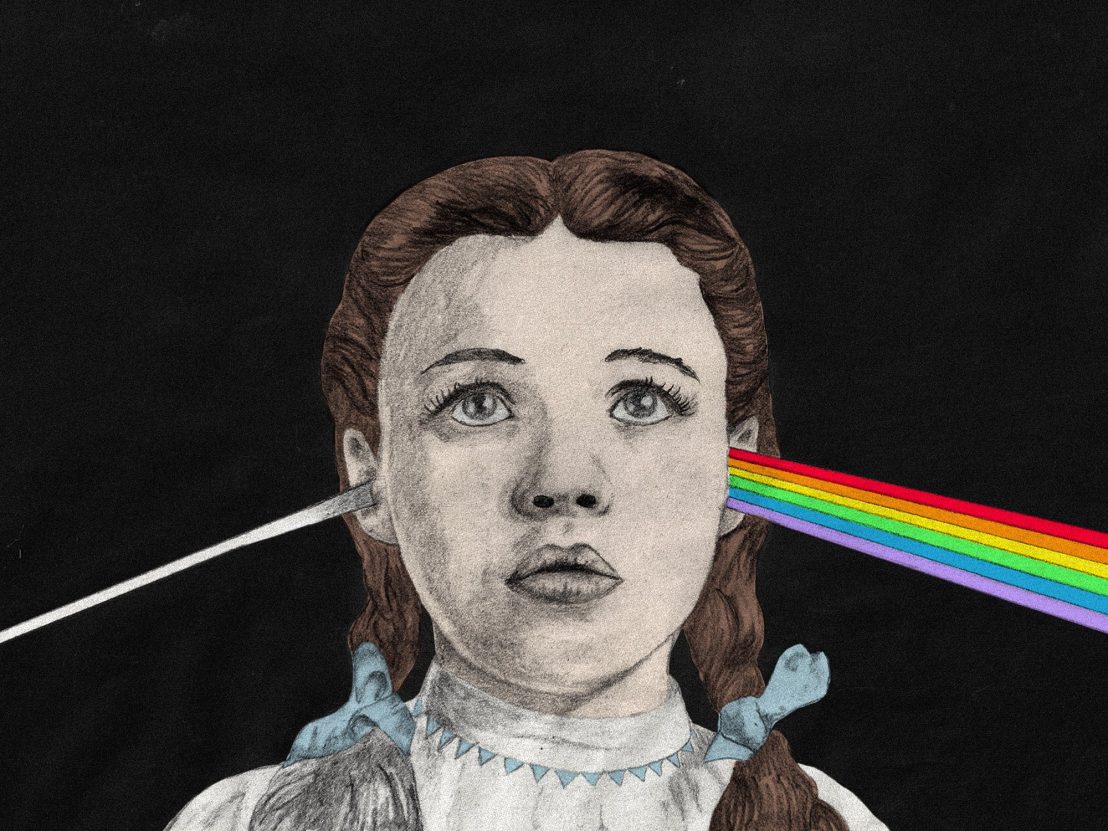 With independent cinemas everywhere still hosting screenings today, the theory that Pink Floyd’s seminal 1973 album ‘The Dark Side of the Moon’ syncs almost seamlessly with the 1939 MGM musical The Wizard of Oz is one legend that just won’t go away.

Having entered into the public consciousness a little over 20 years ago, the ‘Dark Side of the Rainbow’ phenomenon is closely linked to an early internet fan forum, alt.music.pink-floyd, and a popular 1995 article by New York Times reporter Charlie Savage, who was then writing for his local newspaper the Fort Wayne Journal Gazette.

The theory has been widely referenced and ridiculed in popular culture ever since, namely in shows such as Family Guy, How I Met Your Mother and Trailer Park Boys, which essentially paint it as the byproduct of a bunch of super fans taking too many drugs. However, having soberly watched Dark Side of the Rainbow for the first time (tracking down a Blu-ray copy which fully adheres to the rules is surprisingly easy), it’s striking just how well the theory holds up.

The first eyebrow-raising moment arrives when Dorothy (Judy Garland) balances on a fence at her family farm just as David Gilmour begins to sing the line “balanced on the biggest wave” in the song ‘Breathe’. In fact, from around four minutes into the film, the synchronicity is uncanny for a full 45 minutes, with pivotal scenes eerily appearing to coincide with the end of one track and the beginning of the next.

This is best encapsulated when the haunting piano on ‘Great Gig in the Sky’ kicks in just before a tornado hits Dorothy’s hometown, creating a powerful sense of foreboding. When Dorothy wakes up in her now floating house, Clare Torry’s powerful vocals begin to build, almost seeming like the fuel powering the Wicked Witch of the West as she menacingly encircles the tornado on her broomstick. And, rather oddly, the cash register opening of ‘Money’ starts, almost sarcastically, just as Dorothy starts to take in the wonderful Technicolor surroundings of Oz.

There also appears to be playful lyrical cues for particular characters. The line “the lunatic is on the grass” corresponds to the Scarecrow dancing on the grass, while the song ‘Brain Damage’ kicks in at the precise moment ‘If I Only Had a Brain’ starts up in the film. Later, when Dorothy checks to see if the Tin Man is as heartless as he claims, you can faintly hear the heartbeat sound that’s sampled in the album’s outro.

And while there are undoubtedly long sequences that have, at best, extremely abstract audiovisual similarities, the fact ‘Dark Side of the Rainbow’ closes with Dorothy finally awaking back on her farm as the lyric “Home, home again” rings out, starts to make you visualise David Gilmour and Roger Walters manically taking notes while watching the film at Abbey Road Studios.

Speaking in 2010, Pink Floyd drummer Nick Mason moved to debunk the theory: “It’s unthinkable that we would have felt that it was really important to work with Judy Garland, and devise an album based on that particular story. So I have to say that sadly, both the Tin Man, and the Scarecrow, and all the rest of it, had absolutely zero to do with that particular record.” In fact, audio engineer Alan Parsons has said the band were actually watching Mary Poppins during the ‘Dark Side of the Moon’ sessions.

Yet while it’s clear the band want absolutely nothing to do with the fan theory, it hasn’t stopped the speculation from mounting, with devotees convinced that even if the Floyd didn’t plan ‘Dark Side of the Rainbow’, the album and the film were somehow cosmically destined to work side-by-side.

According to cognitive psychologist and musician Daniel Levitin, there is a hint of truth to this idea: “We are a storytelling species,” he tells LWLies. “Our entire left hemisphere is a great confabulator – it makes up evidence before the facts are in. So yes, we have an inherent need to match things up.” Levitin is referring to the phenomenon know as ‘Apophenia’, the human tendency to perceive meaningful patterns within random data. And with fans already claiming that Star Wars: A Force Wakens – a film released 42 years after Pink Floyd recorded their masterpiece – syncs with ‘The Dark Side of the Moon’, it’s hard to refute his theory.

Psychology professor Pamela Heaton from Goldsmiths University believes there are parallels among such theories, which might explain why a Beatles fan hears “Paul is dead” when a song is played backwards. She explains: “One of our psychology lecturers did an experiment where everyone listened to a record backwards and it made absolutely no sense. Then he put words on the screen, that the people in the States were claiming you could here. We read the words and listened and it all matched perfectly. The reality is once the Brain has a word, it pushes to match it to the acoustic stimuli.”

But why is it that Pink Floyd’s music lends itself so well to movies? Besides Star Wars and The Wizard of Oz, there’s also the rumour that Stanley Kubrick’s 2001: A Space Odyssey perfectly matches the band’s 24-minute composition ‘Echoes’. (See for yourself.) That Kubrick was at one time considering asking the band to write the film’s soundtrack only adds an extra layer to the theory.

Heaton says the answers probably lies in the experimental nature of Pink Floyd’s music: “If you listen to a Beethoven piece, it’s very strictly structured, so it’s very obvious why it would struggle to sync with a film. By comparison, ‘The Dark Side of the Moon’ is psychedelic and experimental, it has random samples of people talking. Neither the The Wizard of Oz or the Pink Floyd album have a tight, cohesive structure and both have a dream-like quality, so it’s easier for the brain to find coherence between the two.”

Levitin has a slightly different take: “Beethoven’s VI fits Fantastia while a whole bunch of classical music fits with Bugs Bunny Cartoons.” He believes the human brain can successfully match up just about any piece of music with any film, and that the ‘Dark Side of the Rainbow’ theory is principally driven by fandom: “It might just be that Pink Floyd fans, for whatever reason, are more inclined to look for these connections.” In effect, Levitin is saying that Floyd fans are simply looking for new ways to enhance a work they are already infatuated by.

“The ‘deeper meaning’,” he concludes,“is that the brain is a giant pattern detector – it seeks to find order in chaos and to match things up even if there is no apparent relationship, as part of a grand-scale prediction system. If this goes with this, they must be related, and maybe I can predict the behaviour of x by observing the behaviour of y.”

Heaton adds: “It’s not just Pink Floyd – because of how the human brain naturally looks for coherence, I’m sure you could find dozens of other film and music combinations too.” Taking that suggestion rather literally, I decided to put on the debut album by The Doors, a record largely written while Jim Morrison was tripping balls on LA’s Venice Beach, over The Trip, an aptly psychedelic counter-culture film from 1967 about the side effects of LSD.

Very quickly, characters appear to move their knees in perfect harmony with the song ‘Soul Kitchen’, while a group of hippies share a joint and prepare to take acid as the lyric “before I slip into unconsciousness” kicks in. Here we go again…