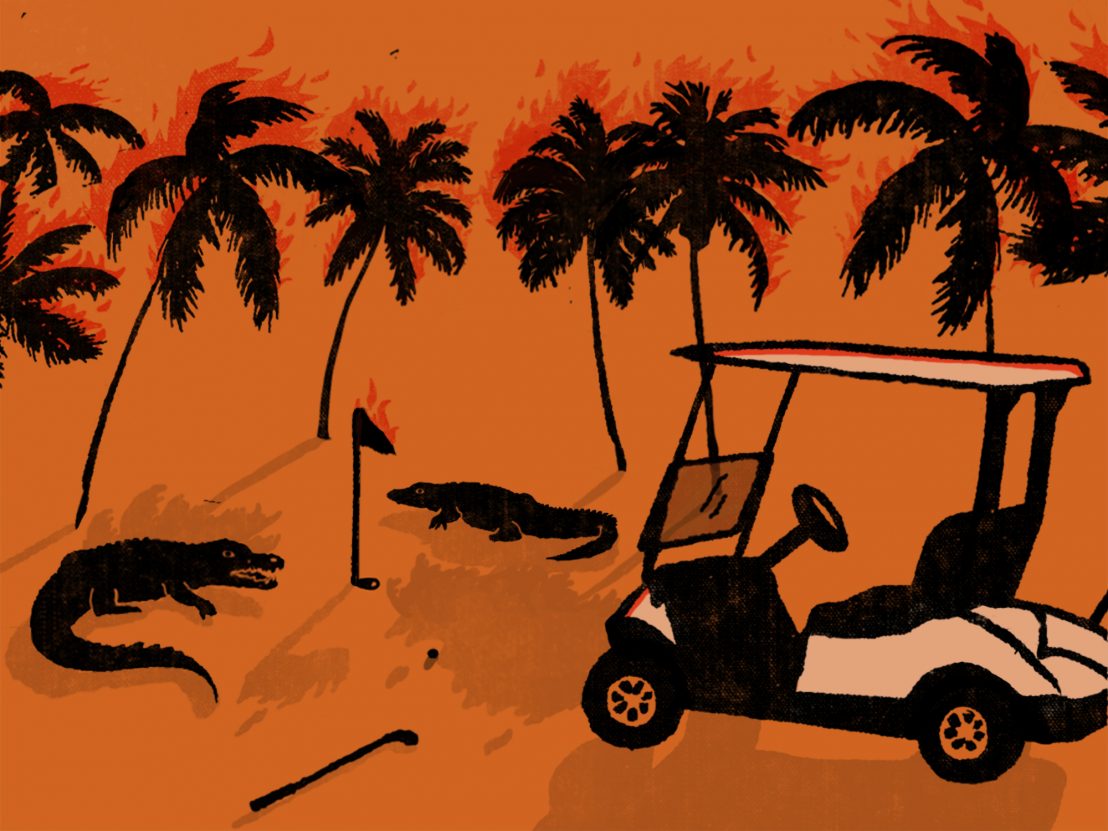 It sounds too improbable to be true: an independent film shot in Miami 20 years ago starring Dennis Hopper and featuring Sylvester Stallone and a who’s who of character actors best known for appearing in gangster films. But even if you could travel back to the dusty racks of a mom and pop video rental store, you’ll never find a copy of The Good Life. You won’t find anything written about the film online either – not even IMDb has any real info on it. After a perfect storm of production issues, The Good Life made it to completion only to be shelved for two decades and counting.

It was meant to be the next step in the careers of producer siblings Alan and Diane Mehrez. In the early ’90s, they produced successful low-budget films, including sequels to the 1988 cult classic Bloodsport. The screenplay follows three lifelong friends who are also golf aficionados. Each has issues stemming from their involvement in organised crime, including unfinished business with one powerful figure, Mr B (Dennis Hopper). Many involved with the film describe its mix of drama and comedy as a forerunner to The Sopranos with more humour – in particular, the colourful language that permeates the screenplay (the film opens with a humorous disclaimer about the frequent use of four-letter words).

Among the principal cast is Frank Stallone, Sly’s younger brother. Although a musician by trade, Frank had previously appeared in several of his brother’s films, including the first three Rocky movies. The Good Life was supposed to be his breakout role. Frank also served as a producer on the film, and those involved in the production describe it as his passion project.

The Good Life also boasted an impressive supporting cast that included Andrew Dice Clay, Peter Dobson, David Carradine, Beverly D’Angelo, Frank Vincent, Tony Sirico, Burt Young and middleweight boxing champion Vinny Pazienza (subject of the 2016 film Bleed for This). Most notably, Sylvester Stallone agreed to appear in a brief but prominent cameo as a favour to his brother. While Sly’s participation guaranteed that the film would stand out from the glut of buzzworthy indie features that were being released around the same time, it ultimately spelled big trouble for the production.

Around the mid-’90s, Miami was fast becoming a major filmmaking location, with The Bodyguard, Bad Boys and The Birdcage all shot there. The Good Life was granted permission to shoot at the famed Doral Country Club – now known as Trump National Doral Miami – though production was restricted to the Blue Monster championship golf course as the resort was undergoing maintenance elsewhere. Filming began in late October ’96 and was scheduled to run for 36 days on a $5m budget.

The timing and location were particularly convenient for Sylvester Stallone. At the time he owned an estate in Miami less than 15 miles away from the Doral Country Club (complete with a solid bronze Rocky statue overlooking the pool). Stallone is also an avid golfer, and in return for a day’s work he was reportedly given two sets of custom-made Kenneth Smith clubs. Even more tellingly, according to claims in Stallone’s later lawsuit against The Good Life, he also received an agreement that limited the use of his name and likeness in publicity materials.

Despite Miami’s emerging film industry, almost no locals were employed other than a 19-year-old aspiring filmmaker named Jason Dudek. The Miami native had gotten his start the previous year as an intern on the Jack Nicholson and Jennifer Lopez vehicle Blood and Wine. Dudek recalls, “What I bought to the table is that pretty much everyone else was flown in – there really weren’t any other Miami locals, and the fact that I was born and raised there really made me the guy who knew the shortcuts and knew my way around the town.”

Dudek was assigned to the Assistant Director department and was eventually promoted to Second AD. He says that the production ran into trouble as early as day two. “I don’t want to disparage anyone in the production or the team, because everyone was doing the best they could, but it just seemed like we had bad luck. We were plagued by problems that really shouldn’t have been there.” Communication issues led to confusion regarding call times. Then there was the small matter of the disappearance of three sets of Kenneth Smith golf clubs (worth $3000 a pop). In spite of everything, Stallone worked from 7am right through to 5pm – longer than any of the leads that day.

Yet still production issues continued. The actors were all staying at a hotel in South Beach – a fair distance from Doral and the other filming locations – and though the call sheets were expected to be slid under the doors of their rooms a rookie production assistant went home one night early on in the shoot without doing so. When the crew arrived on the set the next day, the entire principal cast was missing. It took three hours to get everyone to set. For a low-budget film, losing that much time was a disaster and diminished the cast’s confidence in the production team.

Problems with the crew led to rapid changes of personnel, but mishaps aside, everyone involved speaks highly of the footage that was captured. “Even when the operations were not up to expectations and industry standards, the content and the quality was,” recalls one crew member who would prefer to remain anonymous. “We were capturing great stuff on the camera and the dailies were great. All of the actors were nailing their performances, and it was really authentic.”

Then, on 15 November, 1996 – just 15 days into the shoot – production on The Good Life was shut down under pressure from local union groups, who had vehemently protested the film’s predominantly non-union crew. Sources estimate that about 80 per cent of the budget had already been eaten up with a little over half of the film left to shoot. With the production at an impasse, Alan Mehrez reached out to another producer, Alan Amiel, for assistance.

Amiel, an Israeli-born producer, had utilised his martial arts background in various roles in the film industry, from stunt coordinator to martial arts coordinator, actor and eventually producer, to create low-budget ninja films like 1981’s Enter the Ninja. (Amiel’s influence on the martial arts genre is such that he claims a 1993 film which he produced called Shootfighter: Fight to the Death inspired the formation of the Ultimate Fighting Championship organisation, as well as the iconic octagon fighting cage.)

Due to an ongoing dispute with local union reps, Amiel was brought in to scout new filming locations. Negotiations to shoot in nearby Broward County – where some scenes had already been shot at Diplomat Country Club – fell through. Amiel considered moving the entire production to Jamaica, but a suitable golf course could not be found. Then he turned to Ixtapa, Mexico, where the 1987 Steven Lisberger film Hot Pursuit was made.

Looking back, Amiel is particularly proud of how quickly he got The Good Life back underway. “The biggest challenge was being able to move everybody from Miami to Mexico and start shooting within a week. It was a super mess to change countries and to be up and running in one week with all the obstacles we faced.” Much of the Miami crew did not make the move to Mexico, however, including Dudek, who instead went to work as a production assistant on Wild Things. Director Barry Samson was also dismissed. Mehrez officially directed the Mexico shoot, but Amiel credits First Assistant Director Eddie Ziv for shooting a good portion of the footage. Several actors even recall being directed, at times, by Frank Stallone himself.

But the new location brought its own challenges. Much of the Mexico’s filmmaking resources were being used up by James Cameron’s Titanic. One actor refused to fly south of the border, which led to a great deal of coordination of trains, buses and private cars to bring him in from California. Cast and crew feared kidnappers and one lead actor was briefly fired by Amiel for refusing to report to the set (the issues were resolved and the actor was promptly rehired). To top it all, the ponds on the golf course in Ixtapa were infested with crocodiles, and the cast and crew were instructed to avoid going too close to the water.

Several weeks later production on The Good Life wrapped, with producers trimming the schedule by six days to bring it back within budget. An initial cut was completed by mid-’97, and a screening was put on for potential buyers. But by July the relationship between Frank Stallone and the Mehrezes had broken down. The bad blood between them allegedly intensified after a promotional reel featuring clips from Sylvester Stallone’s scene was created.

On 24 July, 1997, Stallone’s celebrity lawyer, Martin Singer, filed a $20m lawsuit (four times the film’s original budget) against the Mehrezes and their production companies. Less than a month later, Frank Stallone filed his own lawsuit against the same parties, only for the Mehrezes to countersue the brothers for a combined $50m. As if there wasn’t already enough star power involved in the suit, Christopher Darden – the prosecutor in the OJ Simpson murder trial – joined the Mehrez team in January, 1999. On 12 July, the sides came to an agreement, with Singer telling Variety, “There was an amicable settlement among the parties.” Terms of the settlement were not disclosed.

Lawsuits are par for the course for Hollywood, but unlike other troubled productions that limp to completion and eventually receive a limited theatrical run, The Good Life has never been seen by the public. It is not available anywhere, even after the deaths of two of the film’s stars – Carradine in 2009 and Hopper in 2010 – and the recent career revivals of both Sylvester Stallone and Andrew Dice Clay. Sources close to the production believe that the issues which prevented the film’s release can still be resolved, but there’s currently no timeline for when that could happen.

‘Lost’ films have long been a source of obsession among film fans, from forgotten silent era classics to Orson Welles’ numerous abandoned projects. Yet even with its high-profile cast and the unwavering perseverance of its crew, The Good Life stands as a modern example of how a film can be lost in an entirely different way. It exists as a cautionary tale of independent filmmaking, with no sign that it will one day finally be allowed to tell its own story.