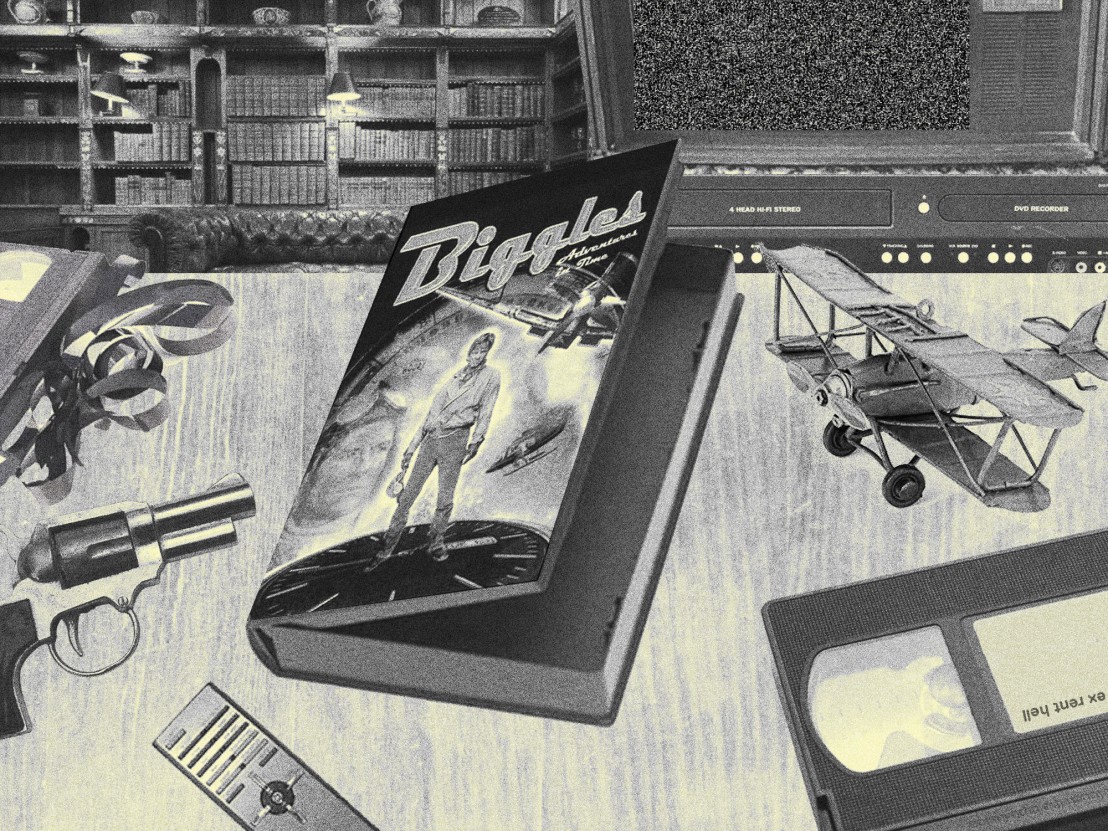 Tagline: Fast food executive Jim Ferguson stepped out of his 47th floor office to go to the bathroom… and ended up in the middle of World War One. History will be grateful forever.

Trailers: The Jewel of the Nile, Grandview USA, Trouble in Mind

Cherrypick: “A transvestite bank robber?! That one’s not even in the book!”

A sleek, silent, neon-trimmed Sikorsky attack helicopter hovers above a Dominican convent in war-torn 1917 Belgium. Meanwhile, diminutive Yes frontman Jon Anderson belts out pulsating electro-pop anthem Do You Wanna Be a Hero? over the caterwauling soundtrack. A dead-eyed American nobody with poufy hair decimates the script with flatulent mid-’80s reference-bombs… Welcome to the unfuckable nine-sided whore that is Biggles: Adventures in Time.

Yes, the Jubilee, the Royal Wedding and the Olympics – aka the Endless Flora Margarine Rah-Rah Street Party™ – has so bloated Ex-Rent Hell with patriotic fervour that we’re sidestepping our usual trawl through psychotropic LA sleaze and stewed Big Apple gutrot for a jingoistic jaunt through the mud-spattered fun-canal of the First World War. We’re in the company of boy’s own flying ace/xenophobic idiot James ‘Biggles’ Bigglesworth and his plucky pals Algy, Ginger, Wavy Gravy, Dr Snuggles, Bumfluff and Slot-Badger. (Note to younger readers – Biggles is like a Bakelite James Bond but with touch rugby instead of sexy birds and lashings of ginger beer rather than vodka martinis.)

Or at least we thought we were. The film’s producers – an unlikely-sounding duo named Pom Oliver and Kent Walwin – have other ideas. Bad, strange ideas involving Americans and time travel and all kinds of other hokey nonsense that will treat the original source material like a baby treats a nappy. Biggles, you see, isn’t deemed strong enough to carry a Biggles movie. What he clearly needs is some form of unleveraged narrative buy-out that will see him continue to head up the film in an ambassadorial capacity. All the while, the day-to-day running of the concern reverts to an ashen-faced Yank plucked from a prison acting workshop and jimmied crosswise into a timesliding maelstrom of sonic weapons, synth-pop, clockwork gorillas and milky tea.

This Eureka! moment would appear to have occurred to the scriptwriters when their mid-morning nap was disturbed by the impossibly loud ker-ching! emanating from the opening weekend box office of time-twisting titans Back to the Future and The Terminator. Indeed, the American actor in question (Alex Hyde-White, son of Wilfred) looks a lot like Michael Biehn as styled by Marty McFly, sporting the star-spangled ensemble of an outsize red blouson, stonewashed Wrangler Bluejeans and ice white high-tops throughout.

Biggles, on the other hand, as essayed by the likeable but fairly awful Neil Dickson – who looks like Jason Patric if Jason Patric was a Second Division footballer – couldn’t be more British if he were a steam-powered bulldog shitting out crumpets and cricket balls onto a Union Jack. The resulting disconnect is on a par with parachuting a wiseass Californian teen and his pet robot into Lord of the Rings.

The First World War setting, time travel histrionics, uncomprehending protagonist and blasted locations can sometimes make Biggles feel like 12 Monkeys as seen from the monkeys’ point of view. More often than not it resembles stock footage culled from a databank of Culture Club, a-ha and Roger Waters-era Pink Floyd music videos that’s been stitched together by southpaw orangutans and served on a bed of cheapo orchestral stabs so loud, crass and jarring that they would make Giorgio Moroder burn his Synclavier and feast on its ashes.

War, as we all know, is hell. Time travel, meanwhile, is confusing. Biggles is as confusing as hell. And that’s not just Ex-Rent Hell talking – that’s physics.

This article was originally published in LWLies 43: the On the Road issue.