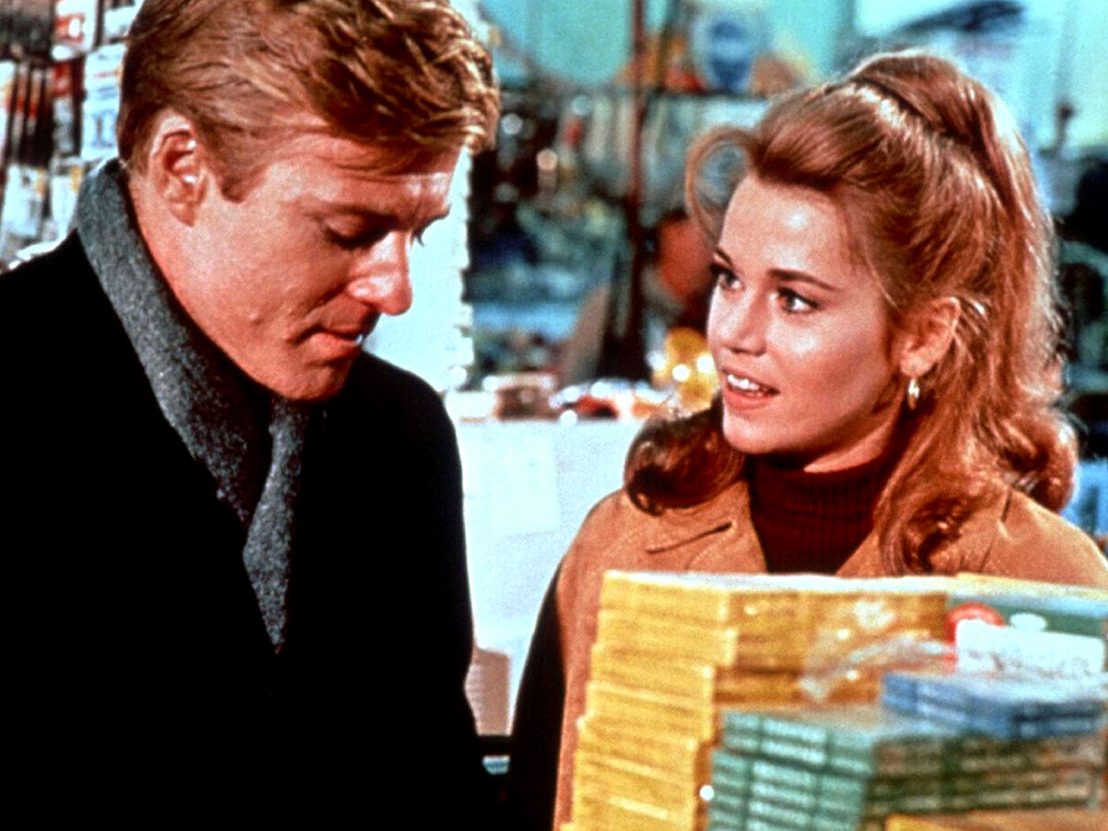 On-screen chemistry: you either have it or you don’t. Either way it’s an important factor in any movie romance. Emma Stone and Ryan Gosling had it in Crazy, Stupid Love, as did Katharine Hepburn and Cary Grant in Bringing Up Baby, but it’s Jane Fonda and Robert Redford in Gene Saks 1967 film Barefoot in the Park who really stand out from the pack.

Fresh from getting married, we meet Corie (Jane Fonda) and Paul Bratter (Robert Redford) kissing while sat in the back of a horse-drawn carriage on their way to The Plaza Hotel in New York City. It’s the opening scene of the film and the pair are instantly believable as a couple who are head-over-heels in love. They are so infatuated with one another that they don’t even realise they’ve reached their destination. It is then that a barrage quick comedic wit commences, with the two bantering back and forth in between kisses.

But it is when the couple check into the hotel that their on-screen flirtation attains peak tenderness. The concierge asks: “…and will Mrs Bratter be staying with you?” Temporarily forgetting they are now husband and wife Paul replies: “My Mother?” Realising what he’s said Paul affectionately bumps Corie’s head with his and laughs. The action appears so real and so doting it’s hard to believe that the two are are just acting.

It would seem that there may have actually been some reality to the infatuation, particularly on Fonda’s part. As she told Ellen DeGeneres: “I realise that I’ve grown up, because in the three previous movies, I was always in love with him. The only problem with working with Bob is that I just look into his… I kind of fall into his eyes and forget my dialogue. God, so good looking.”

This sense of adoration is mirrored in the duo’s fourth film together, Our Souls At Night. In one scene, the couple Addie and Louis are shown sitting in a car while Louis drives. Slowly, Addie scoots her way closer to Louis and tenderly places her head on his shoulder. Louis’ facial expressions as he sneaks a few glances at Addie while driving, and her besotted looks back at him, prove that the magic remains between Fonda and Redford.

What’s special about Barefoot in the Park is that it draws together two very different personality types. The vivacious and adventurous Corie and the conservative and dignified Paul. Almost echoing this is the relationship that forms between Corie’s mother Ethel (Mildred Natwick) and the couple’s neighbour Mr Victor Velasco (Charles Boyer). The film is about the struggles and sacrifices of married life. It looks at these polar opposites and asks the question: can love really conquer all? If the natural affection between Fonda and Redford didn’t exist, would the film have endured the way it has? They are so adorable together and their love is so convincing, so the film is a triumph. You’re made to care for the characters and you will them to work out their problems.

Based on a play of the same name, the film was largely shot within the intimate confines of a single small room. This factor is significant to the comedy aspect of the film, and reflects the closeness we feel for the protagonists. Director Saks makes exceptional use of the space, using it to accomplish some of film’s most hilarious moments. Five flights up (with a stoop, counted or not counted depending on your personality), a hole in the skylight, no bathtub, no heating and a bedroom the size of a closet, it’s no wonder the sarcastic one-liners fly high. These problems, combined with the couple’s contrasting personalities, become the ultimate test for their marriage. It is fascinating to observe how these characters change throughout the film, slowly realising that to make things work they have to reconcile their differences.

In the closing scenes we see Paul getting ‘lousy’ drunk while walking barefoot in Washington Square park. It’s a response to Corie’s repeated complaints about his sober and square demeanour. After Corie gets him home, Paul walks up onto the skylight, copying his oddball neighbour Mr Velasco who uses the roof to access his apartment above.

In an attempt to emulate some of Velasco’s adventurous qualities that Corie adores so much, a completely sloshed Paul slips and nearly falls. This in turn draws the couple back to one another – a brush with death helps to nurture the sense of romance and belonging further and deeper. The moment is dramatic, but also very funny and surprisingly sentimental. It serves as a final catalyst to knock some sense into the couple. It proves that while marriage is hard work, sometimes, it’s worth it.