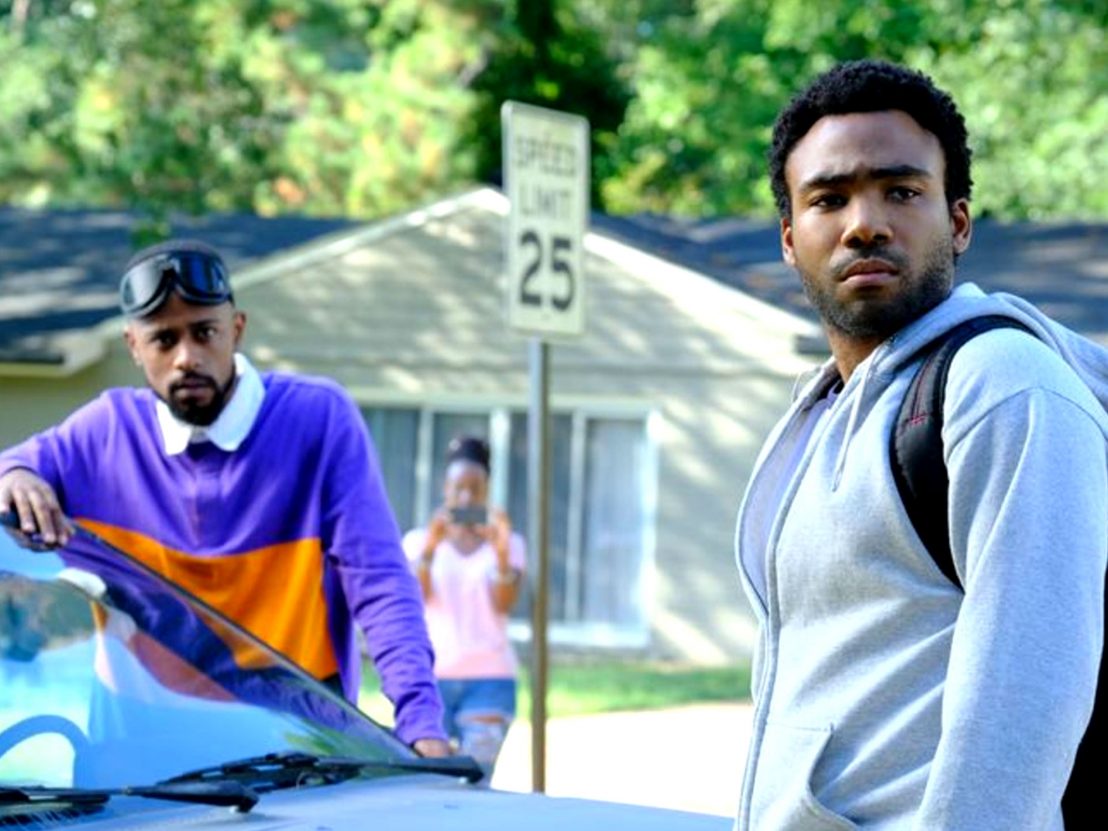 If there’s one thing unsurprising about Donald Glover and the music and visuals he creates, it’s that he manages to surprise us with every new project he presents to the world. Whether he’s channelling the high, soulful pitches of Prince on tracks like ‘Redbone’, or giving us a glimpse into the distant intimacy of black Atlanta, the one thing we can always rely on when it comes to Glover’s work is that his vision and emphasis changes from one episode, one song to the next. Atlanta’s Robbin’ Season premiere episode, ‘Alligator Man’, is no exception.

It has been two years since we last checked in with Earn (Glover), his cousin Alfred (Brian Tyree Henry) and the delightfully weird and sensitive Darius (Lakeith Stanfield) trying to catch a big break in the bleak suburbs of Atlanta, and nothing much has changed. Earn still tries to skate by on a nomadic lifestyle that keeps him on a constant look-out for the next best couch to crash on; Alfred’s house arrest has gained his rapper’s persona, Paper Boi, some more street cred, just not enough to get his career to truly take off.

And Darius? Well, Darius seems to be forever floating between his chosen environment, his strangely philosophical musings, and an eerie awareness capable of picking up on the faintest of vibes. The most noticeable shift in Atlanta’s second season is not found in the character’s circumstances, but the intensity of their daily lives and experiences having been accepted as a norm.

Stylistically, Atlanta has always been a show of raw, unpretentious urban beauty captured in a realistic light – often grey and crepuscular, as though the characters are stuck in the twilight, never quite managing to fully absorb even the smallest moment of brightness in their day-to-day lives. The opening moments of ‘Alligator Man’, which follow the robbery of a local Mrs Winner’s Chicken & Biscuits, dull and unmentionable in colour, accentuate the sad banality of just another day in an impoverished, black neighbourhood.

The fact that this particular Mrs Winner’s establishment acts as a front for dealing grounds is as customary as is the clerk’s access to an automatic weapon. “Robbin’ season. Christmas approaches and everybody’s gotta eat,” Darius casually remarks, sat on the roof of his car at the gas station. Across from them, another nameless black body’s funeral march is announced with blaring sirens while others already fade in the distance. A few cops linger around looking down on a pair of Timberlands sticking out from under a white sheet. “Or be eaten,” Earn mumbles in reply.

On their way to Earn’s appointment with his parole officer, Darius tells him about the Florida Man – an anonymous “alt-right Johnny Appleseed” type who appears in the headlines under this nickname. The Florida Man who shot an unarmed black teen or burst into his ex’s delivery room and beat up her new boyfriend while she gave birth. His take on the meme in the episode’s overall setting is as pointed as season one’s ‘Juneteenth’, albeit in a subtler manner – a perfect harmony of surrealism and authenticity –and feels particularly gruelling just weeks after the Parkland shooting, made possible thanks to a government ‘in cahoots’ with the NRA.

Shows like Broad City have already shamed the sunshine state for its racial hierarchy and gun-madness (as in season four’s ‘Florida’), but Atlanta’s ‘Alligator Man’ offers the Florida Man myth from the black perspective, in which the entire state – if not the country – itself becomes the bogeyman.

Arriving at uncle Willy’s (Katt Williams) house to smooth out a domestic situation, Earn finds himself in a position he doesn’t want to be in, one that could land him in jail, again, simply for being in the wrong place at the wrong time. The cops are already waiting outside and no amount of reasoning is getting Willy to budge. Having tried his best, Earn leaves, shortly followed by Willy’s alligator, Coach, who majestically strides out of the house, causing the cop to lower the weapon already twitching in his hand. It’s a cathartic ending to the story, given how it might have ended had Willy exited the house first, an anxious black man raising his fists, prepared to fight a battle he already knew he’d loose.

‘Alligator Man’ hones what Atlanta was already known for – a steady mix of satire, dark comedy and cultural narratives. It’s hard to tell where this season might lead, but we can rest assured it won’t be anything short of memorable.