Director Justin Kurzel is looking to transfer the star power that Michael Fassbender and Marion Cotillard infused into his fantastic version of Macbeth into a far more recent legend. Ubisoft’s Assassin’s Creed was the answer to the modern gamer’s prayers in 2007, blending the flawless detail of entire cities in the Holy Land with parkour style gameplay and hidden blade action.

However, in this intriguing first look we see the present incarnation of assassin Callum Lynch (Fassbender) experiencing his first foray into past life regression – by taking on the Spanish Inquisition. Nobody was expecting that!

Hopefully Assassin’s Creed will manage to circumvent the pitfalls of so many other video game adaptations (cf Prince of Persia) by appeasing fans of the franchise while simultaneously offering something for the uninitiated. There’s certainly something very attractive about this trailer, which shows Lynch forcefully inserted into the body of his assassin ancestor to take on some 15th-century heathens.

The soaring visuals, impressive free running action and use of Kanye West’s ‘I Am A God’ sets just the right tone. But unlike in the game, not all judgement can be avoided by hiding in the hay.

20th Century Fox have just released a killer new trailer. Watch it below and let us know what you think @LWLies 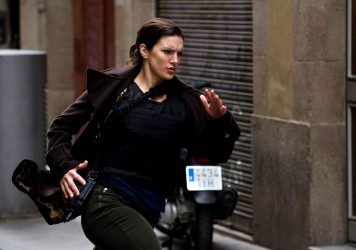