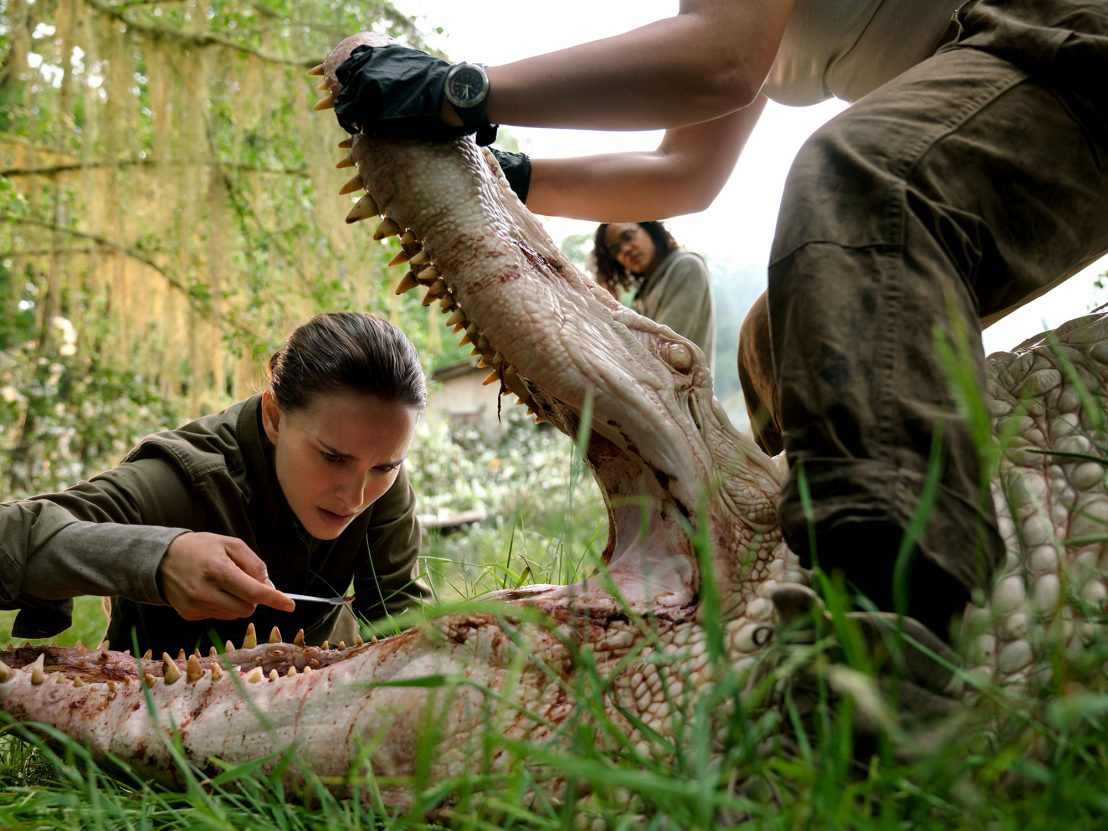 There is a playful irony to the title of writer/director Alex Garland’s Annihilation. The film takes place primarily in ‘Area X’, a coastal region where a strange, petroleum-like shimmer has begun to grow. Lena, a biologist played by Natalie Portman, is tasked with investigating the phenomenon along with four other scientists; the most recent expedition after a string of failed missions. Inside they discover all manner of biological mutations occurring at an accelerated rate – creatures both monstrous and beautiful emerging from the lush, wet forest. Far from destruction, life here is flourishing, albeit in an unknowable, terrifying manner.

Adapted from author Jeff VanderMeer’s ‘Southern Reach’ trilogy, Annihilation exists at the vanguard of an emerging, radical eco-philosophy, one in which traditional distinctions between humans and non-humans are being deconstructed. Such thinking – recently popularised by Timothy Morton’s book ‘Being Ecological’ – has emerged partly from the environmental crises of the moment: climate change, mass extinction and widespread plastic pollution. Together these processes are exacting a physical effect on the permanent records of geological data, the collective results of which many scientists are referring to as the Anthropocene (British writer Robert Macfarlane provides a useful primer on the subject).

This new geological epoch chronicles the significant impact humanity is having on the planet – yet Annihilation is not the first film to grapple with questions of the Anthropocene. Douglas Trumball’s 1972 sci-fi Silent Running imagines a future in which all plant life on earth has become extinct. In the film, Bruce Dern’s ecologist and botanist hero, preserves a few remaining species in giant domed greenhouses aboard a commercial space freighter. A decade later, experimental filmmaker Godfrey Reggio surveyed the shifting relationship between humanity and nature against the rapid industrialisation and technological advancement of the 1980s in his abstract visual essay Koyaanisqatsi.

And just last year, Blade Runner 2049 showed us an orange, dust-filled future blighted by ecological devastation, not dissimilar to Interstellar’s premise of agrarian crisis. Countless other films have tackled or touched on this subject, including high-profile documentaries such as An Inconvenient Truth and its recent sequel. No other film, however, has examined the dissolution of the human self as closely or in the same specific ecological context as Annihilation. 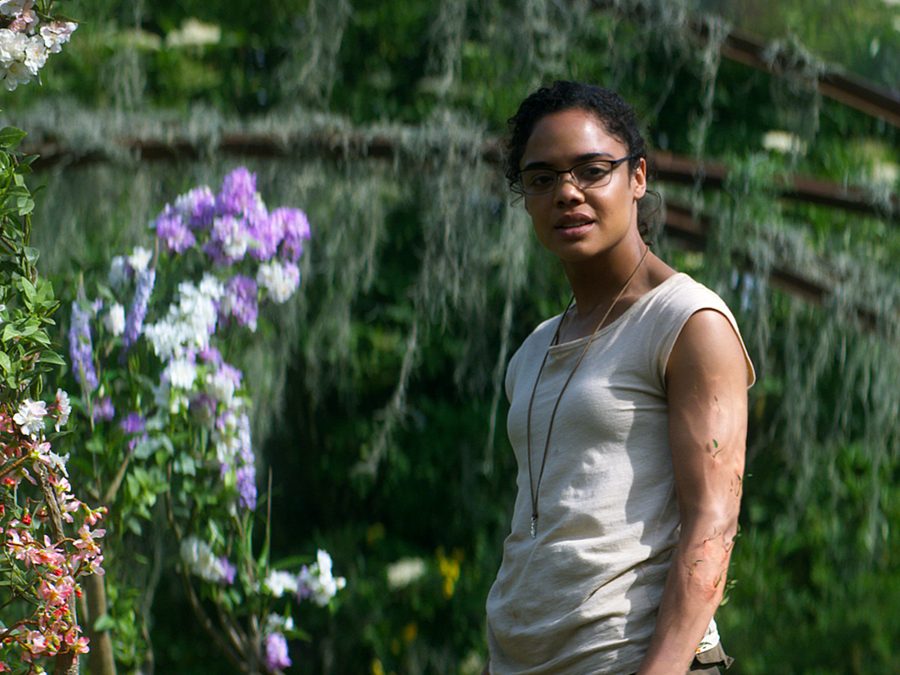 If the Anthropocene is symptomatic of humanity’s hubristic domination of nature, then Annihilation seeks to restore some existential balance, limiting the distance between people and the plants, animals and bacteria living in the same global habitat. Early on in the film we see Lena teaching her students about tumours. “All cells were ultimately born from one cell,” she says before Garland cuts to a close-up of wriggling, splitting cells – a motif he uses throughout the film. By focusing the camera’s gaze on such microscopic matter, he effectively breaches the gap between humanity and its conjunctive life forms.

As the camera pulls back to encompass not only Lena and her colleagues but also the roaming fauna and flora of Area X, the extent of their genetic entanglement is revealed. In one scene, the team discovers a handheld video camera from an earlier expedition. On it they find disturbing images of Lena’s estranged husband, Kane (Oscar Isaac), slicing a colleague open, revealing slithering tentacles where his intestines should be. Later, the screaming voice of the group’s geologist, Cass (Tuva Novotny), is heard from the inside of a disfigured bear. Her pain – a voice we instantly recognise – has become the howl of the Anthropocene, revealing its torturous potential.

Annihilation’s body horror has been retooled for our current age of ecological crisis, yet again demonstrating the genre’s malleability. David Cronenberg’s early films Shivers and Rabid were a response to public hysteria over sexually transmitted infections, while Ridley Scott’s Alien depicted sexual violence amid a period of changing gender politics. Garland’s film traces a line through these cinematic developments all the way back to the genre’s roots via such classics as The Fly and The Thing, both of which explore the horrific possibilities of genetic engineering.

The iridescent plant life and Area X’s polymorphous wildlife don’t emanate from human interference like Annihilation’s 1950s forebears. There is nothing anything living within the contaminated zone can do to halt its malignant effects. But in the plurality of responses they give, Garland digs into psychological responses to the Anthropocene and the impetus to limit the space between humans and non-humans. When Kane unveils the transformed insides of his companion’s abdominal cavity, it reveals a horror and revulsion at the thought of sharing a space with non-humans.

Moments of beauty persist alongside the film’s grotesque discomfort. Flowers glisten with vivid colour; deers graze quietly in the undergrowth, their antlers made up of blossoming branches. At one point, the team discovers plants that have taken human form, mimicking our physiological dimensions with knotted limbs and winding foliage. Tessa Thompson’s physicist, Josie, finds this particular mutation within herself, her skin prickling with emerging flower buds. The terror of earlier encounters with such unlikely transformations has given way to acceptance (the name of the final book in VanderMeer’s trilogy), as Josie gives herself over to a shared form.

The film’s captivating crescendo – a dance sequence between Lena and an indistinguishable alien being – captures the unrelenting, graceful fluidity of Area X’s processes. Similarly, in the age of the Anthropocene, it is the moment when traditional barriers between humans and other forms of ecology break down. As Lena’s dance partner slowly assumes the form of Lena herself, we are witnessing the merging of human and non-human. By the end it is not clear which is which. 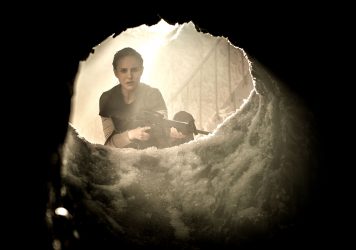