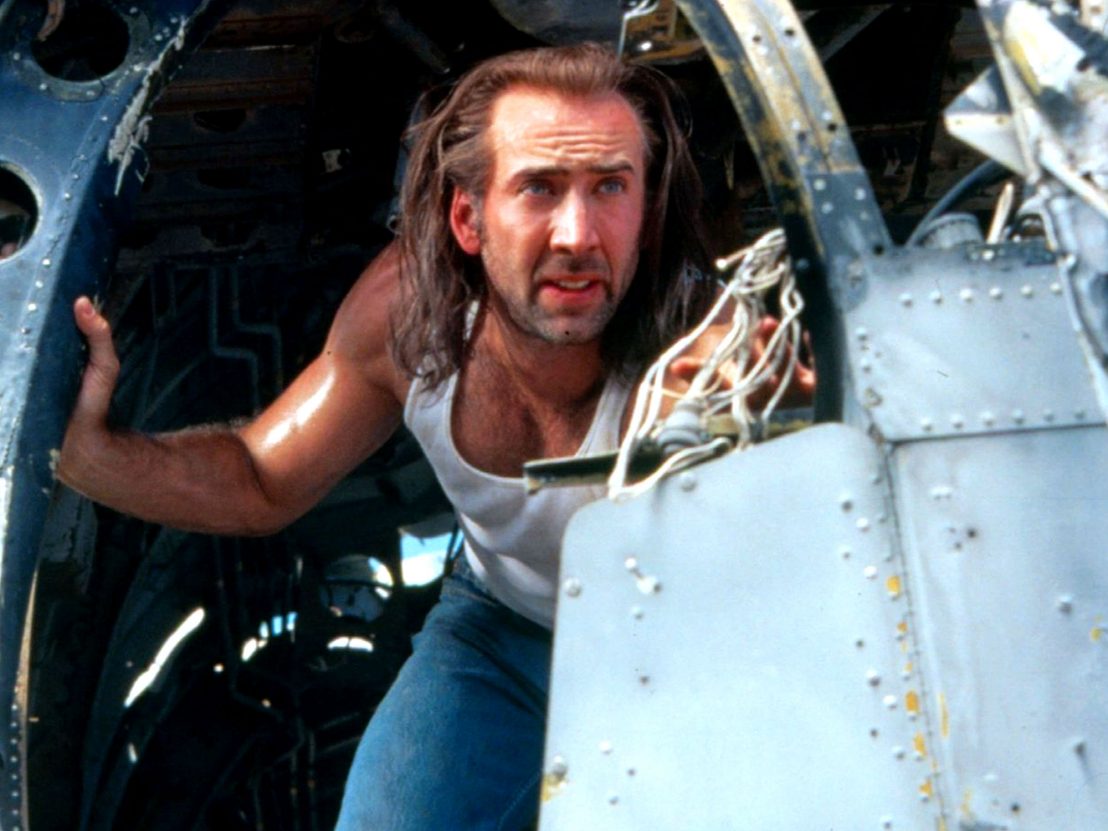 It should have been obvious that some sort of cinematic pinnacle had been reached with a speedboat-chase finale in which an immaculately-attired Nicolas Cage is dashed overboard by an equally sharp-suited John Travolta, only to haul himself back into the action via some impromptu jetskiing and murder his assailant with a harpoon gun to the guts. That’s hindsight for you.

Not that Face/Off, with its ludicrous premise, capricious body count and herculean levels of overacting from Cage and Travolta, wasn’t gratefully received when it was released back in June 1997. The Washington Post even described it as “genius”. Just three weeks earlier Con Air (comparable premise and body count, only with John Malkovich facing down Cage in the overacting stakes) was met with similar cheer by critics and audiences alike. There was little acknowledgement, however, that this was a high point for Hollywood action cinema.

Yet peering out from the superhero-swamped vantage point of 2017, the summer of ’97 looks like exactly that. Together, Con Air and Face/Off epitomised a short-lived peak for a genre that would soon plummet into mega-budgeted, pokerfaced inanity.

Generally speaking, the era was a fertile breeding ground for a very specific model of action film – cheerfully absurd, mid-budget, bearing the influence of the great Hong Kong action films of the previous decade. In addition to Con Air and Face/Off, The Rock, Air Force One, Hard Rain, Broken Arrow and Speed were all released within a euphoric four-year period and, to varying degrees of success, each combined a high-concept premise with just the right amount of winking self-awareness.

Time and place are key here. While Hollywood produced plenty of decent action movies during the ’80s, various political clouds hung rather joylessly above almost all of them, be it the necessity for barely-veiled Vietnam re-enactments like Rambo, Predator and Aliens, or the Cold War commie-phobia of Top Gun and Terminator. It wasn’t until a full two decades after the conclusion of the Vietnam War that American action cinema was finally able to dispense with the humourlessness that characterised so much of its Reagan-era output.

With America’s inferiority complex shelved for the time being, the cartoonishly muscular, perennially grimacing performances from the likes of Schwarzenegger and Stallone made way for the kinds of action stars who’d been around the block a few times and just wanted to have some fun. Cage, of course, was the main beneficiary, the triple-whammy of The Rock, Con Air and Face/Off representing arguably the hottest streak of any action star that decade. This was Cage before the bear suit, before the bees, before he’d mutated from genuine A-lister into living, breathing meme. 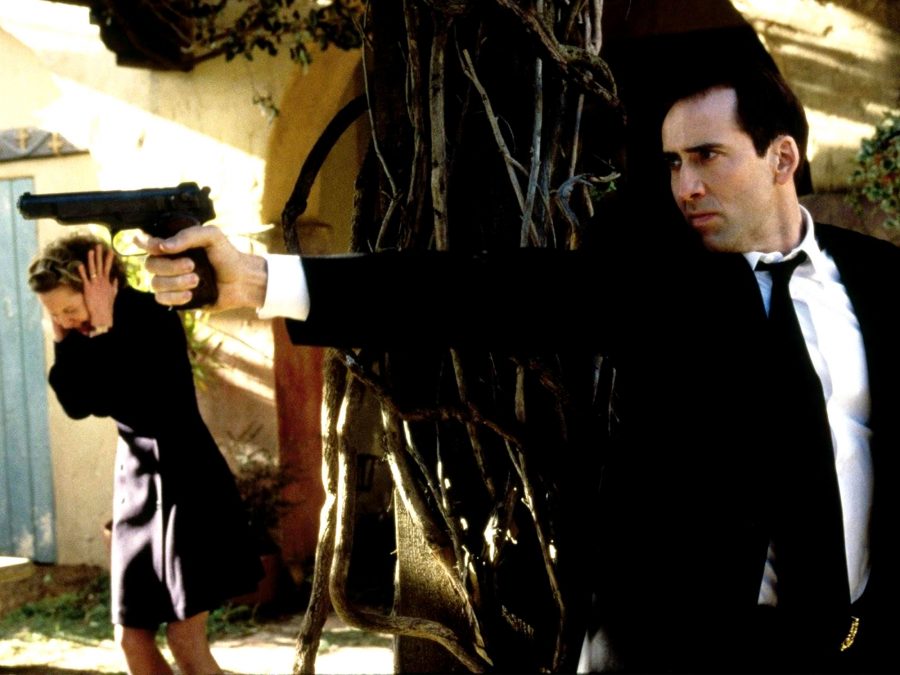 Like the genre in general, Cage’s ’90s heyday was typified by his ability to walk the tightrope between seriousness and self-awareness. Nowhere is this more evident than in the exuberant self-satirising of Face/Off, the highlight being Travolta-as-Cage bemoaning the “ridiculous chin” bestowed on him by the film’s central ploy.

And remember, this was pre-9/11, an event whose gravity was duly echoed in the sombre, politically-engaged mood that was swiftly adopted by action cinema throughout the 2000s. For a short time during the ’90s, action movies reflected the brief period – roughly between the fall of the Berlin Wall and 9/11 – when America viewed itself as a land of peace and possibility. A place where a terrorist was an apolitical lone wolf to be played by Gary Oldman or Dennis Hopper, and the spectacle of a passenger jet ploughing into the Las Vegas strip prompted only good-natured entertainment.

Cultural conditions were not the only force in this perfect storm. While the ’90s were hardly a franchise-free zone – the Die Hard and Terminator sagas had already begun their interminable lifespans, albeit with raucous early instalments – nor were original ideas the studio exec heresy they are today. On the contrary, the ideas were the movies. Whether it was ‘former army hero takes Alcatraz hostage’, ‘president does battle with plane hijackers’ or, most gloriously, ‘terrorist and cop swap faces as part of FBI counter-terror operation’, each film was the product of the sort of funky fag-packet premise that has largely been consigned to history amid today’s era of remakes, reboots and extended cinematic universes.

It’s worth noting at this point that of the seven films mentioned above, only Speed inspired a true sequel. Two years later The Matrix – whose bolt-from-the-blue success spawned sequels, spin-offs, video games and fan fiction aplenty – arrived, and another two years after that The Fast and the Furious – now the most lucrative movie franchise of all time – came crashing into view.

The Matrix wasn’t just a game-changer in franchise terms, either – it also showcased the extravagant next levels of scale and spectacle enabled by significant advances in CGI. Previously, special effects had been used largely to produce such quaintly low-key imagery as a bus vaulting over some missing road, or Alcatraz Island being firebombed; as the new millennium dawned, they could be used less to complement a scene’s surroundings than to simply generate them from scratch. Worse still, the effects became an attraction in themselves, with the Wachowskis’ ‘bullet-time’ innovation mimicked ad nauseam by the countless Matrix imitations which littered the early to mid 2000s.

Ironically for a film that wears its Hong Kong action cinema influences so lovingly – most obviously in the hand-to-hand fight scenes that were meticulously fashioned by chopsocky maestro Yuen Woo-ping – The Matrix did plenty to rid Hollywood action cinema of the real-world, stunts-and-choreography grounding that was the proud hallmark of those filmmakers. It’s no coincidence that John Woo, whose tableaus of balletic bloodshed required little in the way of computer-generated assistance, never again made anything to match the glorious high of Face/Off and quickly retreated back to his native Hong Kong after a couple of early 2000s duds.

That era seems a long time ago now. And while it’s possible that the next golden era of action cinema is lurking just around the corner, the summer of ’97 feels unlikely to be repeated any time soon. Films like Con Air and Face/Off are easy to take for granted. So the next time you arrive home late at night to be greeted by the majestic sight of Nicolas Cage sailing sideways out of a crash-landed airplane, a gold-plated semi-automatic blasting away in each hand, take a moment to savour the fact that a film of such magnificent lunacy was even made at all. 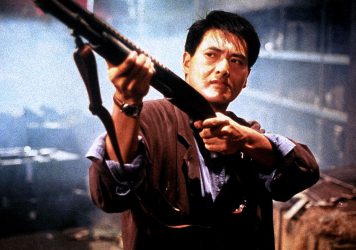