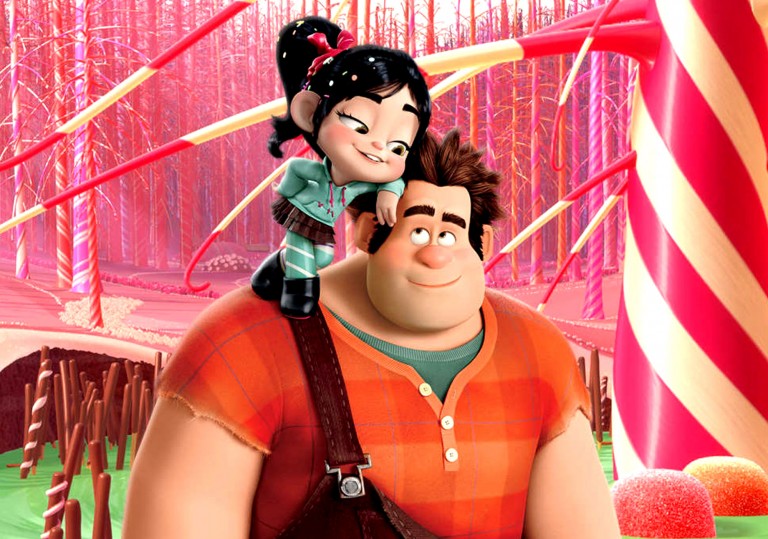 Achievement Unlocked! The prospect of some of gaming’s most loved characters coming together is an enticing one.

Try Again? Confusing and cynical, the film fails to deliver on its scintillating premise.

Game Over! Play an actual videogame instead.

Remember the opening credits of Scott Pilgrim Vs. The World, specifically the 8-bit remix of the Universal theme right at the top of the film? Well, judging by the first few moments of Wreck-It Ralph, so does someone over at Disney: the film employs the exact same concept for their own heavily pixelated intro sequence.

It’s a cute, suitably retro touch, albeit one that exposes Wreck-It Ralph’s most conspicuous flaw. Sure, director Rich Moore’s wonky animated pastiche throws together elements of Toy Story, Monsters, Inc. and Who Framed Roger Rabbit, then piles on the classic videogame references faster than Sonic the Hedgehog – the spiky blue Sega veteran who gets a suitably fleeting cameo appearance early on. But by shamelessly riffing on other sources, Wreck-It Ralph struggles to establish its own identity.

The story focuses on John C Reilly’s laconic Ralph, a ‘bad guy’ character in an old-fashioned, Donkey Kong-style platform game called Fix-It Felix. Tired of playing the villain, Ralph sets out on a perilous mission that he hopes will earn him the respect of his peers. Alas, none of it makes any sense.

The world of Wreck-It Ralph demands we accept that gaming characters are living, breathing creatures who inhabit consoles and travel in and out of each others’ games via the cables and plug sockets of the arcade. Sadly, no further thought has been put into the logic of how such a universe would function.

For instance, the biggest threat to the entire cast of characters is the prospect of their own machine being taken out of service. This, it is hammered home throughout the film, is essentially the same as death. And yet no one seems worried about the prospect of a power cut or some other apocalyptic event such as (the horror!) someone switching the plugs off.

Surely the arcade owner and software designers should be in cahoots with Ralph and his colleagues for such an elaborate infrastructure to operate? And what purpose does their slavery to electronic entertainment serve anyway? None of this is addressed, as Wreck-It Ralph takes one hell of a basic concept and runs it into the ground by reducing the core story to a crass, mildly depressing morality tale about being grateful with whatever terrible cards you’re dealt in life.

This cynicism pervades throughout: a good chunk of the action takes place inside a videogame called Sugar Rush, a sort of Mario Kart clone set in a very fluffy, very pink world of sugar mountains and candy canes. Sadly, it’s just a handy platform for some hardcore product placement, including a particularly troublesome endorsement for Mentos and Coca-Cola (you can probably guess how they’re utilised).

Still, there are some decent gags and neat little touches. The appearance of the ’80s gaming icon Q-Bert at a key story moment is surprisingly delightful and the incessant hat-tips to gaming history will have nerds in hysterics. But Wreck-It Ralph is B-grade Disney, more Chicken Little than Woody and Buzz.

Achievement Unlocked! The prospect of some of gaming’s most loved characters coming together is an enticing one.

Try Again? Confusing and cynical, the film fails to deliver on its scintillating premise.

Game Over! Play an actual videogame instead.