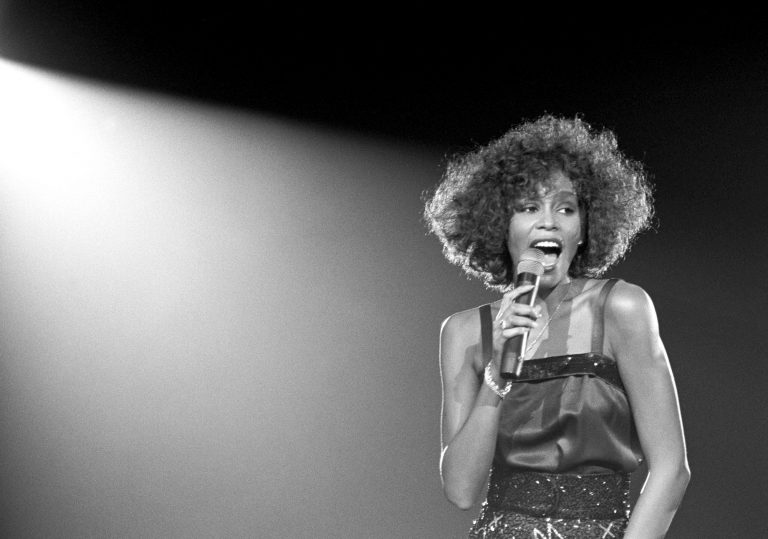 This image – at odds with her ghoulish death – is resurrected in Nick Broom eld and Rudi Dolezal’s respectful documentary about the late superstar singer. “How much has success changed you?” an off-screen interviewer asks Whitney at the peak of her world domination, just after the release of 1992’s The Bodyguard. She pauses (serenely) then says: “Success doesn’t change you. Fame does.”

The fame industry is the underlying subject of this film, its values determining Whitney’s path and its gaping maw always cajoling the singer to generate more riches, faster, don’t stop. When Whitney’s star took off as a teenager, she brought people with her: family, friends, drug buddies. She ended up as a big glowing cog at the centre of a machine that provided people with their lives. She was always generous. She bought houses for friends. But when she needed to slow down, people couldn’t look past their vested interests, the doc says, so she retreated into drugs.

Broom eld and Dolezal have the side-players tell this story. That is, the make-up artists, the session musicians and those watching in the wings. We don’t hear from anyone at the centre of the entourage that travelled with Whitney, stuffing baggies up orifices to transport narcotics on world tours. Bobby Brown emerges as one of the key figures in shaping her life. He was an MC, husband, and father of her daughter, Bobbi Kristina. There’s also Robin, Whitney’s best friend and a source of solace. There were intimations that Robin and Whitney were in love, but as an archive interview between Oprah and Whitney’s mother, Cissy, shows by example, homophobia was too rife for a lesbian relationship to flourish.

This is not a formally ambitious documentary styled to win awards for innovative storytelling. Humility towards the subject, deference to the facts, dogged reliance on standard-issue doc-making materials (talking heads, archive interviews, concert footage) form the basis of a chronological jog through a life that began in New Jersey in 1963 and ended in the Beverly Hilton in 2012.

It is a story compelling for its sadness, yet the filmmakers avoid sensationalist touch-points. Unlike Asif Kapadia’s similarly-styled survey of Amy Winehouse, Amy, there is a focus on the woman rather than melodramatic hand-wringing, and unlike in Amy, there is evidence that graft has been undertaken to the keep the subject’s values at the centre. There is no lack of video or still photography of Houston in the public domain, but everything used in this film has been carefully pruned to show her thoughtful depths – indeed the final words go to Whitney saying how she would like to be remembered.

And that’s a difficult task when she isn’t here to ask, so the doc returns, time and again, to that voice, and when the end comes, it’s Whitney’s voice that we hear. The lack of access to her loved ones dilutes the film’s sense of intimacy, while adding melancholy by forcing the realisation that her former world has gone up in smoke.