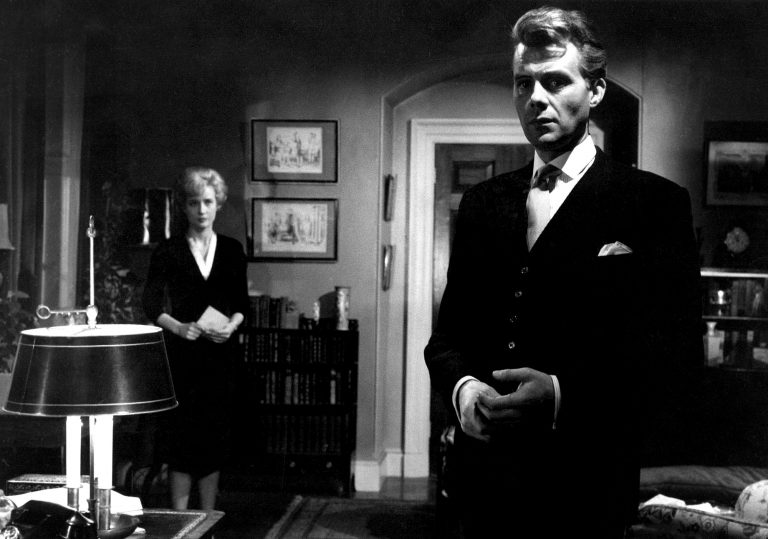 Often seen as one of British idol Dirk Bogarde’s most important and personal roles.

The subject remains extremely powerful, even if it – cinematically speaking – it’s a very straightforward story.

The film’s presentation of sexual oppression remains shockingly relevant to this day.

A welcome re-release of Basil Dearden’s chilling survey of life as a gay man in London of the early ’60s.

You want to be able to watch a movie like 1961’s Victim and breathe a sigh of relief that the world and social attitudes have moved on. You want to believe that such absurd and illogical levels of persecution would be a thing of the past, that people would embrace enlightenment and be happy to live and let live. And yet, it’s a film whose subject still rings alarm bells today, being about the lives of gay men in London when the draconian Sexual Offences Act (aka The Blackmailer’s Charter) was still being enforced and they were nudged deep into the shadows.

There are some in the film who see homosexuality as a sick perversion, but its focus remains trained on the ever-widening ring of blackmailing fancy boys who extort money by photographing men in compromising positions and then threaten to shop them to the cops. Dirk Bogarde is superb as Melville Farr, the stylish upstart barrister who has it all: the plush house, the doting wife (Sylvia Sims) and the prospect of soon being appointed a judge. But a stolen moment with a young man in a car by a park is captured with a prying telephoto lens, and suddenly Farr’s prospects are looking dim.

Basil Dearden’s methodical film shies away from hysteria and base shock tactics to focus on the personal, far-reaching trauma caused by this law. The ice-cool Farr thinks that, with his broad legal skill set, he can untangle this mess with compromise, backroom talks and sensible dealing, but he is quickly made to comprehend just how high the chips are stacked against him. Perhaps the most tragic element of the film is how ashamed he’s made to feel about his sexuality, but that he’s also genuinely in love with his wife.

This is a film of men engaging in awkward conversations and talking in a kind of semi code. For the first ten minutes, where the existence of the photograph comes to light, Dearden makes it look like some kind of gentleman spy ring has been compromised. What’s great about the film is that it never resorts to the type of crude gay stereotypes that likely fuelled the rabid ire of homophobes at the time. The men trying to keep their sex lives hidden are entirely normal and, in fact, rather dull. There are some more flamboyant characters, but they are rooted in reality rather than a simplistic cultural perception.

In acknowledgement of the 50th anniversary of the repeal of the Sexual Offences Act, Victim gets another welcome run-out in UK cinemas. But it’s worth seeing for what it has to say about the engrained bigotry of today rather than just its depiction of crueller times past.

Often seen as one of British idol Dirk Bogarde’s most important and personal roles.

The subject remains extremely powerful, even if it – cinematically speaking – it’s a very straightforward story.

The film’s presentation of sexual oppression remains shockingly relevant to this day.