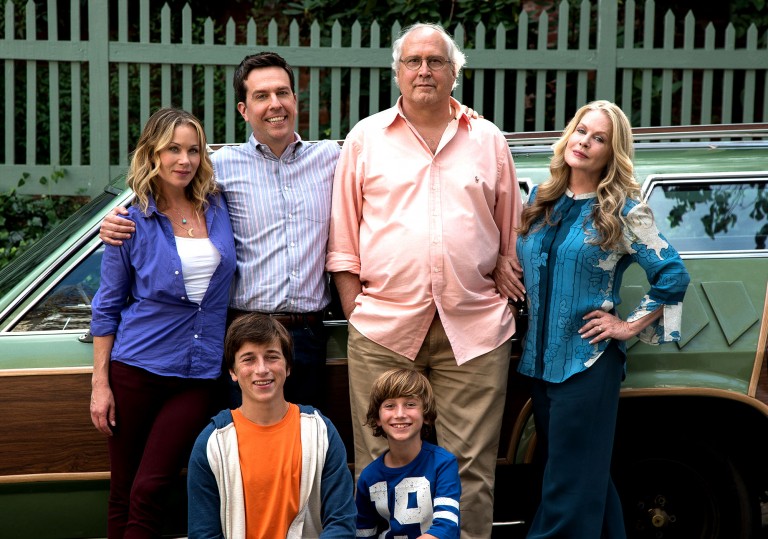 Why not? But then again, why?

Intermittent, buried underneath a lot of muck.

The journey isn't worth it.

During the opening credits to Vacation, we see a bunch of holiday themed photos: families on vacation, babies, road trips, etc. revealing that instead of something sweet, something gross or unfortunate is happening. A smiling woman is sitting on a horse on a beach. Turns out the horse is urinating. Some of the photos are funnier than that, most are not.

The credits mirror the structure of the film itself: a family is doing something they are enjoying, only for it to turn into a disaster. The Griswolds enter a hot spring, but it turns out it’s a sewage dump. They have a nice conversation with a truck driver, who then pursues them across the country. They go rafting in the Grand Canyon, and the instructor decides he wants to commit suicide via waterfall. It’s a set up that can be funny. It’s a shame that Vacation is not.

Vacation is a reboot-cum-sequel to the 1983 Chevy Chase comedy, National Lampoon’s Vacation. In the original, Clarke Griswold (Chase), takes his family on a road trip to the theme park Walley World. On the way there, they run into trouble and Clarke loses his mind.

In 2015, his son Rusty (Helms), decides to do the same thing with his family. He is at least partially motivated by overhearing his wife Nancy (Christina Applegate) complain that they go to the same vacation spot each year. His solution to the problem is to spring a road trip on his family without consulting them or asking them what they feel like doing. Instead, they get to go to the place where he vacationed as a child. The family gets in the car and hits the road.

What follows is a road trip film that delivers scattered laughs, a lot of tedium, and some offensive humour. It feels like a timeless film in the bad sense of the word: Vacation has little to say about vacations or families today. The themes that are maintained throughout the film come to swift, banal resolutions.

It tries a couple of times: Rusty has a nice little meta moment early on, Nancy is accosted for not liking her friend’s Instagram photos from Paris, and Chris Hemsworth’s Stone is set up as a macho conservative rancher, in contrast to Rusty’s ineffectual suburban man. But besides a few prods, the film doesn’t really go in that territory: it’s as if it is terrified of alienating parts of its audience by making genuinely biting remarks. This results in a toothless film that feels bland and unwilling to go beyond the obvious punch lines. Instead what Vacation finds funny is torturing its protagonists, time and again, and in increasingly unimaginative ways.

The performances are all there. Helms really throws himself into the role, and matches Rusty’s borderline insane behaviour with a lot of manic energy. Applegate is underused, but does well with what’s there. The kids share a small arc that is inconsequential at best.

There are a couple of moments when Vacation suggests like it might be about to turn into something funny and affecting. Helms’ attempt to be his son’s wingman is funny because of his willingness to commit to the bit. When Charlie Day’s raft instructor takes the Griswolds towards a waterfall, the film goes into a slow motion montage that is a welcome break from the barrage of gross-out humour. The Griswolds swear a lot, which makes them sound like a real family.

But despite the bright spots, the film can’t stop falling into bad habits. The film’s climax looks like it’s going to go for something sweet, the one moment that will bring the journey full circle, but then wastes it all for one more punch line that doesn’t work. Go home, Vacation. You’re drunk.

Why not? But then again, why?

Intermittent, buried underneath a lot of muck.

The journey isn't worth it.