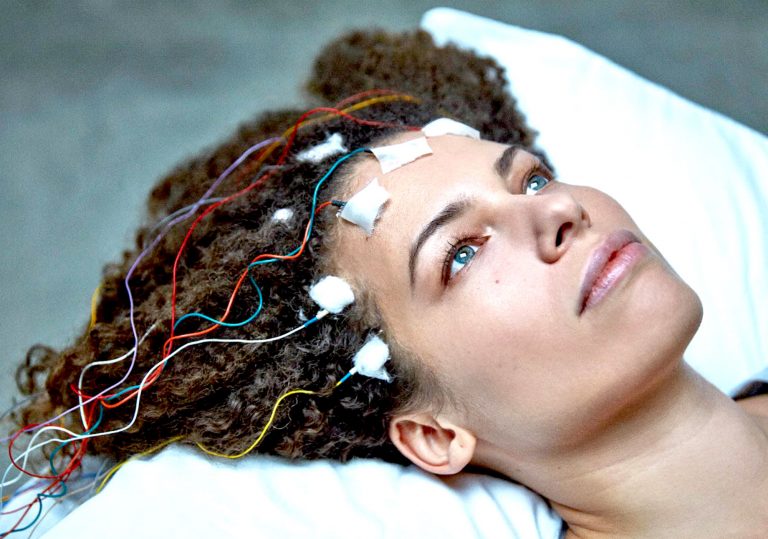 Lauded at Sundance for its original take on an enigmatic condition.

ME is the subject, but this film touches on anxieties connected to all forms of physical and mental decay.

This is a film about being lost inside your own body. Jennifer Brea had a life of fun and frolics laid out ahead of her. She tramped a path around the world, met people and collected unique experiences in far-flung locales. And then everything suddenly slowed down to a halt when she just couldn’t muster the energy to get out of bed in the morning. Then she couldn’t move her limbs. And then she began finding it tough to form anything more than guttural moans.

Her body gave up on her. She discovered that she was suffering from Chronic Fatigue Syndrome (or ME as it’s more commonly known). It’s a condition that remains a complete mystery – no one knows what causes it, how long it lasts or how it can be cured.

At a low ebb, Brea then decided to pick up a camera and document her experiences as well as collect personal testimonies from sufferers across the globe. When the term ME was coined, certain wags would refer to it as “yuppie flu”, and the task here is to overturn these glib assumptions. Just 10 seconds of footage capturing Brea walking through her garden and then suddenly slumping to the floor in agony, screaming that it feels like her head is expanding, should really be enough to put paid to any remaining doubters. This is a simple, informative and clear-eyed advocacy documentary that taps into the essential truth of how we are all essentially prisoners in waiting.

Though the film is formally a little unexiting, Brea makes sure she captures the extent of the physical and psychological pain she experiences daily, and much of her frustration derives from a lack of information. Plus, she agonises over the fact that she’s hampering the progress of her go-getting husband, who has to spend much of his time tending to her. The film works because, even though it’s specifically about ME, it picks apart the social stigma attached to all forms of illness (and all forms of cure). Through her various case studies, Brea shows how some people are getting it right and others are getting it very wrong.

Lauded at Sundance for its original take on an enigmatic condition.

ME is the subject, but this film touches on anxieties connected to all forms of physical and mental decay.