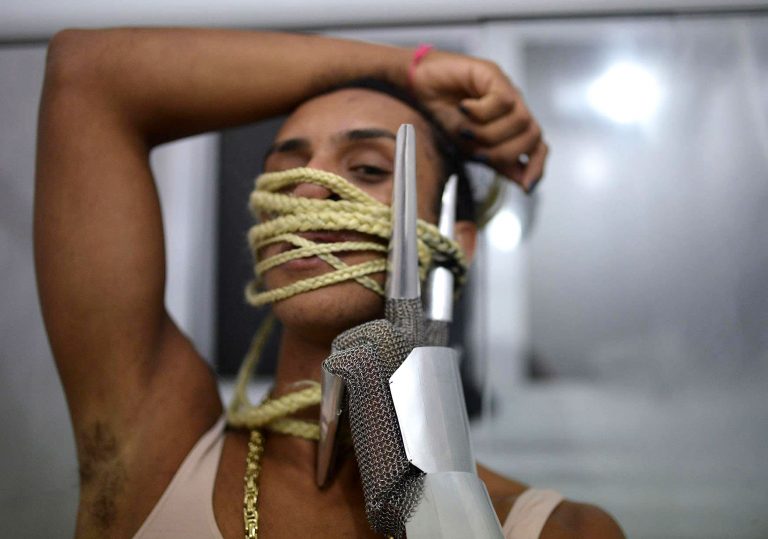 That is what you call a memorable movie title.

The lovable Linn da Quebrada makes for a fascinating subject.

The film lacks for emotional impact and structure, but time spent with Linn is certainly eventful.

On the life of a poverty-stricken Brazilian trans performance artist disco poet in remission from cancer.

The title of this scrappy documentary profile refers to one of the many epithets used by its subject, extrovert performance artist Linn da Quebrada, to self identify. She does so while twerking on stage at a club, kitted out in black netting and a chainmail mitt with pointy metallic cones attached to each digit. This is all part and parcel of a musical stage act where she intones confrontational poetry set to a background beat – technically, her schtick lacks finesse and verve, but to the many punters in the crowd, who bob and grind in the purple spotlights, she is an outspoken goddess.

Claudia Priscilla and Kika Goifman’s impressionistic film offers a loose biography of Linn, splicing together her energetic performances with footage of her chatting to friends and a few snatches of archive in which she undergoes treatment for testicular cancer in the most glamorous way imaginable. Identity, abuse and widespread transphobia are hot topics of conversation, and there’s a lot of deep discussion about how a person can have an almost sexual relationship with their own body. Linn doesn’t really talk about anything other than her attempts at self definition, which is totally understandably seeing as she comes from such a marginalised sub-set.

Even at just over 70 minutes, the film doesn’t really have any cohesive structure or even attempt to contrive a wider arc. It’s just a series of random episodes in Linn’s life which can involve silly drinking games with one of her bandmates, or just splaying her anus in extreme close-up while taking a shower. In one strange and rather moving sequence, she takes a shower with her mother, and they wash each other with no sense that they’re playing to the camera.

One other element that makes Linn an interesting case study is that she comes from the favela and is openly interested in representing LGBQT+ folks who come from a background of poverty. Her flamboyant manner, allied with the almost comically confrontational content of her lyrics (sample: “step inside my anus / it’s as big as an apartment.”) makes more sense when it’s clear that her mission is to empower those who maybe don’t have the moxie to, say, spend their time in chemotherapy voguing into a mirror.

That is what you call a memorable movie title.

The lovable Linn da Quebrada makes for a fascinating subject.

The film lacks for emotional impact and structure, but time spent with Linn is certainly eventful.