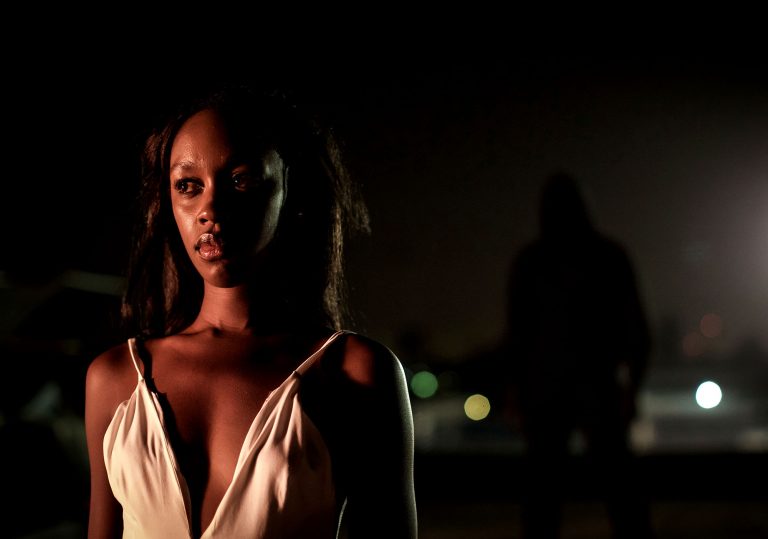 Get Out is the reason this happened.

…but the changed milieu makes all the difference.

This retro-styled slasher from first-time director Dallas Jackson has a distinctly modern flavour.

You can tell from early on that Thriller is a knowing throwback to the sensibilities of the classic ’80s slasher, simply because a black character – 13-year-old Amani (Bria Singleton) – is quite literally ‘the first to die’, conforming to the old trope of African-Americans being expendable victims in horror.

In fact, Dallas Jackson’s directorial debut follows a template set as along ago as Paul Lynch’s Prom Night: a cruel childhood prank that ends in a death comes back to haunt those who conspired to cover it up and let someone else take the blame. “Gonna get you!” are ‘special’, innocent Chauncey’s last words as he is carted off by police for a crime he did not commit. And four years later, after a brutalising spell in juvie shown in pencil sketches over the opening credits, the hoodie-wearing, muscle-bound Chauncey (Jason Woods) comes out a different man, even as the high school homecoming event of his former tormentors attracts a rising bodycount.

The difference here is that the setting is South Central Los Angeles, and everyone is African-American, Hispanic or Korean, so that the first and last victim – and every victim in between – is a POC. Indeed, there is not a white face to be seen in the film. Chauncey’s former schoolmate Derrick (Luke Tennie) gives the lay of the land when explaining to his teacher (Vanessa A Williams) why he has stopped bothering to pursue high grades at school:

“How about these percentages: the number one cause of death among young black men from ages 15 to 34: murder. Ninety-three per cent of murder victims are killed by someone who shares their race. And according to the CDC, last year, young black men from 15-34 were 10 times more likely to die of murder than whites in the same age group… My point is: my fate has already been decided for me.”

Meanwhile his friend Dre (Tequan Richmond) explains to Compton High School’s hard-assed principal (RZA, who also provides the film’s electronic score) why he is always playing tough despite his middle-class background: “So I can walk down the street, and not having to worry about a Blood or a Crip killing me! Or some punk-ass police looking to kill me! or a group of hoods trying to punk me! I have to act hard to survive!”

In other words, the sociopolitical milieu in which this slasher unfolds, though rather alien to the subgenre, nonetheless provides a perfect stalking ground where murder and youthful death are so normalised that any assassination-minded avenger can easily blend right in. For while there may be a stone-cold killer on the loose, we are also seeing an environment where armed men regularly shake down passers-by on the street, where a house party being broken up by the sound of gunfire is not unusual, where violence at school is commonplace, and where the odds are stacked against any of these teenagers ever escaping the hood.

In other words here, as with Jordan Peele’s Get Out, everyday black experience is exposed as part and parcel of the film’s more generic horror, with each informing the other. Even that title Thriller, shown up front in bold red before any actual scene, points to a change in times and attitudes between slasher horror in its ’80s heyday and in the present day.

For it evokes the song title (from 1982) through which another Jackson made a foray into the horror genre, back in more seemingly innocent times. The monster that Michael Jackson was then so playfully conjuring he has now, from beyond the grave, himself become, as we now see horror, for all its established conventions and cheesy fun, as masking demons – social, psychological, political – from an all-too real world.

By prominently featuring a ‘Thriller’ t-shirt, Peele’s Us played a similar game with MJ’s now tainted iconography, exploiting the anxious cognitive dissonance in our shifting perceptions of the singer to divide us, as viewers, from our past selves. The film Thriller certainly delivers all the cat-and-mouse death by numbers that we expect of a standard slasher – but it simultaneously uses the Reagan-era subgenre as a distorting prism through which we can also glimpse an actual community killing itself in the here and now – which is where the real horror begins.

Get Out is the reason this happened.

…but the changed milieu makes all the difference.