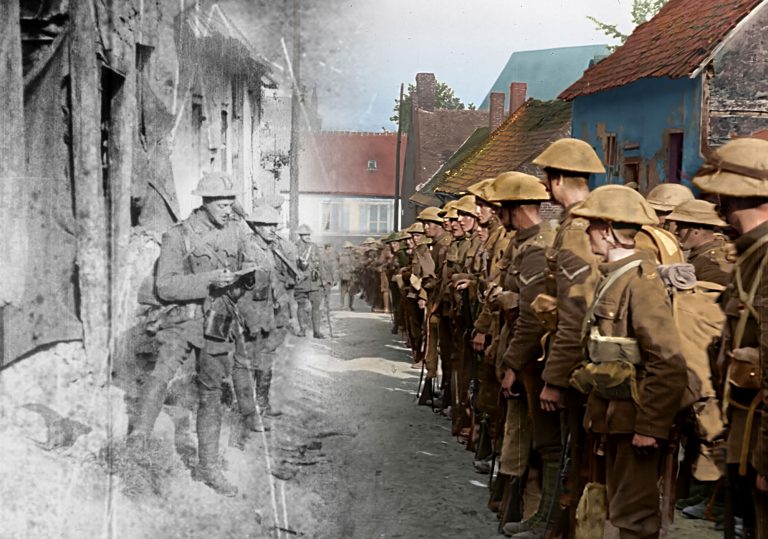 Peter Jackson does World War One. This could be big.

...but a rather self-defeating exercise all told.

“They shall grow not old, as we that are left grow old: Age shall not weary them, nor the years condemn. At the going down of the sun and in the morning: We will remember them.” Words can sometimes seem inadequate when trying to sum up an event of the scale and magnitude of World War One, but this passage from Laurence Binyon’s 1914 poem ‘For the Fallen’ stands as a poignant affirmation of the enduring gratitude, admiration and grief felt by those for whom the ultimate sacrifice was made by so many.

In his distinctly personal, typically dazzling ode of remembrance, Peter Jackson attempts to increase the clarity and immediacy of this timeless sentiment. But while They Shall Not Grow Old is undeniably impressive on a technical level, it’s debatable how much he ultimately succeeds. For starters, it should not go unnoticed that the director intentionally misquotes Binyon’s famous stanza in the film’s title – by doing so he signals an urge to obfuscate historical nuance for the sake of his own artistic vision. For all the craftsmanship and formal sophistication on display, Jackson’s film does not represent a more complete picture of the conflict in question.

It begins with a prelude to war. Flickery black-and-white images and anecdotal voiceover recordings of numerous ex-servicemen reveal a very different looking Britain. We hear veterans from all walks of life recalling their eagerness to enlist, apparently compelled not so much by an innate devotion to King and Country as the fear of missing out on such a great occasion. We see hundreds of young men cheerfully queuing outside recruitment stations, all wanting to do their bit. There is a palpable sense of excitement and nervous expectation, and it is haunting knowing that the fate of a large number of them was sealed right there and then.

These early scenes provide a fascinating window to the past while conveying the mood and mindset of the average Tommy prior to being dispatched to the battlefields of mainland Europe. If the unconventional framing of this portion of the film (something akin to peering into a plastic 3D viewfinder) creates distance between subject and viewer, past and present, however, the dramatic aspect ratio shift that occurs roughly 15 minutes in – when the image is miraculously transformed into crisp, full-screen colour – doesn’t necessarily bring things closer to home.

The issue is not the footage itself but the implicit suggestion that digital enhancement is essential to the longterm preservation of the memory and legacy of the fallen. In restoring, hand-colourising, and adding synchronised sound to the wealth of material at his disposal (some 600 hours of video and 100 hours of audio sourced from the Imperial War Museum’s archives), Jackson brings the experience of fighting in the trenches to life as never before in documentary cinema. History did not occur in black-and-white, of course, as Jackson is evidently keen to remind us, yet the sudden transition to colour draws attention to the inherent artificiality of his endeavour. It leaves us consciously examining the process – and ethics – of rendering real-life human tragedy as glossy spectacle.

That said, this is a hugely engaging and worthy project, filled with extraordinary tales of camaraderie, courage and unwavering conviction. There is plenty of evidence of the stiff-upper-lip spirit we so readily associate with the Great War generation; even more striking is the humility and humour shown in the face of such appalling circumstances. And it is at once surprising and shocking to hear soldiers describe an act as mundane as falling in the mud in life-or-death terms. Throughout all this, neither do the interviewees express the slightest hint of self-pity, nor does Jackson project pity onto them. This is the film’s greatest virtue.

Perhaps an opportunity for deeper reflection and understanding has been missed though. Watching this film, my mind turned to my great-grandfather, who was a rear gunner in the Royal Navy and a veteran of both World Wars. Though he died a decade before I was born, I feel a strong connection to him and think about him a lot around this time of year. There’s a faded, sepia-tinted portrait I’m particularly fond of in which he’s posing in his white service uniform, clutching a half-smoked cigarette and wearing a somewhat cavalier expression. Would he somehow seem closer to me if that photograph were sharper and in colour, its crumpled edges smoothed out? I’m not so sure.

They Shall Not Grow Old is released in cinemas 9 November, and airs on BBC2 this Sunday at 9:30pm GMT.

Peter Jackson does World War One. This could be big.

...but a rather self-defeating exercise all told.