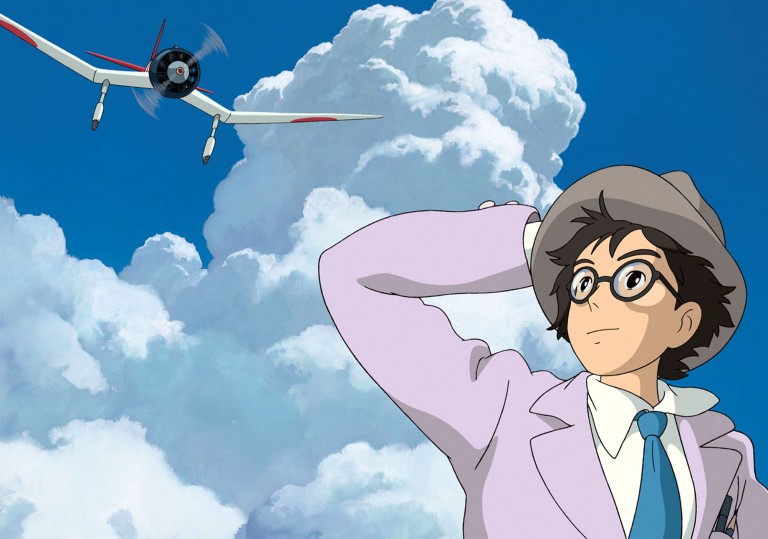 A titan of animation proffers his swansong.

Unlike any Studio Ghibli movie. Unlike any animated movie. Strange and heartbreaking.

The one that Miyazaki will be remembered for.

The concept of taking flight, of casually defying the sorry lot of the human land-lubber, is a central concern of Japanese filmmaker Hayao Miyazaki. That gossamer film which separates the realms of bustling fantasy and horrific reality is often punctured by some plucky hero (or, more often, heroine) lifting off the ground and leaving such Earthbound givens as the laws of physics in a beautifully rendered dust trail.

Animation, the creative medium in which Miyazaki operates, is fantastical by design, meaning that suspending disbelief when “human” characters take flight is far less of a push. It’s ironic, and perhaps even a little perverse, then, that the director’s purported final encore opts to literally chronicle the wondrous world of early aviation, particularly the creation of the Mitsubishi A6M Zero, which was pivotal to the Japanese fire-bombing of Pearl Harbour.

Studio Ghibli diehards may be unsure of what to do with the film, how best to categorise and compartmentalise it among a catalogue of films that all make some kind affirmative concession towards age, gender and (relatively) broad taste. Gone are the loopy, expressionist flights of fancy, the occasionally hectoring environmental sub-themes and the customary panoply of cute critters and goofy comic side-players.

In their place, though, is a melodrama so earnest, rousing and robustly built that you’d swear it had been penned by some on-the-clock huckster chain-smoking in the backrooms of a Hollywood studio circa 1940. Miyazaki has selected Jirô Horikoshi as his subject, a goggle-eyed boy wonder engineer from the pre-war era working for the then-fledgling Mitsubishi corporation and given creative free rein to invent fighter planes to rival those of Germany and the US. Yet Horikoshi’s pacifist tendencies mean that he finds it tough to hand over his designs for use in war games.

In many ways, The Wind Rises is biography as autobiography, telling of the triumphs and traumas of Horikoshi’s young life as much as it does the director’s own, much publicised feelings about his chosen metier. Horikoshi’s aviation idol, Count Giovanni Caproni, assures him during a number of markedly restrained fantasy sequences that, “Airplanes are dreams” – could the same not be said of cinema, with the two men tasked with producing a product that’s ideologically rooted in the realms of fantasy?

Both men are also prone to biomorphing – that is taking the simple, sturdy designs offered up by nature and co-opting them as inspiration to execute their craft: Horikoshi bases his wing ribs on the dainty curve of the mackerel bone; Miyazaki, for example, uses samples of human voices for all of the film’s sound effects (propellers, trains, an earthquake, etc).

Though The Wind Rises would arguably fall into the bracket of the traditional biopic, it’s interesting by dint of it being a formal conceit never before adopted by the Ghibli stable. And yes, it does adhere to conventional story arcs and reaches a somewhat predictable conclusion, yet Miyazaki stands at a valuable distance from his subject, never second guessing his intellectual development and never overplaying his lengthy bouts of sadness and confusion.

Satisfyingly, for a film about an inventor, there’s a noticeable dearth of “eureka!” moments, where circumstances handily conspire to move the plot forward. Instead, this comes across as a dramatically unadorned take on Horikoshi’s life, a saga that works as a collection of episodes and imperative moments and that steers thankfully clear of contrivance – something that Miyazaki the writer has, in the past, not always been capable of.

The Wind Rises stands alongside Grave of the Fireflies as one of Ghibli’s most adult-oriented works. Though it’s choreographed with all the priggish whimsy of a pre-code romance, it even offers up the studio’s first bona fide sex scene. Still, it’s doubtful that ankle-biters will get very much at all from the film, unless they’re ankle-biters with a fixation on cross versus flat-head screws or the mechanical minutiae of wing struts.

With its abrupt downer ending, the film finally reveals its concealed sense of morbid curiosity, juxtaposing the mass destruction of Horikoshi’s gliding dream machines with the natural, very sad disintegration of the human body. On deeper reflection, this is perhaps a film which – like all great works of art – strives to embed its themes so deep within the text that, to some, they might appear invisible. More than a film about one man’s mystification as to how creativity can directly equate to violence, the overarching philosophical intimations suggest a work which highlights the unseen knock-on devastation that comes from any and all acts of nobility.

A titan of animation proffers his swansong.

Unlike any Studio Ghibli movie. Unlike any animated movie. Strange and heartbreaking.

The one that Miyazaki will be remembered for.