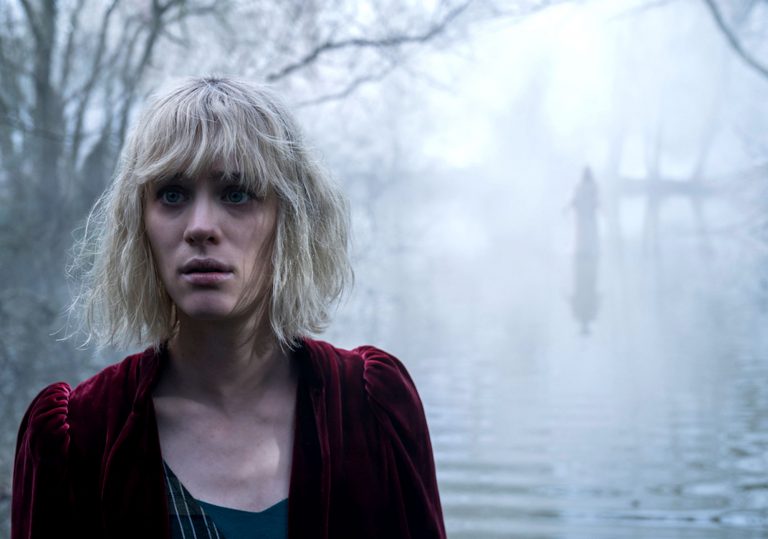 Uncanny confusion of the supernatural and the psychological.

Well worth waiting for the disorienting end to creep up on you.

Floria Sigismondi’s long-delayed update of ‘The Turn of the Screw’ finally surfaces – was the wait worth it?

“This can’t be real,” exclaims Kate (Mackenzie Davis) as she enters the vast Fairchild estate (supposedly somewhere coastal in the US, but in fact Killruddery House in County Wicklow, Ireland) where she has been hired as live-in governess for young, orphaned Flora (Brooklynn Prince).

Indeed, with its outdoor labyrinth, its deathly silent corridors, its forbidden wing and its creepy basement, this place seems to belong as much to the imaginative world of the gothic genre as to any kind of reality. In these hallways, festooned with dolls, portraits, mannequins, statues and other simulacra of the living, as well as with ubiquitous mirrors to catch details that the eye misses, it is easy, as the long-serving Mrs Grose (Barbara Marten) points out to Kate when she first arrives, to ‘get lost’.

The most immediate reference point here is Henry James’ 1989 novella ‘The Turn of the Screw’, which was also the inspiration for Jack Clayton’s The Innocents, Michael Winner’s prequel The Nightcomers and most recently William Lima Jr’s Through the Shadow. From James’ work, writers (and twin brothers) Chad and Carey W Hayes have expressly adapted their screenplay and appropriated the names of all their characters.

Yet if the title ‘The Turning’ points as much to a deviation from source as to the source itself, the story has indeed been considerably updated. Kate may joke that she has not been a live-in governess “since the 1880s”, but in fact the film takes place in 1994 (news of Kurt Cobain’s death is heard in the background). Kate, like her predecessor Miss Jessel (Denna Thomsen), drives a car, the gates to the estate open electronically, and Flora’s older, more menacing brother Miles (Finn Wolfhard) noodles on an electric guitar.

Yet despite all these signifiers of change and modernity, the past keeps finding a way to impose its ghostly influence on the present. Much as Kate wins over Flora by pointing to the sense of childhood loss that, for all their other differences, they share, and teaching her young ward to put on a “brave face” as a mask against life’s pressures, the histories of these two women returns to haunt them and to send their conjoined narrative down divergent paths.

As buried secrets rise to the surface, as Kate finds she can no longer trust even what she sees in the mirror, as identities and influences blur, and as the confines of the estate prove difficult – perhaps impossible – to escape, The Turning differs from James’ original story. But it stays true to the spirit of the novella’s notoriously sustained ambiguities, ultimately leaving the viewer, along with Kate, utterly lost.

The film, too, has long been stuck in limbo. It began in 2016 under the title Haunted, as a passion production for Steven Spielberg, with Juan Carlos Fresnadillo set to direct. But, $5 million into its development, the whole process was restarted and the title altered to The Turning, with a new cast attached and acclaimed music video director Floria Sigismondi, who previously made the Joan Jett biopic The Runaways, now at the helm. The finished film was scheduled for an early 2019 release, then shelved for a year.

The reason for this delay may forever remain a mystery, but perhaps there is an uneasiness among distributors about releasing horror cinema that fails to explicitly resolve its heady confusion of the supernatural and the psychological. Sigismondi’s film has all the rich, spooky atmosphere and shadow play – all the hide-and seek and impossible apparitions – of a well-turned ghost story. But the possibility that it may not even be one will represent the biggest challenge for viewers inclined to want to pin down the object of their errant desire.

The slippery, liquid spaces of equivocation, however, will always be where the uncanny is best realised. And while The Turning does not exactly reinvent the creepy wheel, it certainly gives another turn of the screw to James’ unsettling tale, while reflecting upon its themes of transference and projection through a glass darkly.

Uncanny confusion of the supernatural and the psychological.

Well worth waiting for the disorienting end to creep up on you.