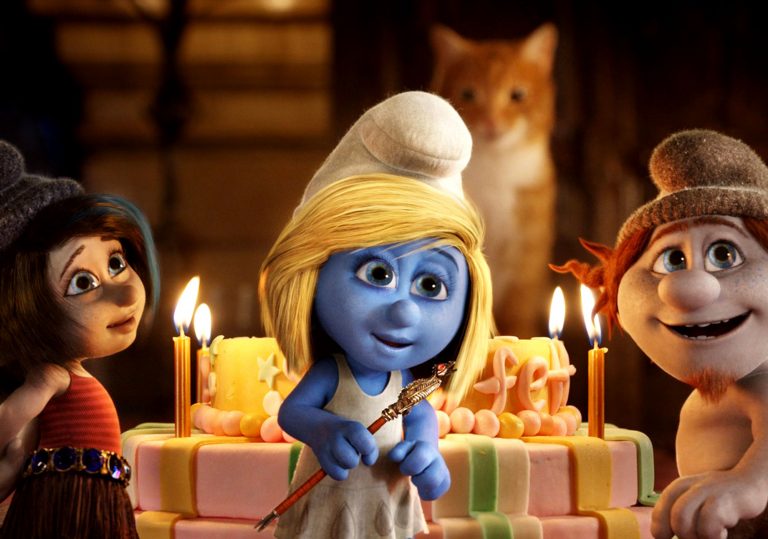 The first one wasn’t the all-consuming baptism of hellfire that was expected.

But this one is. No fun whatsoever.

It sure is fun to apply wacky theories to. So marks for that.

The obvious (lazy) reading of both of the Smurfs films (for they are nearly identical) is that they are stories driven by the consumption of and desire for illegal substances and herbal highs. In the same way that British tea-time classic The Magic Roundabout was little more than a vast network of thinly veiled acid trip references, The Smurfs too sees a bunch of blue-skinned munchkins living in colourful toadstools and ingesting magic Smurf rocks which take them through an inter-dimensional portal to a luxury apartment in downtown Manhattan. Evil Eastern European wizard, Gargamel (Hank Azaria), also has a craven desire to extract essence of Smurf in order to give him the power to take over the world. It even makes his wand get bigger, so there are self esteem-enhancing side effects too.

2. The joys of social networking

In Smurfs 2, Gargamel is introduced as an international celebrity and one of the world’s foremost illusionists. He is even enjoying a residency at Paris’ famous Opéra. How did he get to this point? How does anyone get anywhere these days? By getting a million hits on YouTube, of course. The popularity of online videos and their function as an instantaneous ticket to success is killing the art of the cinematic montage. Concocting the reasons why a character’s fortunes have changed radically since we last saw them is an open goal for boundless creativity. A popular YouTube video is a cop out. Elsewhere, there are handy reminders throughout the film to make sure you update your Facebook/Smurfbook status in order to keep your braying fans amused.

Conservative parents may want to shield their eyes (and the sensitive eyes of their little’uns) from certain moments in the apparently liberal-minded Smurfs 2, as it presents Smurfette’s sudden estrangement from her all-male compatriots as a quasi-erotic odyssey in the City of Lights. Much of the plot is taken up by Vexy, a grey-skinned Smurf manufactured by Gargamel (who, incidentally, dresses up like a Portlandia bake shop proprietress replete with beanie hat and blue streak in her hair) trying to woo Smurfette over to the dark side. She constantly yaps about how much fun it is to be “naughty”. When Smurfette eventually succumbs to Vexy’s coquettish come-ons, the pair eventually embrace. The gong-bonging hippy-father, Papa Smurf, eventually blesses their union.

A stretch this, but a film about characters in a desperate search of changing the colour of their skin is always a little suspect. The grey-skinned Vexy and her mentally defective compadre, Hackus (who, again, looks like he’s been chewed up and spat out by the Haight-Asbury set circa 1975), are at the mercy of Gargamel and his tincture of magical essence. It’s Gargamel’s goal to locate the magic formula thereby turning his runtish grey Smurfs into power-giving blue Smurfs. In short, Gargamel is Hitler.

5. The joy of sweets

There seems to be a clause within the Smurfs franchise handbook which states that there has to be a scene in which the Smurfs get to run around/smash up a sweet shop. It happened in the first one, allowing many fine candy products to get their names in front of the eyes of the film’s sugar-hungry audiences. The exact same thing happens here. Bizarrely, one of the products which gets a handy name check is Tic-Tacs. Yeah, cos that’s what the toddlers are all scoffing these days…

6. Learning to love the working classes

In a rather bizarre subplot, terminally flustered father and friend to the Smurfs, Patrick (Neil Patrick Harris), spends much of the film denying his familial heritage by rejecting his connection to his stepfather, The Corn Dog King (sic), played by Brendan Gleeson in a cream linen suit and kipper tie. Patrick clearly has certain problems with his wipe-clean, contemporary, organic, gluten free, all-natural New York lifestyle, but is utterly sickened by his boorish, Irish father and his junk food empire. The lessons of eternal love and friendship as preached by the Smurfs (plus the ordeal of Gleeson getting temporarily transformed into a duck) help them in the end to leap over that sickening corn dog barricade and bridge the class chasm between them.

7. The pleasures of rural life

Though both of the Smurfs films highlight the superficial pleasures of life in the big city (they have sweet shops!), these are stories about returning to a life of backwards rural solitude as swiftly and cleanly as possible. In many ways, the Smurfs have something of an isolationist streak to them, as they only ever seem to mingle with their own kind within the confines of their tiny toadstool village. There’s something of a Wizard of Oz lesson here: we may have basked in the bright lights of a fairytale land, but we must never forget the horrendous, diseased dust farm where we came from.

Or it could be a bunch of stuff happening for kids. People fall over, songs are sung and love eventually finds a way. Yeah, that’s probably it.

The first one wasn’t the all-consuming baptism of hellfire that was expected.

But this one is. No fun whatsoever.

It sure is fun to apply wacky theories to. So marks for that. 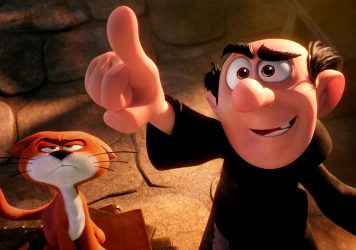