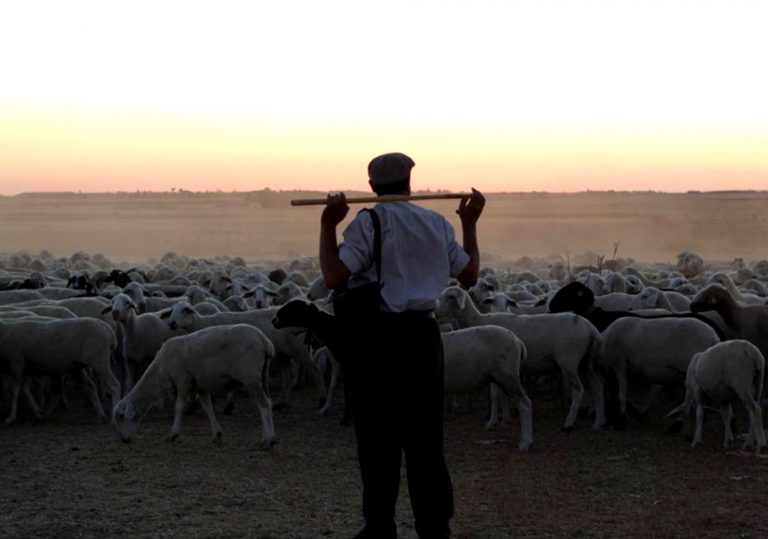 Jonathan Cenzual Burley’s low-key third feature is a neo-noir about a shepherd fighting for his land and livestock.

A carefully paced and compelling central performance, capable of carrying the film through its few weaker moments.

A poignant and expertly restrained meditation on greed and financial hardship in rural Spain.

The common man takes on big business in this slowburn plea to preserve our breathtaking natural landscapes.

A field in Castile stretches out under a grey sky, the scene spoiled by a never-ending string of phone lines. A crooked house sits under a blanket of clouds as a lone Shepherd walks along the road towards his home. He stops at a billboard advertising a housing complex soon to be built on his land. “Shameless bastards,” he mutters under his breath, before dousing it in gasoline and setting it ablaze.

Jonathan Cenzual Burley’s third feature film, The Shepherd, pits a humble shepherd against Espanax, the construction firm vying for acquisition of his land to use for a commercial development project. In a quiet tale of humility and defiance, Burley expertly captures the financial and generational tensions of a nation in recession.

There is an intimacy to watching the film’s eponymous Anselmo (Miguel Martín) command his vast expanse of land, completely alone, save for the company of his sheepdog, Pillo. Martín offers an honest, rugged central performance, proving capable of conveying emotion with slight gestures and measured silences. Anselmo is a simple, charming man, passing his time drinking wine, tending to his sheep and flirting awkwardly with the local librarian.

Burley transforms the dusty Salamanca landscape into an isolated paradise, constructing Anselmo’s life from the muted blue of his kitchen walls to the brilliant scarlet sun setting over his farm. With his atmospheric original score, Tim Walters succeeds in building immense tension in the absence of overt drama. Sheep move fluidly across Anselmo’s field, filling the entire frame as the bells hanging from their necks clang quietly. The score chimes low and steady overhead. The world conjured is a remarkably peaceful one, and the filmmakers endorse its simplicity wholeheartedly.

El Pastor’s strength lies in its ability to inject drama and complex moral considerations into simple shots and uncomplicated stories. Drama is heightened during the film’s second half as the storybook villains Paco (Juan Luis Sara) and Concha (Alfonso Mendiguchía) threaten to disrupt Anselmo’s tranquil existence. Burley builds to a slow crescendo towards the film’s final sequence, so that when Anselmo’s leaves his house to confront the developers for the last time, it feels less like walking outside, and more like walking into battle.

In a final twist certain to subvert expectations, Burley succeeds in creating a visual metaphor for the harsh repercussions of greed and self-service, sure to stay with you long after it’s left the screen.

Jonathan Cenzual Burley’s low-key third feature is a neo-noir about a shepherd fighting for his land and livestock.

A carefully paced and compelling central performance, capable of carrying the film through its few weaker moments.

A poignant and expertly restrained meditation on greed and financial hardship in rural Spain.