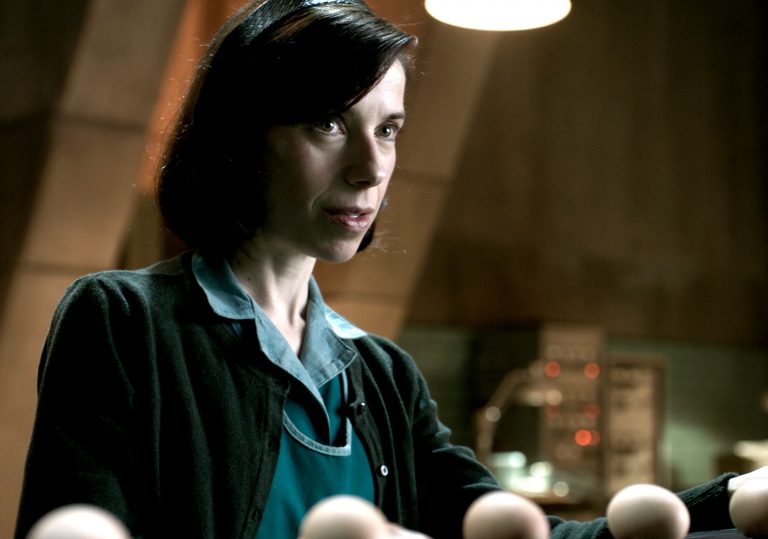 That trailer looks beautiful, but what are we getting?

A transcendent love story and timeless hymn to tolerance.

In a promotional interview for The Shape of Water, director Guillermo del Toro expressed his regret at having turned down an opportunity some 10 years ago to oversee the resurrection of Universal’s monster movie series. The franchise, as is the way of these things, moved ahead without
him. It was rebranded the ‘Dark Universe,’ only to implode at launch with the release of The Mummy in 2017. Despite the presence of Tom Cruise as their space chimp, the studio’s $125m experiment in Marvel-bothering was summarily pronounced DOA.

Audiences can count themselves lucky that del Toro chose to forge his own path, away from the enforced strictures of an inherited property. The decision left this singular filmmaker free to engineer a dark universe of his own design – a new world of gods and monsters, if you will? – of which The Shape of Water is the crowning summation.

The spirit of those early Universal pictures has long inflected del Toro’s work. The wells of humanity of James Whale’s Frankenstein; the empathy of its sequel, Bride of Frankenstein; the sexual fascination of Jack Arnold’s Creature from the Black Lagoon or, more explicitly, its follow-up, Revenge of the Creature. These all find their way into del Toro’s latest, an effortless synthesis of influences. Yet The Shape of Water is no postmodern duck shoot of cultural signifiers. It’s a fairy tale steeped in tradition. A film that could only exist with a century of cinema behind it, and could only be masterminded by del Toro.

In the same way the Brothers Grimm codified a millennium of European folklore on the page, del Toro draws from the well of the 20th century’s pre-eminent means of self-mythologising; those movies pregnant with fantasy and fear, permeating his work like the smell of toasted cocoa, which one character here describes as, “Tragedy and delight, hand in hand.” This cross-pollination of genre is nothing short of remarkable. The blindsiding tonal shifts signal that we are clearly in the hands of a master.

The world of The Shape of Water is a movie world. One where its protagonists work in a secret government facility that hosts experiments on mysterious creatures snatched from the depths of South America. It’s a place where our heroine lives above a dilapidated revival cinema which screens double features of biblical epics and swiftly forgotten musicals. Here, a mute cleaning lady can fall in love with a god.

Just like Grimms’ fairy tales, mid-century sci-fi and fantasy proved inherently political. The year is 1962, but it is also today. Against a backdrop of the civil rights movement and space race paranoia, a group of social outcasts come together to save a kindred soul – an amphibian man known as “The Asset” – from government autopsy. While the Hellboy films saw del Toro’s rough-and-tumble misfits seemingly plucked from a late Howard Hawks film, The Shape of Water draws its world-beaten underdogs as emissaries of humanity. 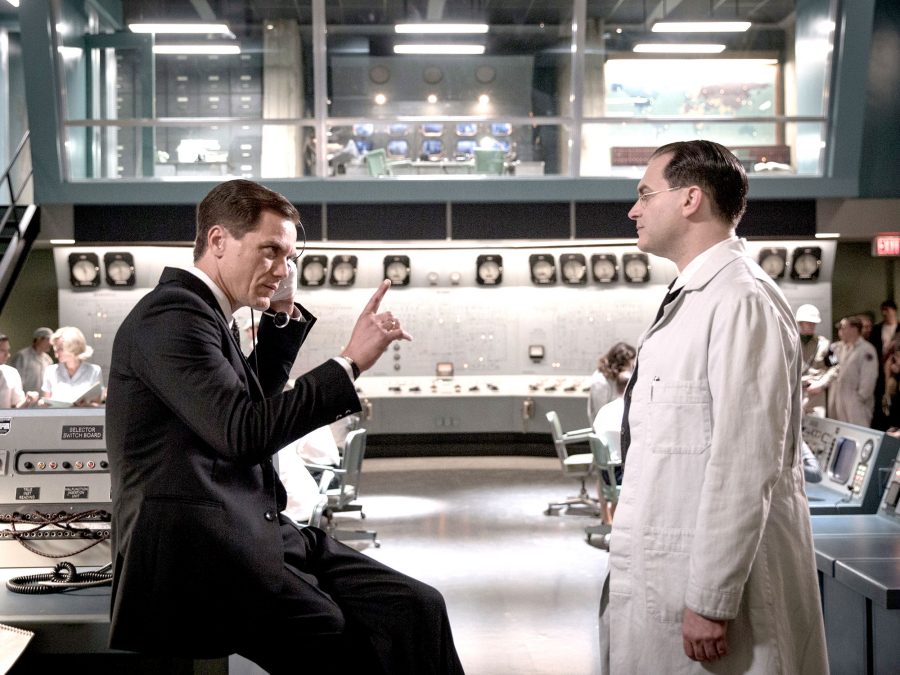 It’s no coincidence that the headline feature at the cinema over which the “princess without voice” lives is Henry Koster’s The Story of Ruth, a largely forgotten melodrama that posits love as the reward for kindness in the face of extreme prejudice. An extraordinary Sally Hawkins is Elisa, an orphan discovered by the banks of a river, her neck scarred from the removal of her larynx as a child. Her neighbour is Giles (Richard Jenkins), an alcoholic artist, struggling to hold on to a gig painting Rockwellian jello ads.

Elisa and Giles pass their evenings in front of his television, switching away from the violence of the news that sees black protesters attacked with German Shepherds (and a familiar cattle prod) for the escapist fare of golden age musicals. They tap their feet along to Betty Grable numbers. They marvel at another mismatched couple as Bojangles and Shirley Temple perform The Little Colonel’s stair dance. They take Alice Faye’s poignant rendition of “You’ll Never Know” to heart. Harsh reality and Hollywood daydreams are boxed-in on Giles’ flickering set. Soon they will manifest in the couple’s lives, the latter primed to explode in a transcendent third act coup de cinéma.

That old Hollywood magic finds a vessel in the love story between Eliza and the amphibian man, who is magnificently portrayed by Doug Jones. Superficial design similarities warrant the comparison to his role as shy help-meet Abe Sapien in Hellboy, but this is a more sophisticated and detailed performance. The simultaneous animalism and humanity – the love and longing he expresses through the CGI-assisted suit – never cease to amaze. 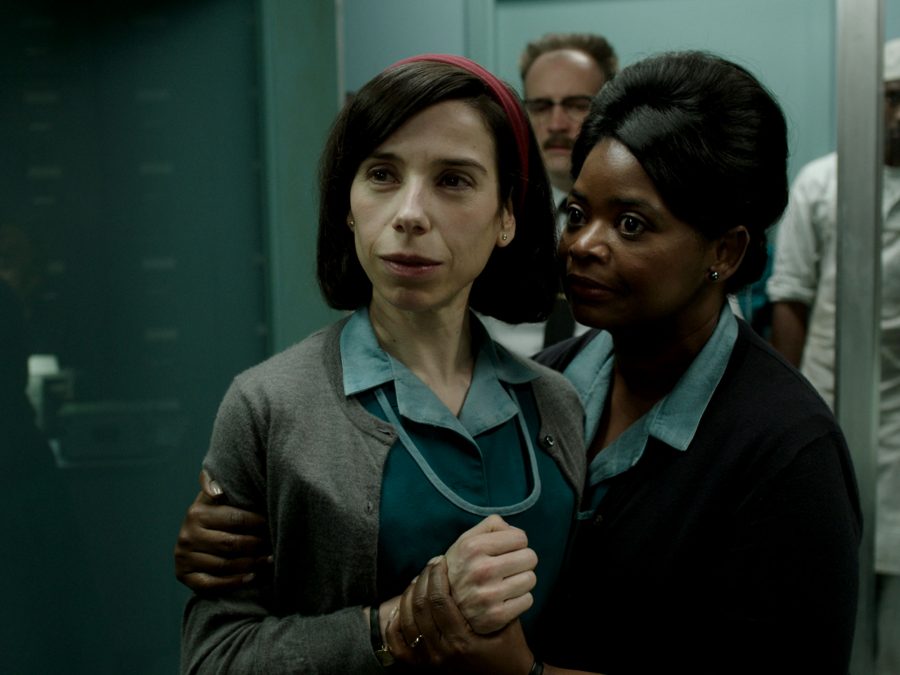 Elsewhere, a focus-pull reveals two raindrops chasing each other as Madeleine Peyroux sings ‘La Javanaise’. A room filled with water becomes the site of a sexual tryst. Del Toro brings such swoon-inducing romanticism to their hesitant courtship that it’s hard to hesitate for a second in accepting the interspecies coupling. Which is both film and filmmaker’s point: the unconditional championing of the ‘other.’

As Dan Laustsen’s fluid camera eddies and glides through scenes, del Toro brings his peerless mastery of colour to bear. When Giles presents his artwork to his old boss, the red jello just won’t do. “They want green now. It’s the future.” Green – the dominant colour in Elisa’s apartment – is the future. “I’m not so sure about the green,” says Michael Shannon’s villain-in-chief, Strickland, when out to buy a new Cadillac. “Not green, my friend… teal,” says the car dealer in return. Teal – almost, but not quite green – is the colour of the government facility, the workplace where, “Decency is a commodity we don’t use, so we export it.” It is a time and a place on the cusp of the future, a colour on the cusp of green. It’s unlike the vividly-hued green sweets Strickland permanently sucks on, the ones that can’t abate his sickness, his necrosis. The man that isn’t so sure of his place in the future, isn’t so sure about the green.

In an era of subservience and false fronts, where even a racist pie seller has to put on a fake accent to get by, del Toro finds grace, love and even a halting measure of self-acceptance for world weary “relic” Giles. To these social pariahs del Toro affords an unqualified dignity. Buried deep in the closing credits is an acknowledgement of the work of the 12th Century Muslim poet, Hakim Sanai, who is perhaps responsible for the film’s closing words. That Sufi spiritualism should inform The Shape of Water’s message of love and tolerance (in opposition to Strickland’s twisted biblical appropriations) comes as little surprise given its director’s wide pool of influences.

Del Toro relinquished the chance to offer his take on the Universal monster movie franchise he clearly loves so much. Yet by the end of his exquisite new film, it’s hard not to recall the words intoned by a blind hermit to the monster in the gothic classic, Bride of Frankenstein: “You’re welcome, my friend, whoever you are.”

That trailer looks beautiful, but what are we getting?

A transcendent love story and timeless hymn to tolerance.