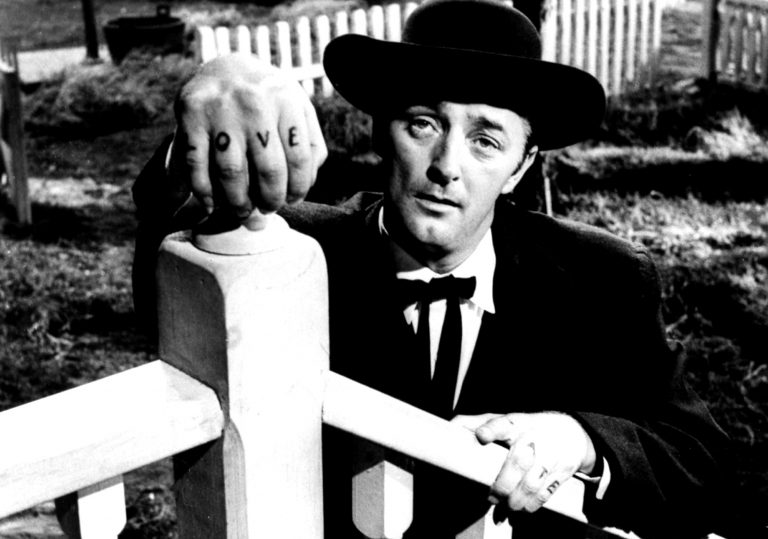 Laughton is a canonical auteur solely on the strength of his only directing credit.

Few films since have proved so widely iconic and influential.

Even within the shoot-them-into-outer-space-to-paint-a-flattering-picture-of-humanity-for-alien-civilisations subset of movie masterpieces, The Night of the Hunter is unique. It is not a film noir, though it stars Robert Mitchum as a psychopathic killer on the trail of stolen money, and is shot in a style inspired by German Expressionism; nor is it a silent film, though it opens and closes on moral centre Lillian Gish in direct-address. It is both Christian parable and folk tale, with its hymns, homilies, and orphans carried to safety by nature’s benevolence; but it is also grounded in the social concerns of its makers.

Davis Grubb, author of the source novel, was a boy in Moundsville, West Virginia when the lonelyhearts killer Harry Powers was hanged at prison there in 1932. Around that time, a Grubb family friend was radio evangelist William Stidger, a leading figure of the Great Depression’s revival movement, wherein emergent mass media and acute need bred a new strain of American demagogue. (Stidger was a model for Sinclair Lewis’s Elmer Gantry.) Here, Mitchum is Preacher Harry Powell, a hammy huckster and serial widow-murderer.

Playing on small-town shame, he insinuates himself into the family of Willa Harper (Shelley Winters, sympathetically histrionic for once) after husband Ben is executed, so as to pry the secret of his hidden loot from the children, John and Pearl. (Threatening violence and dangling affirmation, he’s at once a cartoon demon and a terrifying metaphor for domestic abuse.) Whenever Mitchum sings ‘Leaning on the Everlasting Arms’, in his sleepy, sultry baritone, it is not merely sinister, but perversely ironic, and in a familiar way.

What gives The Night of the Hunter heft as an indictment of American religious hypocrisy, is that it is one of the most spiritual films ever made. The Coen brothers, who recreated DP Stanley Cortez’s stunning underwater shot of Winters in The Man Who Wasn’t There, and used ‘Leaning on the Everlasting Arms’ in True Grit, also nodded to inexorable Harry Powell (“Don’t he never sleep?”) with No Country for Old Men’s own pursuing Fury. But while most films purportedly about “evil” are actually about other, more worldly concerns, The Night of the Hunter is animated with the belief that, as gospel’s Louvin Brothers sang, ‘Satan is Real’. Its struggle is not between culture and anarchy, but between, well, remember the little story of right hand/left hand? Every element is scaled to the context from which good and evil originate.

With Cortez, director Charles Laughton creates a Carpenter Gothic aesthetic of baroque shadows on bare walls, the soundstage starkness offset by enveloping pastoral imagery in the outdoor sequences. The compositions have the fable-like profundity of Gish’s performance, as the good shepherdess who takes in John and Pearl when they flee downriver. Laughton worked with James Agee on the screenplay, which shares a documentary-poetic openness with Agee’s other treatments of Depression-era poverty and fatherless Southern families.

From its guileless exposition and comically life-drawn Americana, to its Scripture quotations and sensitivity to a child’s perspective, the film proceeds with a simplicity of inexhaustible depth.

Laughton is a canonical auteur solely on the strength of his only directing credit.

Few films since have proved so widely iconic and influential. 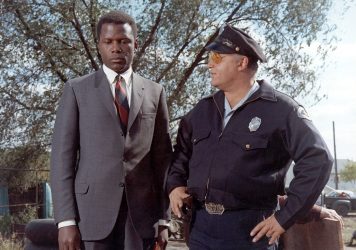