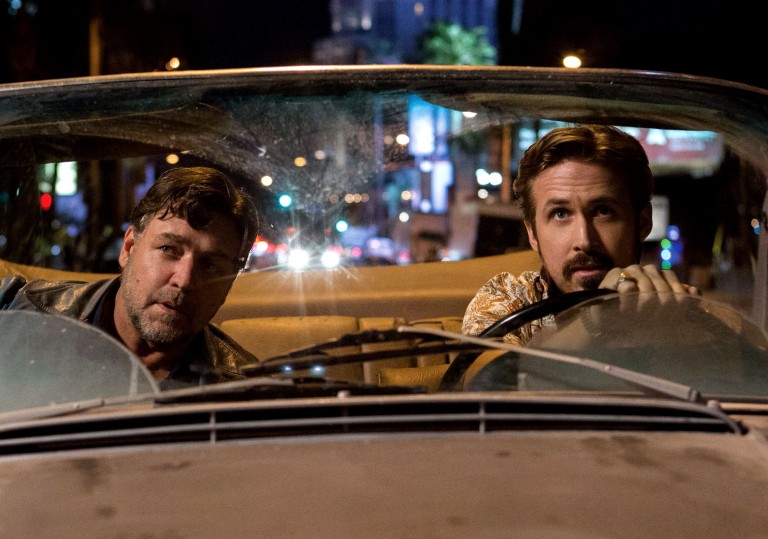 Once you go Black...

A defiantly old-school action comedy that delivers big where it really counts.

Joy is watching Ryan Gosling roll backwards down a hill in the dark. In Shane Black’s rollicking rough-and-tumble buddy movie, the characteristically unflappable Canadian star is required to take a spill multiple times, always at precisely the most inopportune – and thus hilarious – moment. He also barfs, bickers, shrieks, swears, weeps and falls down some more in a demanding physical comedy role that sees him give ’90s Jim Carrey a run for his money. But more of that later.

You often hear actors, when questioned on their reasons for committing to a given project, reel off the same pat answer about how it’s all about the script. Well, this one by Black and Anthony Bagarozzi (who’s on co-screenwriting duties for Black’s upcoming Doc Savage, as well as Adam Wingard’s Death Note) really is a doozy. Fast, funky and furiously entertaining, this is the sort of down and dirty picture you can imagine top-ranking studio execs frothing over back when Hollywood still produced smaller, genuinely subversive movies for mainstream audiences. You know, back when “rebooting” meant switching your Commodore 64 off and on and the wall and comic book movies invariably contained more Spandex than CGI.

It’s not just the costumes, the scuzzy ’70s setting, the flawless soul-and-disco soundtrack; in the best possible way The Nice Guys actually feels like it belongs in a different era. Gosling’s eyeballs must have jumped out of their sockets – Tex Avery style – when the script landed in his in-tray. There’s just so much good stuff here, including but not limited to: method acting eco warriors, a blue-faced assassin, Kim Basinger, several stacks of shot-up corpses, two coy mermaids and a giant talking bee.

As ever with Black’s films, the journey is more important than the destination. The plot slams into gear when an actress known for cheap bongo flicks (under an alliterated, innuendo-laden alias, naturally) turns up dead in suburban Los Angeles, apparently the victim of a freak car accident. On the case are Jackson Healy (Russell Crowe) and Holland March (Gosling), a pair of low-rent private detectives who decide to team up when it transpires that the pornstar is in some way connected to an elusive young woman named Amelia (Margaret Qualley). From here things get progressively stranger and stickier for our seasoned antiheroes, and they quickly come to realise that solving the “crime of the century” is going to be about as straightforward as shooting invisible fish in a bottomless barrel.

Just as he did with the Lethal Weapon series and his 2005 directorial debut, Kiss Kiss Bang Bang, Black exploits his film’s mismatched central dynamic to full comic and dramatic effect. Dry quips and put-downs abound. Occasionally Healy and March come to blows. In truth their constant sparring is by turns endearing and exhausting. Yet while the jokey camaraderie hits its mark for the most part – with Crowe at his bristly best and Gosling pinballing about the place with palpable relish – the film would simply fall apart were it not for the grounding presence of another character.

Quite unexpectedly, it’s relative newcomer Angourie Rice as March’s intrepid daughter, Holly, who steals the show. Not only is she charming and very funny, but her comparative maturity reveals something almost tragic about these hopelessly antiquated masculine archetypes. We laugh both at and with them and roll our eyes when their ineptitude leads to farcical scenarios, but, crucially, we empathise with them too.

Once you go Black...

A defiantly old-school action comedy that delivers big where it really counts. 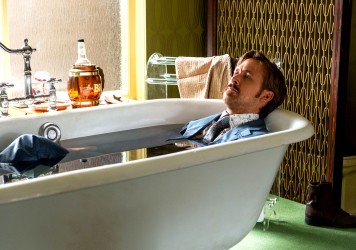 With The Nice Guys the Canadian star shows he’s a comedy performer worth taking seriously.