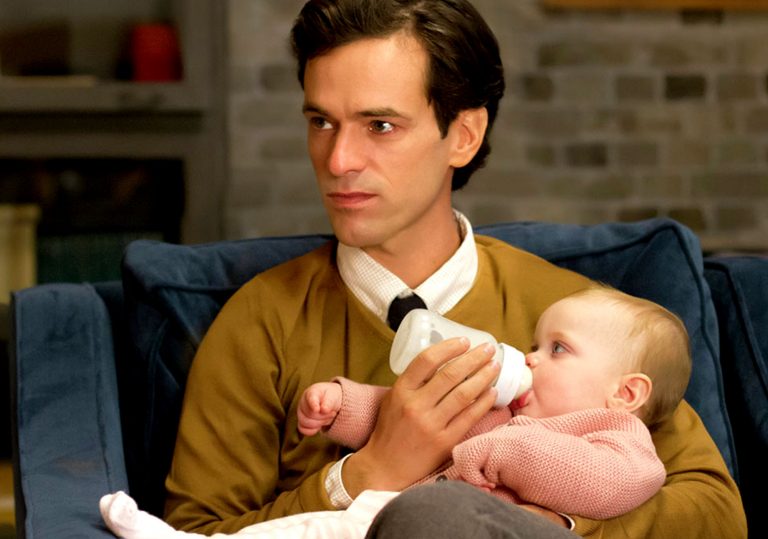 Two career-highs on the trot – can François Ozon make it three?

As it careens from sexual brinksmanship to farcical melodrama, it’s hard not to get swept up in the proceedings.

The elaborate narrative hijinks are prone to dilute the more tantalising elements.

The best films by François Ozon fall into two distinct categories: there are the arch deconstructions of dramatic forms, and the heady, unrestrained visions of human sexuality. His last two works serve as the purest expressions of these ideals. 2013’s In the House appropriated the Hitchcock arsenal to subvert narrative artifice, while Young and Beautiful found the director revelling in the uncouth salaciousness of his Sadean heroine. The New Girlfriend falls somewhere in between, but still finds Ozon self-consciously sabotaging middlebrow sensibilities from within.

The film charts the relationship between Claire (Anaïs Demoustier) and her best friend’s widower, David (Romain Duris). The connection initially forged in mourning is immediately complicated when it transpires that David has taken to privately dressing in his deceased wife’s clothes. What begins as a curious manifestation of grief develops into a co-dependent necrophiliac fantasy in which Claire becomes increasingly complicit. In a letter to the writer Richard Elman, the late David Foster Wallace wrote that “every love story is a ghost story”. This gorgeously elusive phrase hovers over the events of The New Girlfriend, albeit filtered through Ozon’s typically gaudy sensibility that, at best, operates as exaggerated melodrama and, at worst, as over-egged soap opera.

The New Girlfriend yields riches as it shifts away from the outlandish comic possibilities of its premise towards the idea of sexuality as something that’s malleable. David’s new persona “Virginia” is a vessel for the pair’s unspoken desires, whether that’s long suppressed perversity or personal sexual identity. The manicured bourgeois façade begins to crumble as the potential of Virginia becomes apparent. Her enigmatic purpose is the symbolic heart of the picture; she is an expression of David’s id, a catalyst of illicit attraction as well as the reincarnation of a lost love.

The ambiguity is at once tantalising and frustrating. We will Ozon to transcend the shadier boundaries which he skirts, but realise that the delicate balance he maintains may be lost at that moment of coalescence. In Ozon’s films, moneyed Parisian society is an elaborately constructed stage conducive to his devilish machinations. His camera is a proscenium into this glossy world of pose and appearance, the characters are helpless fools beholden to his master’s voice. They build their own prisons in which social mores are strictures to be transgressed, usually through some form of kink.

In The New Girlfriend, an unshakeable bond between two women is cast as something that erodes the two family units that were specifically contrived to deflect the furtive undertones of that connection. Indeed, the film’s primary thematic drive comes sharply into focus when Ozon is undistracted from this central tension. Though he’s occasionally too content to adopt the very dramatic contraptions that he’s capable of subverting so brilliantly elsewhere, The New Girlfriend is still an alluring, sharp-witted picture.

Two career-highs on the trot – can François Ozon make it three?

As it careens from sexual brinksmanship to farcical melodrama, it’s hard not to get swept up in the proceedings.

The elaborate narrative hijinks are prone to dilute the more tantalising elements.