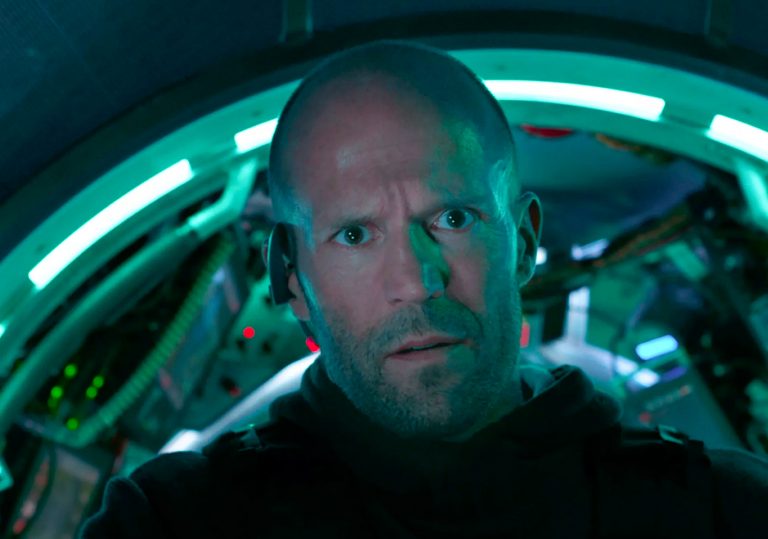 Who doesn’t want to see the Stath wrestle a giant shark?

No guts, no glory.

Jason Statham squares off against a prehistoric behemoth in Jon Turteltaub’s silly and overcomplicated thriller.

Scientists have suggested that as much as 95 per cent of the world’s oceans remain unexplored. For decades we’ve turned to the stars for signs of unchartered life rather than the seabed, and as such, the limitless potential for beasts of the deep has inspired luminaries such as Hermann Melville, Guillermo del Toro, and er, Anthony C Ferrante to create their own mythology. The chief villain among these aquatic adversaries? Big. Fucking. Sharks.

Swimming in the wake of toothy romps like Deep Blue Sea and The Shallows – as well as inevitable point of comparison and sub-genre overlord Jaws – The Meg sees a team of scientists based in the Mariana Trench attempt to uncover the mysteries of the deep. In doing so, they accidentally unleash a 75-foot prehistoric behemoth (Meg is short for ‘Megladon’, fyi). The only man capable of stopping said shark is Jonas Taylor (Jason Statham), a gruff rescue diver exiled to Thailand following a botched mission. “I don’t dive anymore,” he grimaces when the team try and recruit him. But it doesn’t take much to change his mind.

Alongside Jonas is a motley crew of half-hearted archetypes, from tough-talking tomboy Jax (Ruby Rose) and eccentric billionaire Morris (Rainn Wilson) to plucky scientist Suyin Zhang (Li Bingbing) and her precocious eight-year-old daughter Mei (Shuya Sophia Cai). An overstuffed cast leaves characters jostling for screen time, and a romance between Jonas and Zhang ends up being amusing for all the wrong reasons, but it’s hard to blame this on the actors, who all seem to be making a valiant effort to bring something – anything! – to a particularly dry script.

Despite the potential for comedy in such a premise, the only person who seems in on the joke is Statham. He plays his character with a world-weary charm and provides most of the film’s intended laughs. Everything else about The Meg is very serious, from the delivery of asinine dialogue (“It’s already proven aggressive to boats”) to an overcomplicated plot. Yet there aren’t enough thrills and spills to elevate it into genuine thriller or pulp horror territory either – thanks to its family-friendly rating the film is even light on gore, and with no characters to root for other than Jonas, you’re left not really caring who the shark actually chomps on.

And, although Jaws proved that you don’t need to give your shark lots of screentime in order to create an effective shark movie, The Meg is stingy with its shark-on-Stath action. Dithering on whether or not it’s a comedy, thriller, or meditation on climate change, The Meg attempts to do a number of things while succeeding at very few of them. So much wasted potential leaves director John Turteltaub’s film feeling like a toothless effort, floundering in the shallows of the multiplex ocean.

Who doesn’t want to see the Stath wrestle a giant shark?

No guts, no glory.