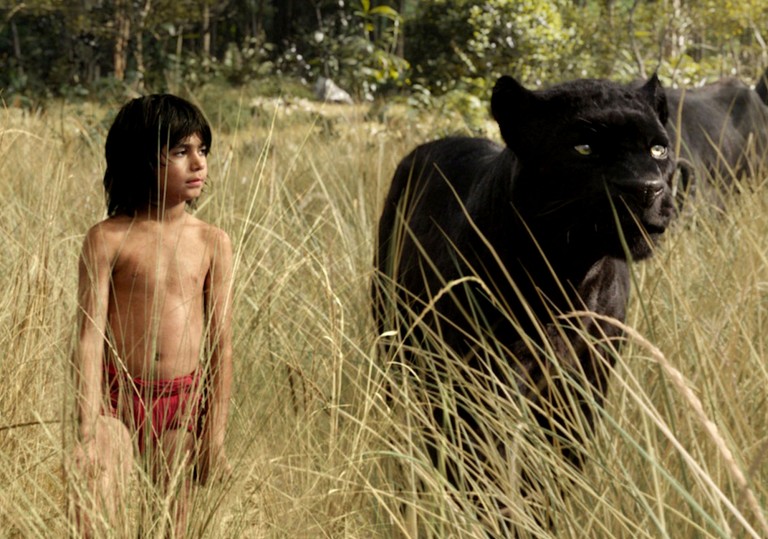 A dazzling triumph of CG animation. The songs aren’t bad either.

The storytelling is as immersive as the technology.

There’s a wonderful scene in The Jungle Book where Mowgli (Neel Sethi) bonds with a herd of elephants. In director Jon Favreau’s action-packed take on Rudyard Kipling’s fable, the scene stands out for the casual serenity it achieves. These pachyderms are not depicted as an anthropomorphised patrol of comically pompous colonials, but rather as the creators and spiritual protectors of this fragile ecosystem. In fact, they don’t utter a single word between them, instead moving solemnly through the shadows, maintaining order amid the chaos by ensuring that every creature abides by the Law of the Jungle. Well, almost.

Shere Khan the tiger is governed by his own set of codes, the combination of his innate bloodlust and fear of man’s red flower making him the most fearsome predator around. Voiced with snarling intent by Idris Elba, he’s the most sinister and dangerously charismatic Disney villain since another big cat with a sizeable chip on his shoulder and a nasty wound across his face. Khan’s sheer size makes him an imposing foe for Mowgli and the animals who swear to protect him, namely mother wolf Raksha (Lupita Nyong’o), Bagheera the panther (Ben Kingsley) and Baloo the bear (Bill Murray). What makes this Khan such an impressive specimen, however, is the stunning photorealistic detail in which he – and every other non-human character – is rendered.

Disney’s live action/CGI update of their 1967 animated feature stays true to Kipling’s fictional tale of an orphan boy raised by wolves in India’s dark heart. It’s as faithful a retelling as you’re ever likely to see, not just in pure storytelling terms but in the way it reestablishes the connection between Kipling’s characters and the Hindu folktales that inspired them. Yet although Favreau clearly has a lot of affection for Disney’s earlier adaptation, he’s smart enough to know better than to try and improve on a classic. So while ‘The Bare Necessities’ and several other crowd-pleasing elements remain, the hand painted backdrops, cartoony humour and practical magic of the original are gone, replaced by something much darker and more immersive.

To that end, perhaps the most interesting character here is the jungle itself. Peter Jackson’s Weta Digital and the UK based Moving Picture Company, the visual effects studios tasked with bringing this dense digital menagerie to life, have created a vivid, richly-textured environment that’s more spectacular than Rudyard and Walt could ever have imagined. From the tiniest insects to the tallest waterfalls, the film is alive with the colours, sounds and spirit of this ancient jungle. At its centre, a laid-back bear and a young boy drift downriver humming a familiar tune. They may be heading in the opposite direction to the man village, but we’re already home.

A dazzling triumph of CG animation. The songs aren’t bad either.

The storytelling is as immersive as the technology.