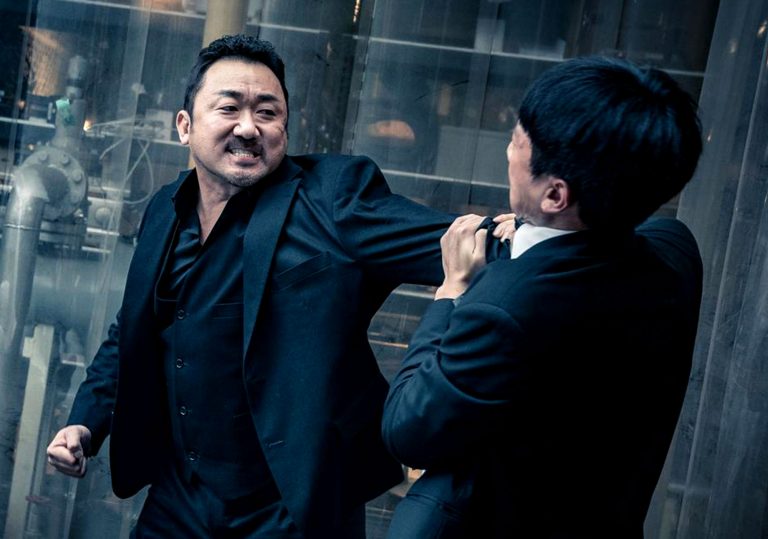 You can’t go wrong with a Korean crime thriller.

It’s 2005, and there’s a serial killer on the loose – or so believes loose-cannon detective Jung Tae-seok (Kim Moo-yeol). His superiors aren’t convinced, but Jung soon finds an unlikely partner in local mob boss Jang Dong-su (Ma Dong-seok), who survives an attempted stabbing by the mysterious murderer (Kim Sung-kyu) and is out for revenge. “I can probably catch him quicker,” declares Jang, and he’s not wrong. Compared to the hopeless cops, the gangsters have enviable resources, manpower and freedom from such things as ethics and due process. A shaky alliance is formed.

While not wildly original – Asian crime cinema has mined these uncommon team-ups and ethical ambiguities for decades – The Gangster, the Cop, the Devil pulls off its familiar twists and turns with style and verve. An expansive, electric-neon aerial shot at the start of the film places us firmly in Michael Mann territory, and the machismo of the film’s protagonists spills over into director Lee Won-tae’s amped-up aesthetic, from flashy scene transitions and montages to generous helpings of slow-mo, crunchy fight choreography and a driving rock soundtrack throughout.

The film is slick, stylish and consistently entertaining, but it would be nothing without its headline lead performances. Kim Moo-yeol has a Colgate grin and watermelon biceps, and his Jung Tae-seok likes to blow off steam by wandering into an illegal gambling den for a scrap while his partner is stuck in a traffic jam on the way to a crime scene. And even when he’s wrestling with his conscience as he shares intelligence with the bad guys ‘to catch the worse guy’, he is still powered by smarm and charm. Expect Chris Pratt to take on the role if there’s ever a Hollywood remake.

There’s no denying, though, that this is Ma Dong-seok’s film. Now familiar to international audiences after a breakout supporting role as a man-mountain soon-to-be father in the zombie horror Train to Busan, he’s the perfect fit for a one-man mobster army. He’s given many opportunities to use his hulking form to its full potential – most memorably when he launches his fist through a wooden door, to deliver a knock-out punch to the poor sod cowering on the other side – but Lee recognises his lead’s soulful, even good-natured depths. Jang Dong-su may be a violent mobster, but he has more poise than the hapless cops on the other side of the law.

Indeed, for all the tooth-pulling torture and nefarious dealings, there seems to be more camaraderie and community in the mob than there is in the bickering, bitchy and thoroughly demoralised police force. This is perhaps best captured in a small scene that might be a cheeky riff on Hayao Miyazaki’s My Neighbour Totoro, in which Ma Dong-seok’s bear-like giant offers his umbrella to a schoolgirl at a bus stop. When the detective interrupts, chastising the girl for unwittingly trusting a criminal, she declares, “You look more like a gangster than him!” Subtle? Hardly. But, as with all of The Gangster, the Cop, the Devil’s on-the-nose pleasures, it gets the job done.

You can’t go wrong with a Korean crime thriller. 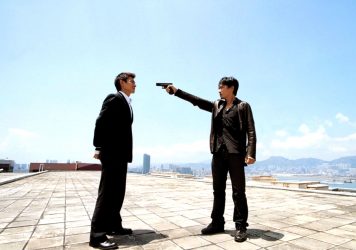 Watch: A side-by-side analysis of Infernal Affairs and The Departed