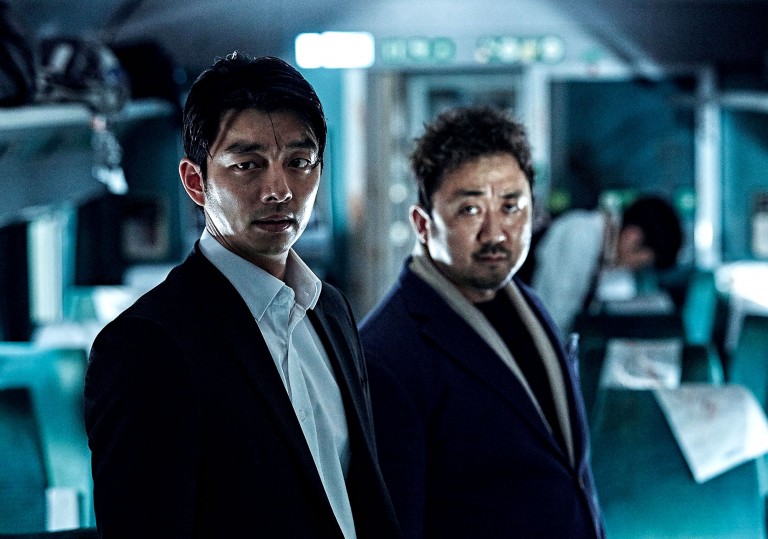 Zombies on a train is as fun as it sounds.

Funny, scary and with its heart in the right place.

Narcissistic divorced father Seok Woo (Yoo Gong) is taking his daughter, Soo-an, (a brilliant Kim Su-An) to see her mother as a birthday surprise. They’re catching the train from Seoul to Busan, unaware of a zombie outbreak that has started to rip through Korea. That is until a hungry passenger jumps on board. Once the first victim has her flesh chewed on, the film hits full pelt with very few chances to catch a breath till the finale.

What makes the zombies in Yeon Sang-ho’s Train to Busan different to the usual flesh munchers is that they don’t seem interested in tearing their victims to gory shreds. They take a little nibble and then are off on to the next person, turning everyone they bite into one of their own in seconds. This makes the speed in which the outbreak sweeps across Korea all the more believable and all the more horrifying. The zombies also only react to sound or if a person is in their line of sight involve for some creative manoeuvre, most effectively when the train passes through tunnels. Contorting their bodies, baring their teeth and sprinting through the carriages looking for their next chew toy, Yeon has created his own chilling version of the living dead.

The real core of the movie, though, lies in its well developed characters. When a bored Soo-an decides to explore the train, she comes into contact with other characters who help the story to progress. The encounters are comedic and this helps make the characters more engaging. But as the zombie attacks take place, the survivors start to reveal their true colours, showing those who only help others and those who only help themselves. Through paranoia, herd mentality and selfishness, the true villains of the film emerge.

The film does fall short at some points. Confusingly, at the beginning, when the first infected person is revealed to us, the change takes place over a long period of time. Later, when a poor stewardess meets her demise, she turns almost instantly. It doesn’t make much sense other than Yeon trying to build tension before the action kicks in. And a moment involving some news about the outbreak just feels like it’s in there to direct some blame, but it is unnecessary at the point when it’s revealed.

Train to Busan has an underlying commentary about class divisions. It shows how the elitist characters, Seok Woo and Young Suk (the type of man willing to do anything to survive), act like they have a right to decide who lives and dies to protect themselves, the former changing his ways as the film progresses. The other characters are just normal people from lower or middle class backgrounds, who see the effectiveness of working together in the face of crisis, willing to sacrifice themselves to help their loved ones as well as the strangers they’ve just met.

Zombies on a train is as fun as it sounds.

Funny, scary and with its heart in the right place.