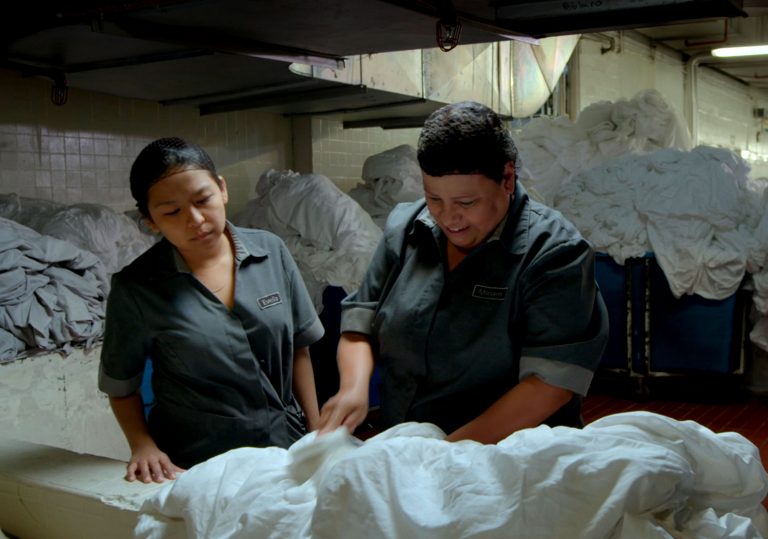 One of the low-key world cinema talking points from the 2018 Toronto Film Festival.

A cool, calm and collected film about a subject often spoken about loudly and angrily.

Maybe lacks for a killer blow, but Avilés and star Gabriela Cartol are worth keeping an eye on.

Eve dreams of the 42nd floor. As a diligent chambermaid in one of Mexico City’s plushest hotels, she keeps herself to herself, all with a view to scoring a promotion that will allow her to tidy the temporary living spaces of the monied elite. Exactingly played as an anxiety-prone wallflower by Gabriela Cartol, Eve buddies up to her unnecessarily bossy line manager, breaking her back to fulfil even the most unreasonable of demands.

There’s extra curricular activities too, as a dippy mother coerces Eve into looking after her newborn while she dashes into the shower, or there’s the strange guy who requests extra shampoo and toilet paper and just sits glaring at his laptop screen when they’re delivered.

Lila Avilés’ debut feature is a bone-dry social satire that stealthily delivers a commentary on the emotional pitfalls of low wage labour. There is a debasing quality to this type of work, and the writer/director finds a way to explore the various daily degradations without making Eve as a blank canvas for ritual humiliation.

Avilés is less interested in putting too fine a point on the upstairs/downstairs nature of the job, though she’s great when it comes to projecting the stifling geography of the building. Aside from a quick visit to the rooftop helipad, the entire film is shot inside the hotel, and even while watching you start to taste the recycled air and feel the inventible build-up of grime and sweat on Eve’s body.

Well crafted though it is, there’s a nagging sense that it’s not saying anything particularly revelatory with regard to class exploitation and the daily struggles of those toiling in the modern service industry. And there are a few scenes in the latter half where Eve’s newfound confidence plays out in what feel like uncharacteristic demonstrations of power.

Yet this is still a complete and intelligently executed work which leaves enough open for the viewer to fill in some intriguing blanks.

One of the low-key world cinema talking points from the 2018 Toronto Film Festival.

A cool, calm and collected film about a subject often spoken about loudly and angrily.

Maybe lacks for a killer blow, but Avilés and star Gabriela Cartol are worth keeping an eye on.