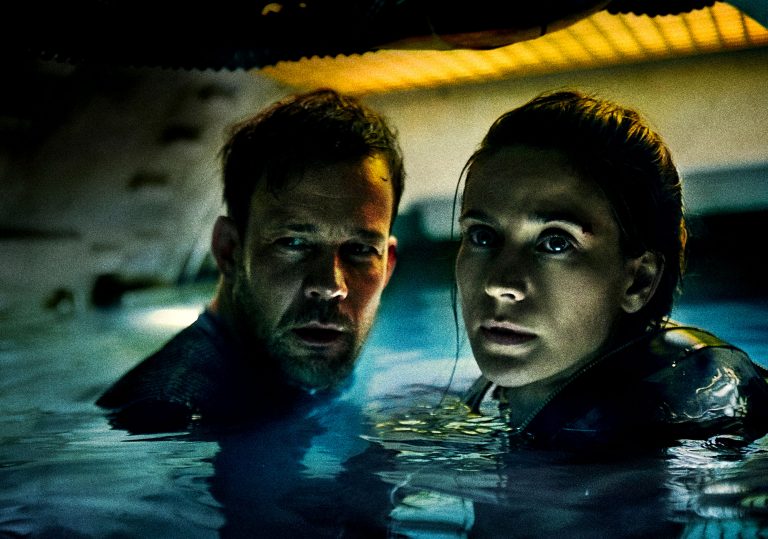 A debut feature with an interesting premise.

A film that frustrates more than it thrills.

A hostile situation on a deep sea sub off the coast of North Korea – it’s sadly not as fun as it sounds.

The world is teetering on the edge of doom. So says a montage of real-life footage that plays over the opening passages of Ben Parker’s The Chamber, highlighting the fragility of international relations. The precarious global situation even impacts a small submarine as it surveys the Yellow Sea on behalf of a private company looking to establish oil rigs in the area.

When the authority over his ship is given over to a special ops team, led by Charlotte Salt’s Edwards, with an undisclosed mission, Mats (Johannes Kuhnke) is not told who these people are or why they have taken command. This debut feature is quick to point out the wider geopolitical forces at play, but like Mats we are left in the dark over who these characters really are.

Early on the camera enters the cramped, enclosed space of the submersible, at which point the film becomes crucially dependent on the strength of the four main actors – as well as Parker’s ability to build a compelling experience from a minimalist setting. This environment immediately lends itself to high tension, as the old vessel creaks and groans in tandem with body movement. Yet despite all the monitors, gauges and switches on show, there’s never a clear sense of the physical dimensions of the craft. This becomes more of an issue later, as Parker’s over-reliance on rapid cutting takes hold.

There’s a lot of technical skill on show here. The lighting and cinematography make excellent use of the water’s visual interaction with the luminous equipment. The use of sound is also effective, with the pulsing percussive score – composed by Manic Street Preachers’ frontman James Dean Bradfield – adding energy to scenes that are otherwise lacking. The main problem is the script, which throws together familiar archetypes in repetitive cycles of artificial conflict and unearned camaraderie.

The Chamber is at its strongest when it focuses on the hopelessness of the premise, especially when it slips deeper into claustrophobic horror terrain. There’s little commitment to any particular tone – it never leans too far into idle B-movie pleasures, nor is the material elevated with nuanced character work. The context and the devious revelations of the crew’s real purpose end up amounting to little more than background noise.

A debut feature with an interesting premise.

A film that frustrates more than it thrills.