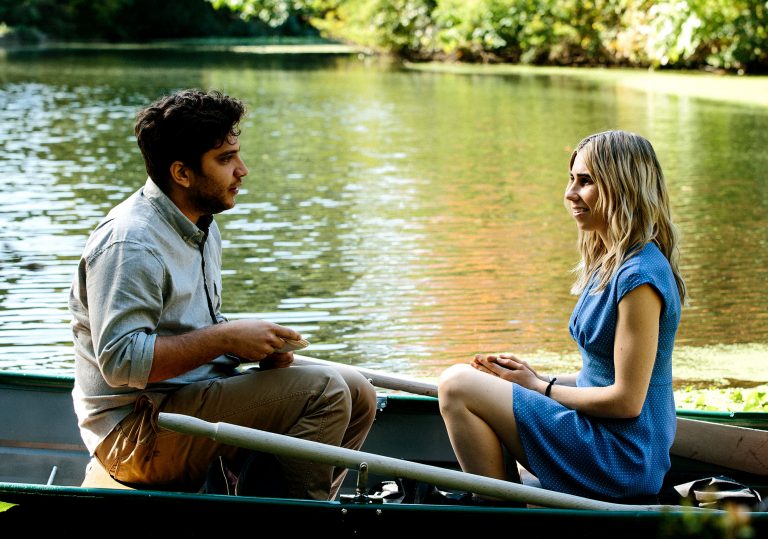 A comedy of humiliation set in a Hipsterville, NY. Could work?

The central situation is way too contrived to engage with fully.

Maybe seek out a Noah Baumbach film instead.

Zosia Mamet stars as a wayward writer forced to confront a past romance in this underwhelming quirk-com.

We’ve all been there. It’s perhaps one of the most relatable and ickily awkward situations you could ever imagine: accidentally moving into a swish, airy, high-ceilinged Brooklyn apartment only to discover that your ex boyfriend is shacked up with his new squeeze down there in the basement. His head is literally just underneath your feet. And what to do when you bump into them both? How to act? What to say? And – hey – wasn’t the whole point of this new rooming arrangement to get as far away from this guy as is physically possible?

The gaspingly awful and ridiculously contrived set-up of this lightly comic debut feature by Sophie Brooks makes it difficult for any of its ideas and emotions to be taken seriously. As characters converse, as situations unfold, as old feelings wheedle their way back to the present, there’s always the nagging thought: why the hell did she move in above her old boyfriend? Why would someone do that? And it’s not even some depopulated rustic burg with limiting boarding opportunities. It’s the bustling metropolis of New York City.

Zosia Mamet plays ditsy Diana, an unlucky-in-love writer who is back in the US after a short stint in London and on the prowl for new challenges starting a new “chapter” of her life. Like most romantic comedies of this ilk, it rides on a brand of cheap designer cynicism where most of Diana’s quips or silly jokes are met with stone-faced distain from the people with whom she interacts. Estate agents, it turns out, don’t have a sense of humour. Mamet tries as hard as she can in what is a fairly thankless lead role, but the material often doesn’t match up to her determination to make this character feel real and relatable.

As the story plays out, we discover that she is still warm for her ex-boyfriend’s form, but needs to keep a cool front lest he’s not up for reciprocating. It’s made all the more distressing by the fact that she was the one who broke it off with bespectacled, sensitive Ben (Matthew Shear) originally, and now she is also wondering if it was the right decision to make. With her life in something of a mild tailspin, was this relationship the one thing that kept her anchored to reality, and happiness?

Visually, the film seldom offers anything particularly tantalising, instead soaking up the insipid whites, greys and creams of the affordable designer decor of the locations and smart-casual costumes worn by the characters. There are signs that Brooks knows how to put a film together, and even though this one never really gets off the ground, it’s still a valiant first effort.

A comedy of humiliation set in a Hipsterville, NY. Could work?

The central situation is way too contrived to engage with fully.

Maybe seek out a Noah Baumbach film instead.