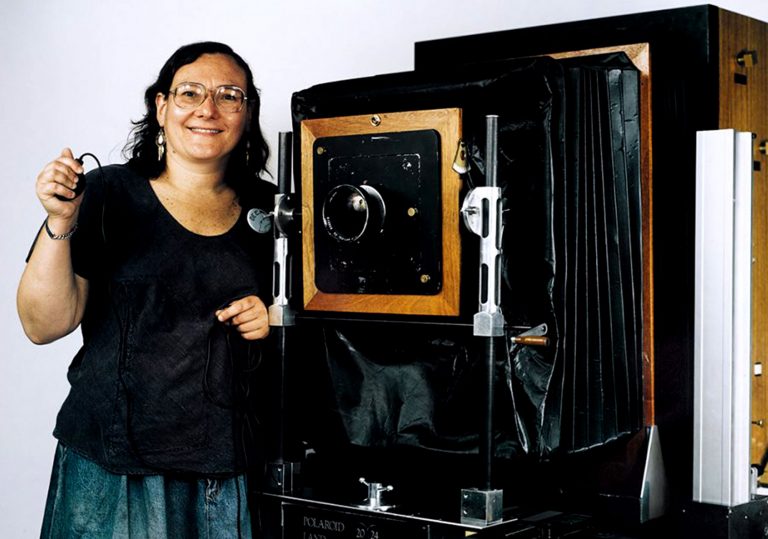 Its warmth is irresistible even if its specifics feel instantly fleeting.

There’s a lot more movie contained within this charming oddity, but only for those who are willing to look deeper.

In his latest character sketch, The B-Side: Elsa Dorfman’s Portrait Photography, groundbreaking documentarian Errol Morris has trained his sophisticated cinematic eye on Elsa Dorfman, the well-known if not exceedingly famous American photographer who came to fame for her giant Polaroid portraits of people both noted and normal.

At an incredibly fleet 76 minutes, The B-Side is an unmistakably minor work from a filmmaker who rejiggered the entire nonfictional medium nearly 30 years ago with his true-crime landmark The Thin Blue Line, which remains an emotional, revelatory masterpiece even amid a deluge of real-life procedurals that likely wouldn’t exist without Morris’ dazzlingly thorough template.

Conversely, The B-Side doesn’t deal in any big emotions, revelations, or set pieces. There’s nothing deceptively grand about the simple straightforwardness of Morris’ structural conceit, which places Dorfman front and centre, capturing her as she rummages through her seemingly endless archives, digging up photos and reminiscing accordingly. In fact, the only thing big about the film is Dorfman’s blown-up, 20-by-24 inch photography, taken with a massive Polaroid camera that makes for a truly imposing set-up, at one point described, quite accurately, as “a room with a lens”.

The initial inclination might be to dismiss The B-Side as a traditional, throwaway effort from a documentary legend who has simply put his feet up and directed the thing on muscle memory alone. But to do that would be to ignore the luminous, feel-good charm that radiates from every angle of Morris’ film, which is a feat that can only be attained by a filmmaker whose expert craftsmanship never comes at the expense of imbuing his stories with a distinctive mood and personality. The B-Side is indeed a minor work, if only in matters of size and scope, but there’s nothing minor about the insights that surface from this tender and touching ode to the humane power of personal art.

It helps, of course, that Dorfman herself is such a captivating subject and a most disarming storyteller, with her chowder-thick Boston accent casually slipping the “r”s out of words so that a name like “Harvey” (her husband, seen mostly in home movies interspersed throughout the film) becomes, adorably, “Ha-vee.” Describing herself early on as “one lucky little Jewish girl who escaped by the skin of her teeth,” the now 80-year-old Dorfman was a late bloomer who studied teaching at Tufts, flocked to New York, toiled away as a secretary, and didn’t pick up a camera until she moved back home to Cambridge, Massachusetts at the age of 28.

She began with direct, black-and-white self-portraits that were emotionally and physically revealing before ultimately turning her lens on other subjects, ranging from music icons like Bob Dylan and Joni Mitchell to leading counterculture figures like Andrea Dworkin, Audre Lorde, Anaïs Nin, and Allen Ginsberg, the latter of whom befriended Dorfman in the ’60s and remained a close companion until his death in 1997.

In one artfully-composed passage, Dorfman describes the experiences of shooting Ginsberg and later bidding him farewell, a lovely but never maudlin testament to the ways in which photos can trigger certain emotions and lived moments. This isn’t a new insight by any means, but rarely has it been applied so movingly to the person behind the camera, allowing this biographical documentary to unfold with the beautiful, thoughtful unpredictability of a memory piece.

Dorfman’s real artistic triumphs are arguably those large-format Polaroid portraits of regular people, who are captured raw and unguarded, attempting to be no one other than their everyday selves. Dorfman takes the most palpably infectious pleasure in these works, making it easy to savor her endearing, detail-filled recollections of the quirks and particulars of the thousands of faces that have stopped, however briefly, to pose in front of her camera. And that brevity, for Dorfman, is the key. “I’m not interested in capturing their souls,” Dorfman says at one point, shrugging off the preciousness that usually accompanies fawning, feature-length impressions of artists.

What sets The B-Side apart from other profiles of this ilk is Morris’ willingness to let Dorfman’s character infect the character of the film. We’re not just watching a misty remembrance about the making of an artist but a film defined by an artist’s central tenets, forever evident in the relaxed, loosely-composed snapshots that make up the bulk of her output. “It doesn’t matter how much you try to nail the down the now,” Dorfman opines at one point. The now is really beyond you.” In one archived interview from the 1970s, Dorfman denies that the camera tells the truth with the same firm principality that she will later exhibit in the present-day when she rebukes – and even drily mocks – the idea of imposing a narrative structure on her career.

A structure nonetheless manifests in The B-Side, if only because of the bittersweet occasion on which the project was made: Dorfman’s retirement, which itself has coincided with the steady death of the Polaroid that was set into motion by the company’s 2001 bankruptcy. The B-Side, then, is much more than a cinematic valentine gifted from one friend to another but a collaborative, multimedia swan song, a modest embrace between images both still and moving. In achieving this, Morris has adopted Dorfman’s own trademark affection, suffusing his film with the same decisive optimism that has defined her life and work, which are rendered here as exquisitely and stirringly synonymous.

Its warmth is irresistible even if its specifics feel instantly fleeting.

There’s a lot more movie contained within this charming oddity, but only for those who are willing to look deeper.