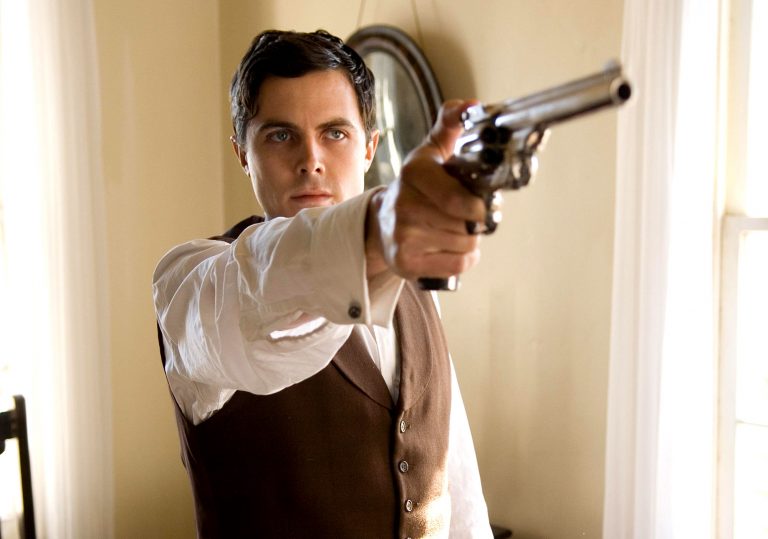 Post-Babel, post-Brangelina, Pitt gets his own show.

It’s a guaranteed critical split. If you love it: Four. If you hate it: Ziltch.

Can still see it, smell it, taste the tears.

The Assassination of Jesse James reeks of the haunting inevitability of death, in which the ending carved into the title hangs over the entirety, not morbidly but thrillingly, daring you to invest in the hero.

Like Beowulf, Jesse James (Brad Pitt) is laden in skins and heavy with sin, traversing the outback, seeking resolution or retribution. Like Odysseus, he leaves his wife and children in a quest – the repercussion of his criminal actions – but always dreams of home. To find peace. To die.

Greek too, this is a film that exclusively prioritises men: how men love, relate to and betray each other. The political machinations of power and trust are as complex between The James Gang, the ‘bottom feeders’, as in Caligula’s court.

Conventionally speaking, the film is too long, too slow and has endless codas. It draws an obvious parallel between Jesse James and the cult of contemporary celebrity. As the first American idol he has the dangerous fan (Casey Affleck’s Robert Ford), his entourage, his press, his mythology, but in many ways this is the film’s least interesting aspect.

What is completely compelling about this depiction of James and his men in their final throes, their last robbery, their disintegration, is the depiction of male vulnerability, co-dependence and interaction. This is the best portfolio of character studies in years, neither pseudo or sensitive, the result of superb direction throughout from Andrew Dominik.

The gang kick off discussing ‘cunts’ over ‘chaw’ (“And the stew needs noodles,” adds James). And the frank brutality, frank reality continues when they shoot and gnaw at each other. But the machismo is always offset by thought, emotion, conscience, aesthetic context and query. Robert Ford’s growing awareness that his hero is a flawed and real man holds a mirror up to James for all of us. Casey Affleck almost steals the film from Pitt who just manages to supersede his own celebrity and convince.

One could be accused here of simply falling for beauty, so stylised is the film’s surface. Pitt and Affleck are so mesmerising physically that it could be one long superficial seduction. Except you can feel the rough corn tips scuffing your fingers and you reel as Pitt severs snakes heads, beats a boy and Affleck shoots grown men stone dead.

And it is precisely this combination of style and content that shines – alongside the confidence to let this film be what it is; an opus, an epic and not a crowd pleaser.

Post-Babel, post-Brangelina, Pitt gets his own show.

It’s a guaranteed critical split. If you love it: Four. If you hate it: Ziltch.

Can still see it, smell it, taste the tears.