It’s been a while since Clooney the filmmaker struck gold.

Inspired by events in Levittown, Pennsylvania in 1959 – when a well-to-do African-American family were violently harassed by white supremacists shortly after moving to the all-white suburb – George Clooney’s latest directorial outing could hardly feel more prescient. Updating a 1980s Coen brothers screenplay which crackles with trademark tropes and flourishes, Clooney revises the Blood Simple-era material with bite and sizzle. Although shooting wrapped a year ago, the lm chimes with America’s current POTUS–sanctioned race war. Clooney’s instinct for storytelling now means that Suburbicon take on a whole new layer of meaning.

Matt Damon and Julianne Moore are Gardner and Rose Lodge, an apparently perfect American couple: him a suit-and-tie vice president at an ad agency, her a housewife with an inquisitive but isolated young son to raise. When the family – augmented by Rose’s identical sister Margaret (also played by Moore) – falls victim to a home invasion, the neighbours are quick to blame the black newcomers for an ensuing tragedy.

But Gardner, who seems strangely unflustered during this ordeal, has more than his share of secrets, which soon begin to spill out as the action turns more violent, in a deranged and satirical way.

Damon and Moore are particularly good here, with the former releasing his pent-up rage like a man dispossessed, and clearly enjoying playing against his goodie-goodie type. Oscar Isaac provides support as an oily insurance man who wants more than a cut of the action. It’s deliciously dark stuff, with brutal mobsters contrasted by laughably stiff suits, neither of whom have any clue what their everyman victim is capable of.

The racial elements, added by Clooney and co-writer Grant Heslov, flesh out what would otherwise feel like familiar Coen territory. Indeed, as Clooney happily clarified during the press call at the 2017 Venice Film Festival, the reason why the script had been gathering dust for so long was simply because the Coens felt they had covered this territory already. Given this unusual scenario, it feels quite the treat to see a filmmaker like Clooney pick up an unpublished Coen script and run hell for leather with it.

Behind the veil of respectable suburbia lies a well of sin just simmering under the surface. The couple’s son Nicky (Noah Jupe) accidentally walks in on Gardner spanking Margaret with a ping pong bat (S&M 1950s-style), while it becomes evident that the two adults have been plotting some saucy, sordid business for quite some time. A running gag about eloping to Aruba (a Dutch protectorate) works nicely as the tension builds to a devilishly effective climax.

Suburbicon, which is lensed by There Will be Blood’s Robert Elswit (and boasts a strong score from Alexandre Desplat), is Clooney’s most startling work behind the camera since Good Night, and Good Luck – and something of a return to form after the best-forgotten romp that was The Monuments Men. With a clear sense of story and purpose, the film not only serves as a shot in the arm for independent narrative cinema, but also as a rallying cry for those determined not to see the US go to the dogs. Clooney is unashamedly patriotic, and this often comes through in his work, no matter how wayward the characters. Long may it continue.

It’s been a while since Clooney the filmmaker struck gold. 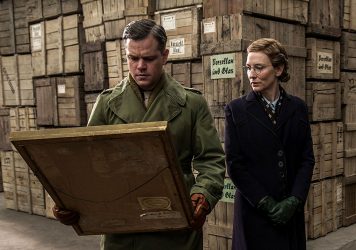 George Clooney socks it to the Nazis in this rambling adventure yarn with an all-star cast.