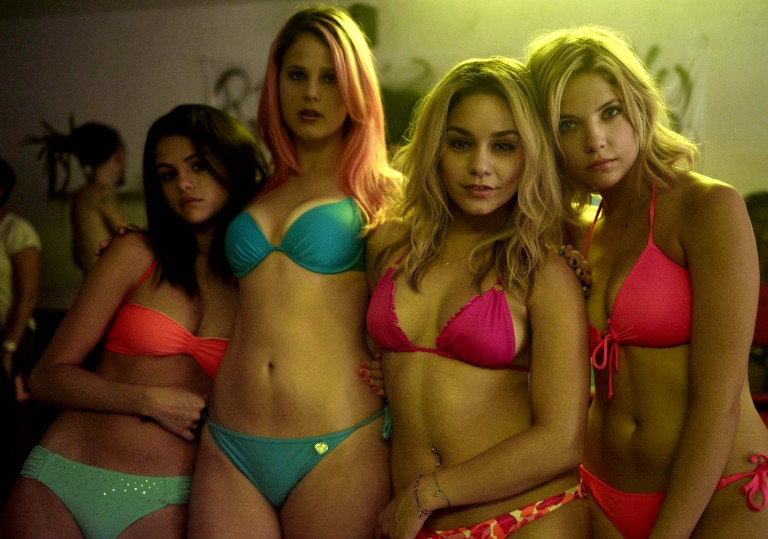 Is Harmony Korine a Britney Spears fan? It’s a question you might be surprised to find yourself asking while watching his lunatic teen odyssey, Spring Breakers. In the film’s standout sequence (and an early contender for scene of the year), a nod to the one-time princess of pop’s heartrending ballad Everytime provides an oblique reminder that in Korine’s world, pathos is a (false) virtue.

Ashley Benson, Selena Gomez, Vanessa Hudgens and Rachel Korine (the writer/director’s wife) play four college friends who pull off an audacious squirt-gun robbery on a Chicken Shack in order to fund the ultimate midterm vacation in south Florida (aka coed Mecca). They seek excitement and new experiences, anything to offset the tedium of dorm life and sate their adolescent impulses. This being a Harmony Korine film, they get a little more than they bargained for.

There’s a certain self-reflexive irony in seeing a former Disney Channel starlet get her superfreak on to Skrillex while being soaked in cheap beer and frat boy hormones. So too in the fact that Selena Gomez’s nubile Christian (aptly named Faith) high-tails it before the bong hits and bum-shaking give way to more unsavoury extracurricular activities. Incidentally, Gomez has publically warned her young fans against watching the film. Because god forbid any impressionable preteen might actually subscribe to this R-rated first-world fantasy.

And then there’s James Franco, smashing it out of the park as Alien, a cornrowed, dental-grill-sporting Kevin Federline-a-like who bails the girls out after they get busted at a druggy house rave. His vulgar beachfront pad is a shrine to bad taste and criminal excess, crammed with military-grade firearms, Class A drugs and neatly piled wodges of hundred dollar bills. He’s got gold bullets and a Scarface DVD on a constant loop. He’s the living embodiment of the American Dream.

There’s a flavour of Gaspar Noé provocation in the film’s hyper-fluorescent palette and recurring Girls Gone Wild motifs – indeed Korine enlisted Noé’s regular DoP Benoît Debie. Yet it’s telling that Spring Breakers is no more explicit than your average mainstream teen romp. Korine could so easily have pushed it further, but at times it’s almost as if he’s holding back.

Perhaps he wants this uniquely subversive critique of youth culture to be taken seriously. Perhaps there’s more to Spring Breakers than crunching synth and jiggling flesh. In the desaturated comedown before the third act storm, the girls leave voice messages to their loved ones, expressing a mutual desire to be better people and make something of themselves. They seem sincere enough, but Korine’s greatest trick is to make you read beyond the instant gratification and superficial pleasures that saturate this blissfully warped utopia.

So is Spring Breakers satire or exploitation? Does it really have something profound to say about how declining social values are leading Generation Z astray? If you’re left mulling any of that over, you’ve really missed the point. 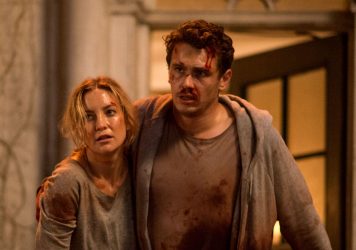 James Franco and Kate Husdon bring their B game to this stock urban crime thriller.