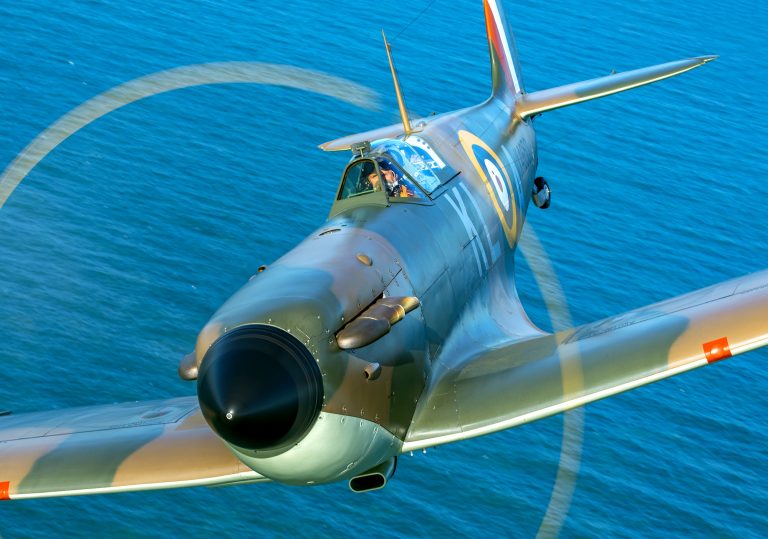 This wave of British patriotism is painfully artificial.

Listening with a respectful smile and a knowing mind. The cinematography is stunning though.

An uncomfortably romantic ode to war.

Charles Dance narrates this beautiful and bombastic tribute to the RAF’s most iconic fighter plane.

Britain is in the grip of a renewed jingoism – as things fall apart, the nation holds on to past glories. In this film celebrating the centenary of the Royal Air Force, documentarians David Fairhead and Ant Palmer have set their sights on the Spitfire as an emblem for national reminiscence. Their interviewees, from modern day fighter pilots and museum curators to surviving squadron members, repeatedly describe this machine of war as “beautiful” – an anachronism that just doesn’t feel right anymore.

The trouble with Spitfire the documentary is that it is beautiful. John Dibbs’ aerial photography is spectacular, his footage of planes darting through the sky worthy of Christopher Nolan’s Dunkirk. Its widescreen splendour is expertly intercut with archival newsreels, mirrored in transitions from World War Two announcers to the booming tones Charles Dance’s narration. It ends up working better as a piece of cinema than as a source of information.

Given that this film is most likely to attract an older audience, it might get away with its dramatic rendering. For an outsider, the bombast and bluster are grating – clouds darken at the mention of the Luftwaffe as a thundering score plays over a muffled Hitler speech. There are no Germans interviewees reflecting on how they felt about the RAF, and while it is noted that RJ Mitchell’s original design was likely stolen from the enemy, its inclusion feels more a niggling obligation than a commitment to objectivity.

Still, there is an undeniable charm to the cohort of nonagenarians sharing their stories. Some of them are morally conflicted over their sense of pride, while others feel little shame in relishing the moment they shot down their first enemy plane. The Battle of Britain to D-Day are retold with bouts of “tally-ho!” and “cock-a-hoop!”, capturing a nostalgia that no longer feels appropriate for discussions of war. But we have to hear them out, in their own terms, because this might be the last opportunity they get. Despite contemporary misgivings, it is a fine film with which to remember them.

This wave of British patriotism is painfully artificial.

Listening with a respectful smile and a knowing mind. The cinematography is stunning though.

An uncomfortably romantic ode to war.