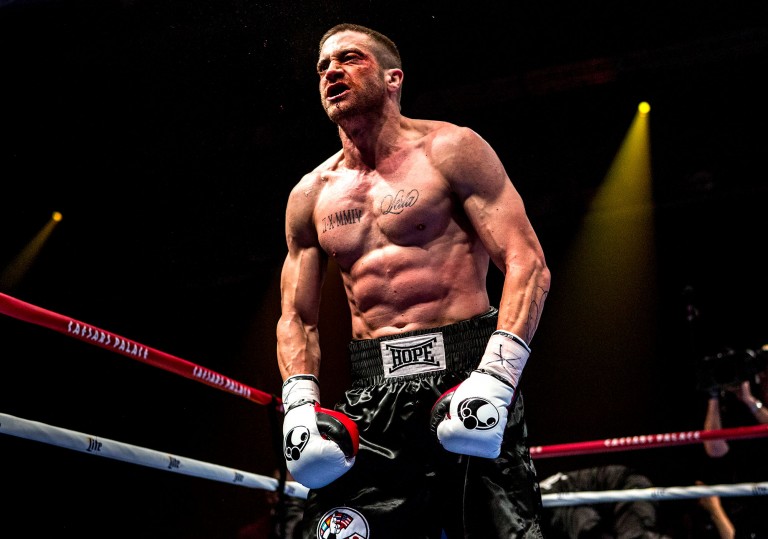 Always up for going a few rounds with Jake “The Snake” Gyllenhaal.

Gyllenhaal losing his shit is a lot less fun than it sounds.

Boxing is all about subtext. Any time two pro fighters step into the ring you can guarantee their respective camps, willingly aided by the media, will have spun some narrative or other. Invariably there’ll be a point to prove or a personal score to settle – a fight is never just a fight. Yet by far the most compelling thing about this most primal of sports is that the hype-stoking public spats and pay-per-view touting trash talk ultimately counts for nothing when the bell sounds. The beauty of boxing is that the best man – or fighter, if you want to get technical – always wins.

At least, that’s what the movies have taught us. Specifically the kinds of movies that seek to elevate our sporting heroes (both real and fictional) to superhuman status by perpetuating the popular belief that true greatness is not measured by one’s physical attributes but by the presence of a deeper-lying, infinitely more powerful strength that is less easy to quantify yet at the same time undeniable. It’s about having the guts, getting the glory. It’s about hanging tough, staying hungry and always rising up to the challenge of your rival. It’s the eye of the tiger.

In Southpaw, we meet New York brawler Billy Hope (Jake Gyllenhaal) on top of the world. A sell-out title bout has just taken the undisputed light heavyweight champ’s record to 43-0, and as ever, his loving wife and childhood sweetheart Maureen (Rachel McAdams) had a ringside view. Only this time, something’s different. For the first time in his career, Billy doesn’t look like a champion – his raw, seeping face telling the story of a contest that was a lot closer than perhaps it should have been. Pain may come with the territory in this line of work, but in this instance it seems that Billy went looking for punishment. Insouciantly, he reminds Maureen that getting angry makes him a better fighter; tearfully, she reminds him what he risks losing.

A tribute inked large across his left pectoral muscle tells us that Billy is a devoted father to young Leila (Oona Laurence). Other tattoos reveal more about his make-up: “Fear No Man” screams one shoulder-width motif. Early on we’re told that Billy, like Maureen, was a Hell’s Kitchen orphan – the product of a system he’s been fighting against his whole life. As one commentator points out during Billy’s successful title defence, he grew up just a few blocks and a million miles away from the showtime grandeur of Madison Square Garden. All he’s ever asked for is fair chance in a tough sport. Subtext.

With Billy’s backstory neatly unpacked, director Antoine Fuqua and screenwriter Kurt Sutter (who judging by his IMDb profile photo is no stranger to a scuffle) waste no time in flipping the time-honoured rags-to-riches sports movie arc on its head, an unexpected family tragedy becoming the catalyst for an abrupt switch from ring to courtroom. The result is underwhelming to say the least, with Fuqua and Sutter ineffectually using every cliché in the book to keep us rooting for Billy. By the time his inevitable shot at redemption arrives, we already know how it’s going to play out (i.e. exactly according to convention).

Too often the script mistakes violent outbursts for actual drama. This is blood, sweat and tears acting of the highest order from Gyllenhaal, but considering the film is fundamentally about a father trying to reconnect with his daughter, it’s frustrating how little opportunity he’s given to flex his dramatic muscle. Ferociously upending furniture and snarling down the camera is all well and good, but Gyllenhaal’s committed portrayal of the underdog who doesn’t know when he’s beaten – performed for long stretches through swollen eyes and bloodied teeth – deserved a filmmaker bold enough to try a few unorthodox combinations.

But no, instead we get a stock training montage, lazy idiomatic riffs on our protagonist’s last name and an entourage of underdeveloped supporting players. (Forest Whitaker is well cast as the smalltime trainer who gives Billy a second chance; Curtis “50 Cent” Jackson less so as the mercenary promoter who proves there’s no such thing as loyalty in boxing as long as there’s cash money to be made.) Like a first-round knockout, Southpaw gets the job done, but it’s all just a bit anticlimactic.

Always up for going a few rounds with Jake “The Snake” Gyllenhaal.

Gyllenhaal losing his shit is a lot less fun than it sounds.