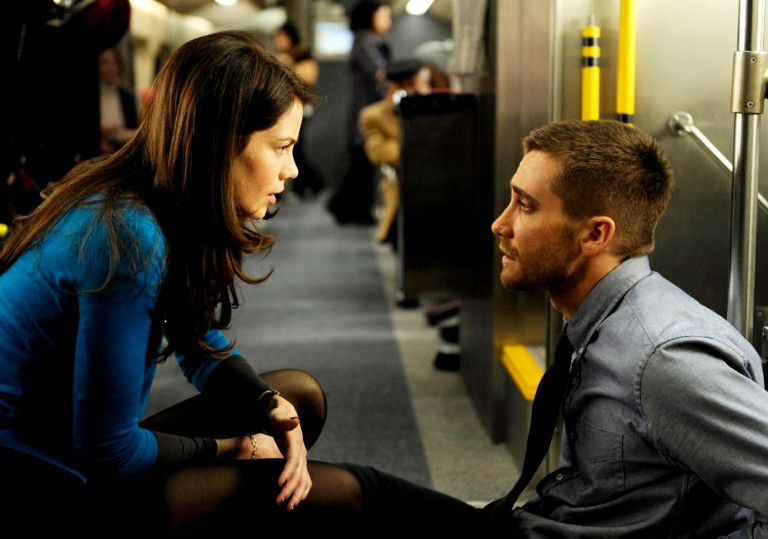 Jake’s on a train. Is Jones on a roll?

Stylish, fun and well-crafted, even if it is a bit silly.

Jones has hit the ground running, but there’s no need for Nolan to watch his back just yet.

Just as Sam Rockwell played a lone protagonist on an unenviable mission in Duncan Jones’ slow-burning 2009 space oddity, Moon, so Gyllenhaal finds himself swimming against the unrelenting tide of fate as Uncle Sam-loving Captain Colter Stevens in the British director’s urgent sophomore feature.

The occasional stray shard of existentialism is all that is allowed to penetrate Source Code’s heavily lacquered outer shell, but you get the sense that Jones is keen to emphasise a kinship between his two forsaken male leads. As Stevens takes on another man’s identity in the last eight minutes of his life in order to track down and neutralise a terrorist en route to Chicago – where an imminent second attack is set to wipe the city off the map – Jones takes us deep within the recesses of the human psyche. Here Stevens’ search for big answers is greeted by hard truths and the unavoidable acceptance that his mission is bigger than one man.

Every minor detail in the ‘simulated’ world he now inhabits (aka ‘the Source Code’) is of major significance, but with Colter asking the questions – “why eight minutes?” – we can’t help but allow ourselves to be sucked into his shoes. While he’s stuck on repeat, skipping between conscious and pseudo-conscious states like a dusty LP, we too begin to see things differently. As the clock ticks and clues come and go, this commuter wagon becomes haunting in its arbitrariness; the devastation to come echoed only the stress-torn face of its clued-in guardian.

Gyllenhaal’s dramatic prowess is once again imperious, but his doe-eyed boyishness gives him a vulnerability that is absolutely crucial in establishing our initial doubt over his character’s fortitude in the face of a predicament most would struggle to wrap their head around. Indeed, he is not just believable as a soldier, but as a son. Human and fallible.

On this note, while fragments of strained paternal bonds will come together to form a picture of our hero’s past, it is the two women in his inadvertently adopted life that will determine his destiny. Michelle Monaghan is well cast as the big-hearted love interest, but it is Vera Farmiga as Stevens’ real-world liaison who forms the more intimate connection. As Stevens is gradually awoken from his state of denial, the compassion forged in this complex relationship imbues Source Code with something that previously set Jones’ debut apart from other flashbang blockbusters – soul.

Where Moon was made as a retort to the toothless disposability of mainstream cinema, Source Code is no more conspicuous about its influences. So while comparisons to Unstoppable and Groundhog Day are inevitable (you’ll be half expecting the on-board announcer to exclaim, ‘Please mind the gap, it’s a doozy!’), Hitchcock and Scott (Ridley – early, not recent) are given the biggest nods.

Striking a balance between substance and spectacle was always going to be Jones’ biggest challenge here, but it’s one that he has risen to admirably, even if the sparks of originality and staunch pragmatism that rocketed Moon up Top 10 lists two years ago have been noticeably dulled. That Source Code is not the vanity project it might have been will be greeted with a collective sigh of relief from Jones’ fan base. But audiences are fickle. The Moon bubble has long since popped, and Jones had little option but to hit the ground running.

All things considered, what’s truly refreshing is that there’s nothing ostentatious in Source Code’s scope or execution – it’s not watertight, but it’s fun, economical and, most importantly, never dull. And while the inevitable happy ending shows that Jones is still some way off earning complete creative autonomy on a production of this scale, a last gasp bombshell suggests that he’s at least got the cojones to leave his mark where it matters.

Jones may have passed his first real Hollywood test with merit, but he has wisely avoided trying to make this his calling card movie. Here’s betting he’ll be back with something more personal and profound in 2012.

Jake’s on a train. Is Jones on a roll?

Stylish, fun and well-crafted, even if it is a bit silly.

Jones has hit the ground running, but there’s no need for Nolan to watch his back just yet.