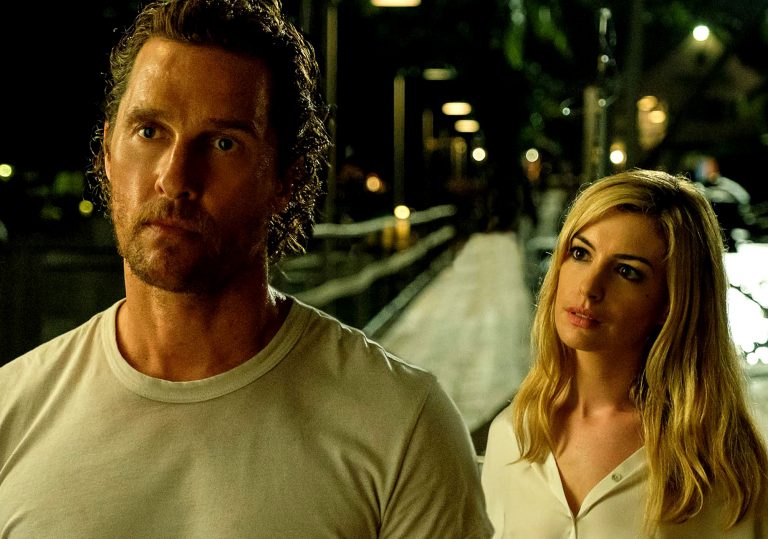 The final nail in the McConaissance coffin.

The following is a transcript of an audio conversation between the actor Matthew McConaughey and his Hollywood talent agent concerning the film Serenity.

Agent: Great. So, you know how you’re always talking about wanting to do another Chris Nolan movie? Well, I’ve got the next best thing! A fan-tastic script just came in for the new Aviron Pictures release – they did A Private War with Roz Pike. The studio likes you for the lead.

Agent: Not exactly. There’s a little bit of backstory about a war – Iraq or somewhere – but the part is a fishing boat captain called Baker or John or Johnny or Dill or something. I only skimmed through it. The script needs a second draft but I’m sure that’ll be looked at.

Agent: You could say that… It’s not really about fishing though. It’s about the nature of existence and how we’re all connected, yada, yada, yada. Something about a murder plot. Oh, and something about a computer game but that doesn’t really seem important. Pretty high concept stuff. Aside from the boat scenes it’s mostly just you driving through cornfields, staring bleary-eyed into the middle distance, standing around with your shirt off – your usual repertoire.

Agent: HA! See, I’ve always said you should never have stopped doing comedy but do you ever listen… You know I ran into Adam McKay the other day – he told me he’s just started prepping his next movie about Jimmy Dean, you know, the sausage guy. Want me to mention you to him? You never know, there could be another Oscar in it for you. Look what he did for Christia– Oh, could you hold a sec Conny, I’ve got Woody on the other line…

Agent: I swear, that Woody is such a card. Sorry hun, where were we?

Agent: Jason Clarke, Diane Lane and Djimon Hounsou are all attached. Oh – you’re gonna love this – and Annie Hathaway! You two had such great chemistry on Chris’ movie, remember?

Agent: Steven Knight. He did that fun little movie Locke, with Tom Hardy? Didn’t see it myself but they say he’s very talented. And he’s British!

Agent: Mauritius. Six weeks. You can top up that gorgeous tan of yours!

McConaughey: Uh-hmm. An’ what’s my cut?

Agent: I’ve been meaning to talk to you about that. Now, his casting agent didn’t say why exactly, but they ended up going in a different direction…

The final nail in the McConaissance coffin.